I know generally speaking Alex Smith does not equal Tom Brady. It's not exactly a shocking statement. But last night's game further reinforced the fact that Tom Brady and players like him often seem to play by a different set of rules than the mere mortals of the NFL. Considering Brady is one of the faces of the NFL and basically had a rule named after him, I suppose some kind of preferential treatment shouldn't be surprising. I remember watching one play I believe last season where Brady was tackled after throwing the ball and when a flag wasn't forthcoming he basically stared at the ref until he threw a roughing penalty.

Last night as the 49ers were getting beaten down by the San Diego Chargers, one of the many issues I had with the game was the fairly questionable officiating. Aside from the questionable (in my view) decision to flag and toss Justin Smith, I thought there were numerous instances of problematic calls by the refs. The NFL has made a move to crack down on some of the late and big hits, most notably to quarterbacks, but last night's game saw some rather fishy judgments by the referees.

Before going on, there was some discussion last night about the fact that the judge who tossed Justin Smith, Garth DeFelice, is from San Diego. While on its face that seems a little sketchy, I have to think that's a huge coincidence. I noticed some folks questioning it but would the NFL be that blatant about something like this? I just can't imagine that.

After the jump, I've posted some pictures from last night to point out some of ref'ing issues. They're taken from TV so they're not the best pictures, but they help illustrate the problems from last night's game.

This first play came late in the game after the Chargers had things in the bag. In fact, it came on the 49ers last offensive play of the game. I've attached three pictures showing the sequence as best as possible without video. For those thinking it looks weird, it's because I used my laptop and so the pictures are actually backwards.

As you look through the three pictures, it starts with Smith being grabbed by defensive tackle Cam Thomas (on the far left side of the picture). Thomas grabs ahold of Smith and as he takes him down he leverages Smith a bit and drives him into the ground. It wasn't quite like a typical flagged play, but he appeared to pick him up much like a rag doll. He had a firm grip and often times you might see that play get blown dead as a sack before the potential for a QB to get hurt.

I've had my complaints about the excessive number of roughing the passer penalties we seem to be seeing in 2010, so I suppose it might be considered somewhat hypocritical of me to complain about a lack of such a call. However, this play seemed to go beyond some of the ticky-tack garbage refs have been calling. And if refs really are going to impose serious discipline for this kind of stuff, then this should have been ruled roughing.

It's not the best example of the roughing personal foul, but I'm fairly certain a QB like Brady would have gotten the call. I realize it was the end of the game and Smith is not Brady, but that's no excuse. And yes this is basically now just whining about Brady's advantage with refs, but I really don't care. I'm pissed off about last night and I feel this is a worthy venting of my anger.

After the three pictures, I take a look at Tarell Brown's "late hit" on Kelley Washington. 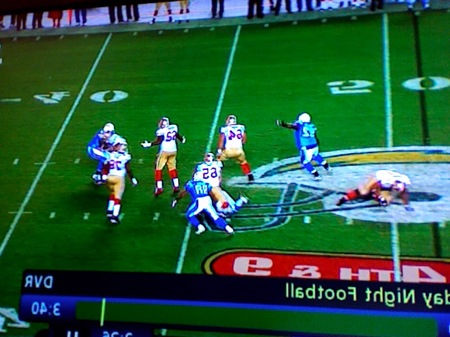 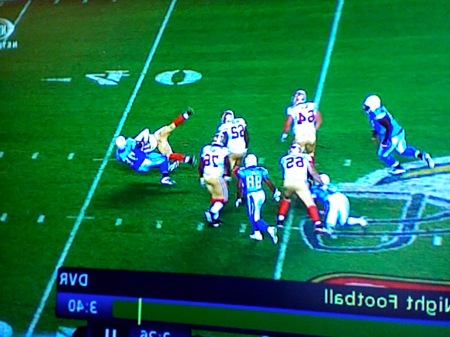 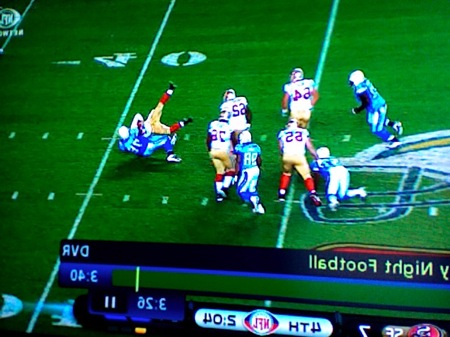 On this play towards the end of the second quarter, Kelley Washington had caught a Philip Rivers pass on a crossing pattern and proceeded to gain 36 yards. As Washington was starting to make his way out of bounds, Tarell Brown dove into tackle him. Picture 1 shows Brown beginning his tackle and Picture 2 shows him actually hitting Washington out of bounds. Washington fell after that second picture and was banged up on the play.

The hit itself did take place out of bounds, so technically that makes it a "late hit." The problem I have is that Brown began to propel himself towards Washington before Brown had stepped out of bounds. The argument could be made that Washington appeared to be making his way out of bounds and thus Brown should have pulled up.

I'm sure in both of these I can be accused of favoritism as a 49ers fan. If that's the case then so be it. I see what I see and I call BS. There were several other examples of bad plays, but I thought these were two of the more glaring. 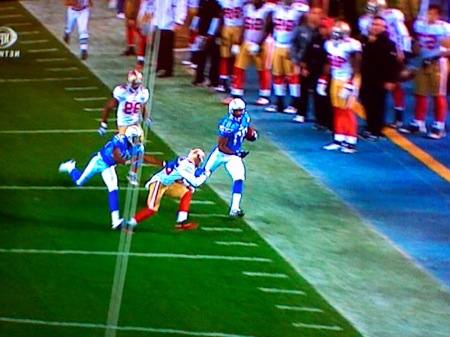 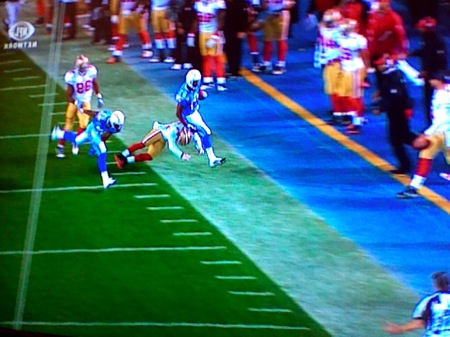