Thursday loss to San Diego was caused by numerous problems including poor 49ers defense, strong Chargers defense, and poor 49ers offensive execution. In a 34-7 loss it's hard to say one single play changed a game. However, I'm going to try and do just that with the 49ers loss at San Diego.

Although it's entirely possible the 49ers would have been annihilated no matter what, I would argue that the team's first appearance in the red zone swung the momentum of this game drastically. Momentum appeared to be swinging in their direction at that point. The 49ers had given up the big touchdown pass to Vincent Jackson and appeared ready to get absolutely destroyed. After an exchange of two punts, the 49ers moved into the Chargers red zone before stalling out on the 20 and kicking a field goal. However, the ref's flagged Antonio Garay for leverage after he used a 49ers offensive lineman to leap in the air and get a piece of Jeff Reed's made field goal.

After two relatively unsuccessful plays, Alex Smith appeared to scramble 7 yards into the end zone for a game-tying touchdown. However, on the replay the officials overturned the touchdown and ruled Smith down six inches short of the end zone. I've posted three pictures after the jump and I think it shows Smith was in fact short. Picture three isn't the best picture but a combination of pictures one and two seem to show Alex short of the end zone.

Whether he was in or not, I would argue that play changed the momentum of the game. We'll never know what would have happened, but maybe Justin Smith is never in a position to get ejected on the subsequent drive. Maybe the 49ers get some confidence across the board and hang with the Chargers. It's all the woulda, coulda, shoulda that has made up the 2010 49ers season, but it's worth considering given how quickly things went to hell on Thursday. 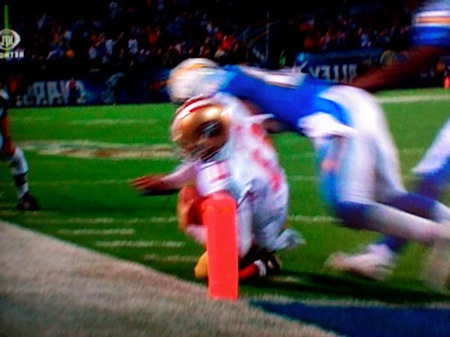 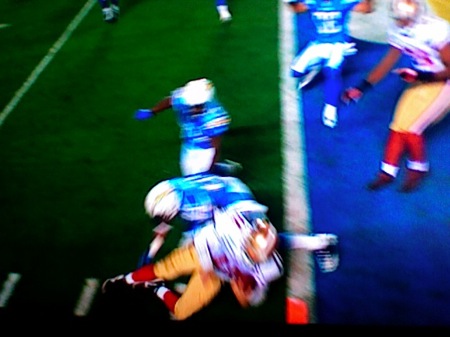 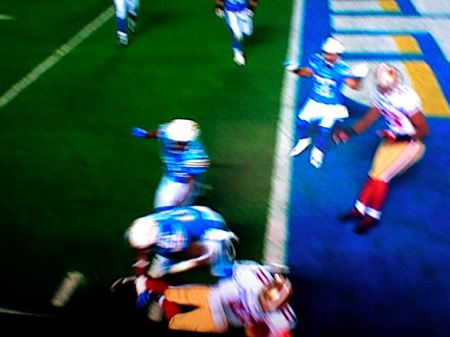