Pizza could potentially be the most exciting thing about this game. Remember the bigfoot pizza? ...What ever happened to that thing? It was one of the greatest pizza inventions ever! On a somewhat unrelated note... when .500 ball teams make bowl games, it makes most of us scratch our heads. More money, more games, and much more excitement... why on God's green earth hasn't this playoff thing (or tournament) materialized for NCAA football yet?

In any case, tonight, the 6-6 Florida International Panthers will take on the 8-4 Toldeo Rockets. Although the Rockets finished with a better record, the Panthers have a decent shot in this one as they have a few difference maker type of players that will suit up.

The Little Caesars Bowl was formerly known as the Motor City Bowl. The original sponsors were the three largest American car dealerships (Ford, Chrysler, and General Motors). The very first game took place in 1997 but was changed in 2009. The Ohio Bobcats and Marshall Thundering Herd were the first two to be featured in this game. Even though the Big Ten confirmed it's affiliation this year with the Bowl, they did not have any teams eligible and the alternate Sunbelt team (Florida International) accepted the invitation.

Below, I will feature some of tonights key players to keep watch on. 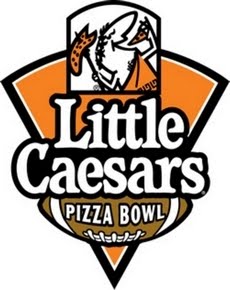 Anthony Gaitor - CB: Last year, I had Gaitor ranked in my top 20 for the cornerback position. Size will be the set back for him entering the NFL Draft, but he could wind up being a very solid nickel corner for a pro team.

T.Y. Hilton - WR: Hilton has very good hands and speed to match. He hasn't been much of a big-play threat since his freshman year when he averaged 24.7 yards a catch, but he certainly has it in him. He could be the difference maker in this game should the Panthers pull off the upset.

KEY PLAYERS TO WATCH FOR TOLEDO:

Adonis Thomas - RB: Thomas has been the go-to guy for the Rockets pretty much the duration of the season. He has an opportunity to go over 100 yards on the season if he can run close to 100 against the Panther defense this evening. He has the ability to make people miss and hits openings with quickness.

Summary: A couple of these guys have an opportunity to shine on national television tonight to make a case for themselves as pro scouts will be watching. As far as the outcome of this game goes, some of us couldn't care less. Unless of course you are a student of either school... in which case I apologize. Bring on the Pizza Bowl!!!