I love Twitter. My wife probably hates it just because I love it so much (and thus am constantly on my phone or computer checking it). I'm not a social-media-whore though. I have Facebook but I don't spend more than a few minutes a day on it.

To me Twitter and Facebook are for two totally different purposes and don't have any overlap whatsoever. Makes sense since they look and act nothing like one another. Let me explain:

Facebook is, for most individuals using it, a site where you and your friends and family connect. I'm talking about people you actually know personally and have met before, spent time with, probably care about. It's where you post pictures of things in your daily life - your kids, pets, places you go, crazy things you see along the way, etc. It's where you leave messages about your life's goings on for your friends to read and comment. You can message people, leave blurbs on their "wall", comment on photos, etc. It's basically your life, collected in one electronic place for your friends to see.

Sure you can use Facebook for business, following your team, etc. Chances are though, you have a lot of friends and thus a lot of things filling up your feed that you must wade through. A lot of those things are pictures, quizzes, notifications from games your friends are playing on Facebook, status updates with long comment threads following. It's not an efficient way to get brief, timely updates at a glance (unless you care about how many points Jeb Freeman scored on Bejeweled or how many answers Jill Smith got right on the "How Well Do You Know Justin Beiber" quiz).

Mixing updates regarding, say, the 49ers with all of this rubbish is just wrong. It's like going to the flea market to look for a the sports page from the newspaper.

Twitter on the other hand is different. There are no photos, quizzes, farmville (a facebook game), or cute little posts about deer hunting or sunrises. That's mostly because it's not meant for those things. You can't get what you get from Facebook on Twitter. So don't try. I'm actually glad for that. Don't "follow" (we'll explain terms later) your bestest friends on Twitter. That's lame and your 12 year old niece is the only one who does it.

In order to maximize Twitter you want to carefully choose what information you really care about. For me, that decision was obvious: The San Francisco 49ers...period.

For some people, Twitter is good for following a whole lot of things...each of which they somewhat care about. As I mentioned before though, I don't want to wade through all kinds of this and that trying to find 49ers info. Sure, there are ways to organize your "tweets" and we'll explain that later too. But I decided that the 49ers and the NFL in general were the only things I wanted in my Twitter-feed.

Who uses Twitter anyways? While I mentioned that your 12 year old niece uses it for social networking with her BFF's...by and large that is not what the nearly 190 million users are doing there. That's right, one hundred ninety million user accounts tweeting over 65 million updates per day. Still think "only teenage girls use Twitter"?

But enough about teenage girls before someone suspects me of fancying them in inappropriate ways. Let's get on to the look and feel of Twitter as well as terminology and how you use it. Jump with me! 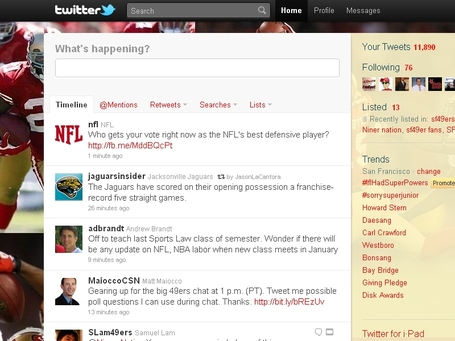 Notice these are, in my case, NFL media outlets, writers, etc. Trust me, Twitter is the first place any of the local and national media guys go with information. In fact, guys like Adam Schefter tweet breaking news more often than they write columns or go on SportsCenter...and they often do it hours before they put it in print or on TV.

Plus you don't have to wait for the newspaper, a TV show to come on, or have your email client open in front of you (if you subscribe to RSS feeds or email updates from a news website). It's kinda like having a collection of news headlines from whichever outlets you want...all in one consolidated place...and up to the minute.

So what are all the terms and such associated with Twitter? What's with all these "tweets" and "retweets" and whatnot? Let's go over the bare minimums that you need to know.

A "tweet" is an update made by anyone on Twitter. If I have something to say, I type it in and press "Tweet" and voila! Anyone following me will see that little blurb. So what about "follow" and all it's permutations? Well anyone's tweets (updates) you wish to see when you login to Twitter are people you would "follow". Once you do that you are their "follower" or you are "following" them. Makes sense...you're following their work, their updates, whatever...keeping up with them.

So what is a "Retweet"? Say you see Matt Maiocco break the news that Singletary has been fired by the 49ers. You might want to share that with people who are following you in case they missed it. They will see Maiocco's tweet but it will say it was "Retweeted" by you, in other words, you passed it along.

Similarly you will see updates in your feed that were retweeted by people you follow. For instance if the beat writer for the Seahawks tweets that Mike Williams didn't practice today...I doubt you follow the 'Hawk's beat-guys...but Matt Barrows might retweet (abbreviated RT) that info and since you DO follow Barrows, you see it in your feed. That way you don't have to see every update from people that might not be pertinent to you...but it doesn't mean you'll never see anything they tweet.

Now, there are two ways to retweet. You can choose to just retweet something as though you're passing it along. You can also choose to add a comment of your own to it, provided the entire resulting tweet is less than 140 characters.

Take a look at the picture above. You'll see something from jaguarsinsider, whom I don't follow. But you'll notice this was retweeted by Jason LaCanfora (of NFL Network), whom I DO follow. This is just a simple RT. Now look at the picture below where RCango tweeted Stephanie_ESPN (Stephanie Bell, injury expert) a question and Bell RT'd that original question along with her answer:

Next up is the @ sign. When you type a tweet you can begin it with the @ sign in order to send it to someone as a message to them. Rather than just sending something into the twitterverse for all to see (such as an opinion you wish to share with the world)...you're asking a specific user a question or sending them a message, although everyone who follows you can still see it...it's public. In the picture above RCango began their original tweet @Stephania_ESPN, which sent it to Ms. Bell's timeline as a "mention" of her username.

You can @ mention multiple users if you want to ask say, all of the beat-writers a 49ers-related question. Once you type the @ sign and the first letter of the person's name, Twitter will show you a list of users you follow that match what you've typed so far...an auto-complete feature of sorts.

The last thing we'll discuss here are Twitter clients or apps. You can just go to twitter.com in your web browser and use it there...that's fine and dandy. Some of us though want other features, and for that we use apps such as Tweet Deck. Tweet Deck is my personal choice for Twitter because it shows you various, customizable columns such as your general feed, any @mentions (people who tweeted @ you in particular), direct messages (which are private between two users), or lists (groups of user's feeds that you create). Below is a picture of how I have my Tweet Deck setup. 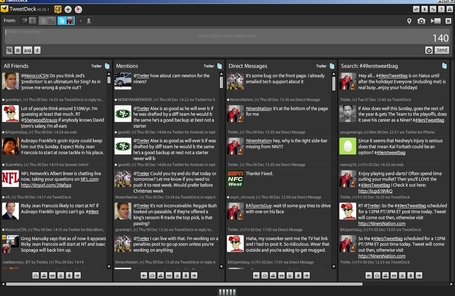 The left is "All Friends" or basically anyone I follow. Next is "Mentions" which I explained above. You don't even have to follow these people...anyone who @replies you will show up here. Next are Direct Messages like the top-secret tweets you see between Fooch and I. Finally I have the #49ersTweetBag hashtag. Oh yeah, I almost forgot "hashtags".

Hashtags are words preceded by the pound sign, or "hash". People use hashtags when they want a particular tweet to show up in a category, conversation, topic...whatever it's purpose may be. When we created the 49ers Tweet-Bag feature, I asked everyone to tweet their questions using the #49ersTweetBag hashtag so they would be grouped together for me to find them. They don't have to @reply to my name, follow me, or anything. As long as the tweet has the #49ersTweetBag hashtag, I can find it in this feed.

You can also use Twitter on your mobile device and there are apps for various mobile OS such as Twitter for iPhone, Twitter for Blackberry, UberTwitter, etc. These offer added functionality over simply visiting twitter.com from your mobile device, similar to the reasons for using Tweet Deck on your computer.

As you see Twitter is nothing like Facebook with all of it's bloat and fluff. It is, to me, the single best way to keep up on 49ers (and NFL) news and notes up-to-the-minute, and without having to wade through an entire article to get the important nuggets. Granted people do link to stories (as we do for NN posts also) and you can choose to click those links and read more...but it starts with nothing but concise 140-character-or-less updates.

So get on Twitter! There's a whole other world of conversation going on there, including (gasp) those who aren't on NN. Sure, we discriminate against them, but every now and then they bring up good points...which I steal and use for posts here on NN to make my self seem smart. You should be doing the same and now you're well-equipped to do so!

If you decide to take the plunge and join this decade, here are some people you should consider following (all you have to do is click the person's name, then "follow" once you get to this page).