ProFootballFocus.com and the 49ers offensive line

Share All sharing options for: ProFootballFocus.com and the 49ers offensive line

In 2009 the offensive line of the 49ers was among the worst in the league, there's no question about that. Being a former lineman myself I tend to pay close attention to what happens in the trenches and I've developed some fairly strong opinions on the matter. Common wisdom seems to say that Joe Staley is the best offensive lineman we have (his salary seems to indicate that the FO feels the same way); Adam Snyder is the worst lineman we have; Heitmann is solid, but nothing more; Baas is weak in pass protection but good in run protection; and Rachal has been pretty bad too.

I'm using ProFootballFocus.com as my source since I like how they break down each player. Their goal is to rank every single player on every single play and then score them based on how they did. If they didn't do their job right (missed block, dropped catch, blown route) they receive a negative grade. If their play didn't impact the outcome at all it's a neutral score and if they performed well on the play it's a positive. The scores range from a negative 2 all the way to positive 2. The average score is 0, so an average player's score will always be 0. For the game score a player's individual play scores are added up giving them a final number. Their season rankings are done the same way--add up each game score to come up with a final answer.

Yes it is subjective, but if your entire group is using the same criteria in their subjectiveness then you're ok because your only comparing them to each other. I think the goal of PFF can be summed up from this line from their "Grading" page.

Statistics in their raw form are always considered objective but in my opinion, with the small number of games played, very often unintelligent.

"I tend to agree, with a few caveats, and I like that they're trying to bring some intelligence to the equation. If a QB throws 3 interceptions in a game but one came from a dropped pass, another from a WR running a poor route and a third on a Hail Mary at the end of the half, it skews his stats by far too great an amount to be useful."

After the jump let's look at their rankings for the tackle spot (they don't differentiate between LT or RT). 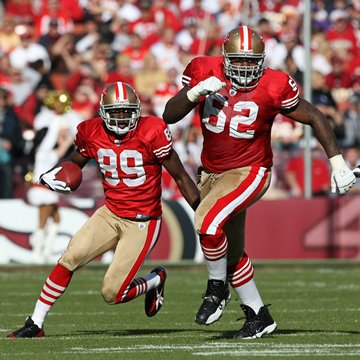 First off let's go ahead and establish who PFF regards as the best players in the NFL at their respective positions.

At tackle they have Joe Thomas, at guard Jahri Evans, and at center Nick Mangold. Now let's look and see what their game breakdowns look like. (Just a note--they don't differentiate between LT/RT or LG/RG in their rankings but if you go to the positional rankings they list the number of games where a player started at each position which makes it possible for the user to calculate rankings for left vs right). 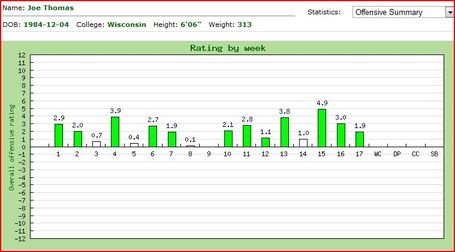 As you can see Thomas had very few poor games. Looks like he had a bad game against Buffalo and a bad one against GB, but he only gave up 3 QB sacks, 5 QB hits, and 7 QB pressures. One of the best pass blockers and a very fine run blocker as well. 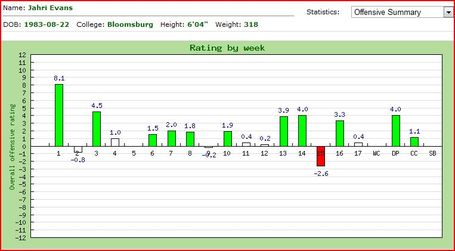 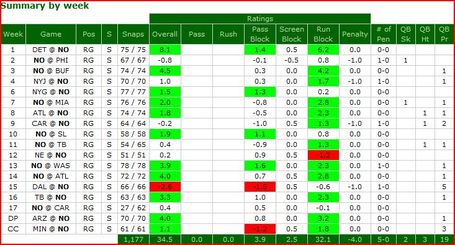 Based on the charts it appears that Evans is average or slightly above average in pass blocking but exceptional in run blocking. Looking at game film that seems about right to me. Evans has only given up 2 sacks, 3 QB hits, but has allowed 14 QB pressures. 5 of those QB pressures came against Dallas which is not surprising since DeMarcus Ware lines up on that side. 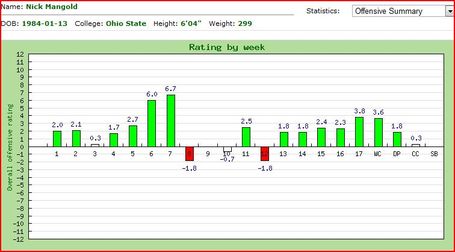 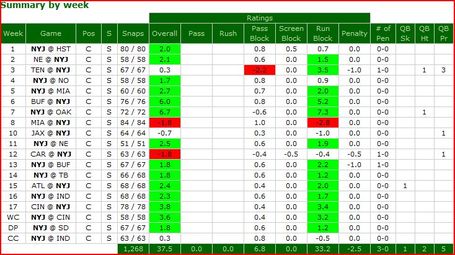 As you can see according to PFF Mangold is average, to slightly above average in pass blocking. Where he really excels is at run blocking, coming up with a whopping 33.2 points in run blocking. For some validation of this conclusion Football Outsiders ranks the Jets #6 in the league in power rushing (rushing in short yardage situations). The vast majority of the time those short-yardage situations are right up the gut, behind the center.

Now let's take a look at the 49ers line and see what conclusions, if any, we can draw from the numbers. 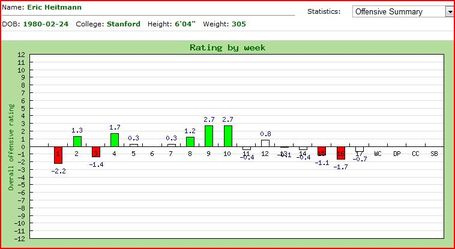 As you can see Heitmann is merely average in pass blocking, and his run blocking fluctuates week to week. He'll have really good games, then really bad games so his overall numbers for run blocking are slightly lower than those for pass blocking where he's very consistent. I agree with that conclusion. You don't see pressure coming up the middle on passes--mostly it's from the right side. However we can't get a good push up the middle on runs either, thus the poor scores there.

Heitmann is ranked 17th overall (out of 34 centers), so smack in the middle. His pass blocking rank is 14, his run blocking rank is 21. He's one of the least penalized centers in the league, tying for 7th. He gave up 2 sacks, 1 hit and 11 pressures. 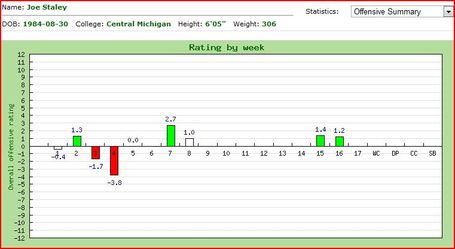 Staley's strong point is his pass blocking. His run blocking could use some help. Like every other lineman we have his run blocking improved towards the end of the season, but it went from bad to just average. Staley is ranked 26th out of all tackles by PFF, so only 6 spots higher than Sims. 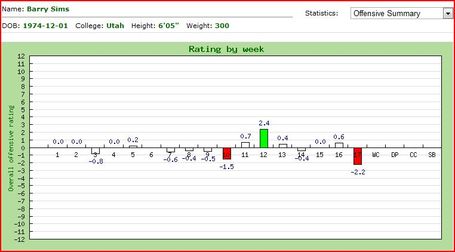 The thing that I see here is that SIms is a much better pass blocker than run blocker, but that even at run blocking he's not terrible--just average. Considering how long he's been playing that's actually pretty impressive. He's a serviceable starter and a more than capable backup. Out of 77 left tackles PFF ranks Sims 32. 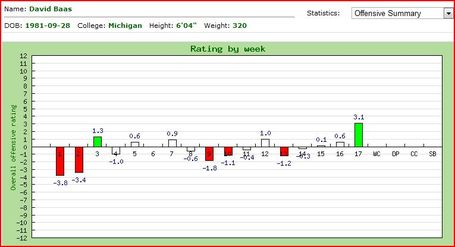 Baas is ranked 60th out 84 guards. Looking at the charts here you can see that he had two really bad games to start the year off and struggled through the middle of the season. His pass blocking is average at best, and his run blocking is not so hot either. In fact most of the year it's his run blocking that's actually suffered and brought his overall grade down. He can pull effectively but that's the only running play that worked for most of the year. We couldn't run up the middle, that's for sure. 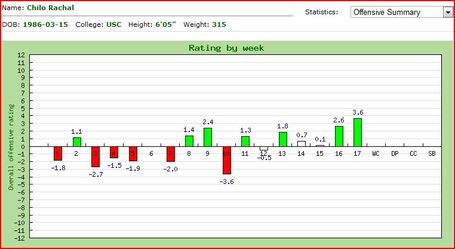 The first thing that strikes you when looking at Rachal's charts is the complete difference from about week 11 on. It's like a light bulb went on and he suddenly started understanding what was going on. No negative games, no sacks given up, just 2 QB hist and 1 QB pressure. That's incredible. His overall rank for the season is 35 (out of 84 guards), but had he played all season at the level he did the last half he'd be ranked right around 18 or so. No small feat for a 2nd year player. He's still struggling with run blocking but we have great cause for hope next season. 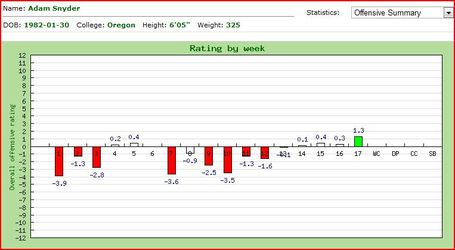 Obviously Snyder's run blocking is much better than his pass blocking. In watching the games you can see that this is true. Sadly it's the pass blocking that needs to get fixed in order for him to keep a starting job in the league. The good news is that he went from being awful to merely bad, only giving up 1 sack, 1 QB hit, and 7 QB pressures in the last three games. PFF ranks Snyder at 61 out 77 tackles, which is about right. I know I've called him the worst tackle in the league, but there are others who are worse (though most of them are LT and when they screw up it affects the game more).

1. The left side of the line didn't improve much, if any, over the course of the year. The question is why. Were they already good enough that they didn't need to improve? Were they more comfortable with each other? Is it because they're all veterans? Did the coaches focus more on Rachal and Snyder?

2. Rachal's improvement was dramatic, but even Snyder improved. Same questions--why. I think it's a combination of familiarity with each other and with the position. This is only Rachal's 2nd year, and last year Snyder was playing guard, so RT isn't really his thing either.

3. I always thought that Baas was a pretty decent run blocker but got overpowered in pass blocking. Thinking about it, it's actually a bit of the reverse. The only running play that consistently worked with him is when he pulled to the right. He did get overpowered a little but not horribly.

4. Based on the play we need a new RT and a new LG. Rachal will be a fantastic guard next year (assuming his playing continues at the level it did this year). Even with his improvement Snyder isn't anything more than an average to below-average RT. Same with Baas at the LG spot.

5. Sims really is almost as good as Staley, or at least close enough for government work. It's nice knowing that you have a backup that can step in without missing a beat.