Share All sharing options for: Statistical Review of the 2009 49ers: II. Offense

Welcome back for the second installment of my 2009 Niner stat review. If you missed Part 1, which dealt with the team's overall stats, you can read it here.

Today in Part 2, I'll be reviewing the 49ers' offensive stats, which, as you'll learn, are aptly named. Especially in comparison to the Saints and the other 11 playoff teams, this season's Niner OFF performed far below a playoff-caliber level. Obviously, some stat splits are more flattering than others, but today's post will go a long way to show that the 49ers must improve their OFF in order to contend in 2010.

For those who believe that DEF wins championships, 2009 definitely didn't provide your best year of evidence. As shown in the table, the 49ers' OFF was nearly 30% less efficient than the average playoff team and nearly 40% less efficient than this season's champs. The unfortunate thing about being that far behind the 8-ball is that this year's playoff teams (a) improved by only about 7% from 2008, and (b) started their improvement from a baseline that was approximately 20% higher than the Niners' 2009 baseline.

So a 30% improvement on OFF in 2010 seems a tad unrealistic. However, two trends suggest that the miniscule improvement under Jimmy Raye this season - which I nailed almost exactly on the number when he was hired last year - doesn't necessarily mean that the OFF is doomed to -10% OFF DVOA. First, the 4-spot jump in OFF DVOA this season was actually a lot better than the 5-spot drop that previous Raye-led OFFs have averaged during his first season as OC there, and light years ahead of the Chief's 9-spot drop in 1998.

Speaking of the late-90s Chiefs, the second trend that allays some of my fears about 2010 is the eerie similarity between their situation and that of the 2009-2010 49ers. Tell me if you think this sounds familiar:

During the 1998 season, Raye's first as Chiefs OC, the team ends up starting two different QBs over the course of the year. Also, their best OL gets injured and is out for nearly the entire season, which forces the Chiefs to shuffle the line. The team finishes a mediocre 7-9, and the OFF ends the season with a below-average DVOA of -7.0%.

After the jump, I'll finish the story by telling you how KC's offense fared in 1999...

What happened the following season? Well, the injured OL returned -creating much more stability on the line - and the QB controversy was resolved, with Elvis Grbac starting all 16 games. As a result, Raye's second season as OC resulted in a 12.5% increase in OFF DVOA and a 7-spot jump in the rankings, fueled mostly by a pass OFF that was 23.8% more efficient than it was in 1998.

Obviously, I'm not saying there's a 1-to-1 comparison here - although I'll add that the head coach of KC at the time was Gunther Cunningham, a defensive assistant promoted from within - but the similarities are obvious. Barring unforeseen circumstances, the 2010 49ers will have Joe Staley back, and will almost certainly have settled on Alex Smith as their starting QB. So, if Raye's OFF requires stability at QB and OL, as well as a TE that's the focal point of the passing game (Vernon Davis = Tony Gonzalez), then 2010 has the potential to be the same perfect storm that hit KC in 1999. To boot, I haven't even mentioned the addition of Michael Crabtree yet! In other words, if the Chiefs improved their offensive efficiency 12.5% from 1998 to 1999, then it's within the realm of possibility - although not the realm of probability - that the Niners can improve by 20% or so from 2009 to 2010.

As was the case with overall performance, the 49ers's OFF was in the top quartile of the NFL in terms of week-to-week consistency, but played better towards the end of the season: 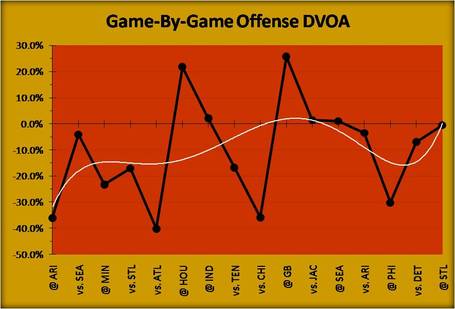 Switching to my sport psychology hat again, a second, complementary observation is that the final 2/3 of the season, in which Smith and Crabtree were starters, represents a classic example of the first two stages of learning in sport:

Unfortunately, the season seems to have ended before the third and final stage, which involves totally internalizing what you're trying to do such that you don't even think about it anymore. You don't think; you just play. And as we all know by now, Smith is notorious for requiring that third stage of learning. So, the point I'm trying to make here is that, based on the way offensive performance progressed over the course of 2009, the offseason should be absolutely huge for continued development, and the only development left is the leap from consistently average to consistently above average. Another year in Raye's system, along with the familiarity it will engender, can take Smith and the entire OFF into that automatic stage of learning. If that happens, there's no reason to believe they can't improve by 20% or so in 2010.

In Part 1, I told you that the 2009 49ers were an average road team that played below average at home. Here's a table showing some the offensive specifics:

This shouldn't be surprising to anyone. The Niners' apparent lack of a home-field advantage was entirely the OFF's fault (come back on Monday for further confirmation). To hammer the point home, the 5 teams that were worse than the 49ers in Home OFF DVOA were the Lions, Raiders, Rams, Buccaneers, and Chiefs. What was their combined record? 15-65.

Speaking of bad home OFF not being an ingredient for winning, the above table also reiterates what the analogous table in Part 1 said: Playoff teams in 2009 were characterized by good road OFF, and even better home OFF.

OFFENSIVE PERFORMANCE BY HALF

I also showed in Part 1 that the 49ers were very inefficient during the 1st halves of all games, as well as during the 2nd halves of close games. Once again, the OFF deserves all of the blame:

That's right. The Niners' OFF was literally the bottom of the NFL barrel during the 1st halves of games. It's no wonder, then, that they found themselves facing insurmountable halftime deficits numerous times during 2009. As I repeated over and over this season, the inability to score points early is a recipe for disaster. And, of course, I wasn't just pulling that out of thin air. Playoff teams jump on their opponents early with efficient OFF.

In addition to their winning-averse 1st-half stats, the OFF was also in the bottom quartile of the NFL with respect to efficiency during the 2nd halves of close games. The idea that inefficient late-and-close OFF is a death knell for winning - aside from the "late and close" part of a game immediately preceding the "we win" part of a game - is nicely illustrated by comparing the Niners to the 12 playoff teams. Whereas the playoff teams stepped up their 2nd-half OFF when a game was on the line, the Niners' OFF laid down and died in similar situations.

If there's one thing that crystallizes my point in this section, it's simply the oceans-wide difference between the Niners' OFF and that of the 2009 champs with respect to 1st Half DVOA and Late & Close DVOA.

OFFENSIVE PERFORMANCE BY DOWN

One piece of statistical research I've never really discussed on NN is FO's counterintuitive finding about the relationship between year-to-year win change and down-specific performance. Despite the fact that broadcasters and pundits love to cite 3rd-down prowess as a really important thing, it's actually a pretty poor indicator of future success because, whereas good-on-1st-and-2nd teams tend to be just as good or better overall the following season, bad-on-1st-and-2nd teams tend to be worse overall the following season. With this in mind, here's a table showing the 49ers' offensive efficiency by down:

Ah, my motives become clear. As you can see from the table, playoff teams (esp. the Saints) fit the good-on-1st-and-2nd description. Their efficiency rankings for 1st and 2nd down were higher than they were for 3rd down. In contrast, the 49ers' OFF in 2009 fit the bad-on-1st-and-2nd-down description. Therefore, despite the general optimism I've shown so far in this post, the stats above have me pulling back the reins a bit.

As yet, I've only dealt with the OFF as a whole. Obviously, pass OFF and rush OFF are not created equally, so it's useful to separate the two if we really want to identify specific areas of improvement. Therefore, the last 2 sections of this post will deal with these units separately. First, the pass OFF...

According to the table below, the Niners' Pass OFF DVOA ranking improved this past season, but their actual Pass DVOA didn't:

The first thing I'll point out is that the 49ers' improved pass OFF ranking should put to rest all of the fears people had going into 2009 vis-à-vis the replacement of Mike Martz with Jimmy Raye. Clearly, it's definitely a problem that they're still about 40% less efficient than the average playoff team, but predictions of their demise were greatly exaggerated.

Speaking of playoff teams, the second thing I'll point out is that these teams improved by about 10% over their 2008 performance, and moved up about 4 spots in the rankings. Therefore, the 40% improvement I just described seems just a bit unrealistic. Of course, that's not to say it's impossible, or even required. A 20% improvement in combination with other improvements elsewhere would likely do the trick as well.

Indeed, the Niners' rush OFF went from a nearly-bottom-8 unit in 2008 to an above-average unit in 2009. To me, this is especially impressive (and surprising) given how bad the OL was at run-blocking this past season (more on that in future episodes).

In comparison with the playoff teams of 2009, both the Niners' level and improvement of performance fit nicely with the pattern. Specifically, it bodes well for next season that the 49ers' rush OFF is capable of improving the requisite amount. I mean, we're not talking about 40% here ala the pass OFF. Also, given that the 2009 Super Bowl champions were the #1 rush OFF in the NFL, it's a good thing that the 49ers have already shown themselves to have an above-average rush OFF with Raye at the helm.

Based on the stats I've presented in Part 2 of the season review, here are the things the Niners need to do in order to seriously contend in 2010 (warning: these might sound familiar):

*DVOA statistics used to produce this article were provided by Football Outsiders.

If the 49ers' offense improves considerably in 2010, which of the following do you think will be THE MOST LIKELY REASON for the improvement?

This poll is closed