During the week I've been poking all around our little blog network here to get a look at the other blogs. I use the term 'little' a bit loosely here because SBNation currently has over 200 blogs and is growing in community every day. Not only will you find a blog for just about every team in your favorite sports here but there's also general blogs for other sports like tennis, golf, boxing and much more. I know a lot of folks here come for Niners Nation and stayed for Niners Nation but know if you're into another sport there's something for you. 200 blogs and 200 communities just like this one. So every Saturday I'll be taking a look and profiling another blog. By the way, if you can come up with a more creative title for this little segment, be my guest--cause I've got nothing.

I'm going to go ahead and start with a sport I'm getting more and more interested in: golf. Could I have picked something anymore opposite than football? Not unless there is a professional knitting league. Actually... there probably is, and I'll taking a look at the blog that would cover such a thing in the coming weeks, but for now it's going to be Waggle Room, one of the top golf blogs on the net, and with good reason. Read on past the jump to see what it's all about... 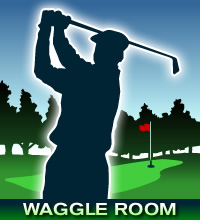 Waggle Room was established six days after our own Niners Nation came to be and quickly established itself as one of the preeminent golf blogs on the internet. Golf on the internet is much like football on the internet. They have their own beat writers, they have some that specialize in certain locations and tournaments and they have those that cover the whole scope of things. Waggle Room does a very good job providing content and being on the scene for the majority of play and news.

The editor over there, Ryan Ballengee is the only blogger thus far to get membership in the Golf Writers' Association of America, which is awesome for SBNation and certainly an admirable achievement. What does this mean for you? It means that Waggle Room and namely Ryan can deliver some of the best, professional golf-related content on the web. Ryan gets all the media privileges you'd expect for from a professional golf writer, same as everyone else in his profession. Sure, maybe ESPN has more clout than the guy but you can always expect expert coverage and content delivered on a more-than-regular basis.

Poking around the site I've come to many conclusions. The smallest of which isn't the fact that Mr. Ballengee gives some grade-A coverage. He has a good writing style, getting all the facts out there with just enough of his own personality and opinions mixed in. Another conclusion is that there's a community. Everything posted has comments on it, they have an active user-base creating fanposts and it works largely like our own Niners Nation. Another conclusion is just how much I've been missing. I mean that, I'm a golf fan, I watch it whenever I can but I had no idea that coverage extended to the point where I can find myself interested and taking part in discussion and you know what? But there's more than enough coverage over there, and the fact that so much of it exists makes me want to read and be a part of it. Just something to think about.

If you're at all interested in golf, or if you're a die-hard golf nut, Waggle Room is the place to be on the net for coverage, commentary and community. I haven't got the chance to speak with Ryan yet but he seems a cool guy with a passion for the sport, and if you share a similar passion I suggest getting your coverage from him. They have posts up before and after everything relating to professional golf and its tournaments. If a golfer is in the news, you can read about it on Waggle Room. Ryan's in with PGA and the LPGA enables him to provide exclusive, personalized content that is always a good read.

Oh and one last thing: the headline over at Waggle Room reads "Because Golf has No Offseason". That's right, no offseason, strictly speaking. It wouldn't hurt to expand your sporting horizons, it is, after all, competition and that's what it really all comes down to. I won't get into how it's played, I think we all understand that to the extent required and if not--well head over to Waggle Room! Check it out guys, joining the blog is easy as can be and should be staring you in the face once you head over. Come on back next Saturday for a look at another blog, enjoy your lunch (and maybe your golf!).