"You will pry this from my cold, dead hands.."

Share All sharing options for: "You will pry this from my cold, dead hands.."

Even during a recession, sports swag is still big business. Drew Brees and Brett Favre are battling it out for the top spot at NFLShop.com in jersey sales (and my guess is that post Super Bowl, Brees will become the eventual winner), and Kobe Bryant tops the list on NBA jersey sales at the beginning of 2010.  Well, Kobe leads it until fans make a run at Lebron James’ Cleveland Cavalier jersey after he leaves for New York and the Knicks, who James will sell even more jerseys after he does (disclaimer: the previous sentence is purely tongue-in-cheek folks. I don’t want readers of the Cavs blog hatin’ on Niners Nation because of it). San Francisco Giants fans were clutching onto their Tim Lincecum jersey for dear life until yesterday. It isn’t limited to sportswear either. If you or a relative are avid golfers, you may have Gold lying somewhere due to a PGA loophole that could have Tiger Woods sexting your iPhone. By the way, anybody in the market for a used, oversized driver? I have about 10 of those collecting dust in the garage.

This article is meant is for the fan’s most prized sports swag, be it either a jersey, picture, football, etc. Basically anything you value that you will be buried with, despite the significant other’s dismay and embarrassment. You can post a pic, or a link to a pic to show it off. You can use a host like Tinypic for uploading the image, and if you post the image, try to keep it sized accordingly, for we don’t really need to see the detail of nacho stains or the aftermath of a seagull attack after a game at the ‘Stick. If you don’t know how to post the pic, just post the link. Post a bit of history and reason why it is so prized too. Please keep it to one or two pics as well. I’ll go first. I’m posting more than one or two, but bear in mind, it’s for the article’s purpose: 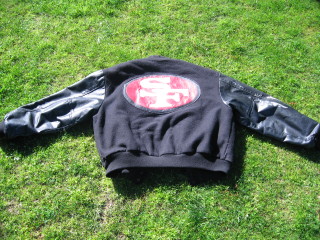 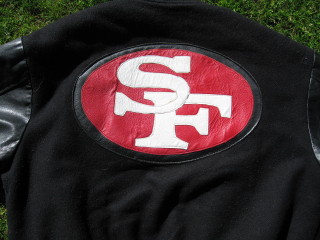 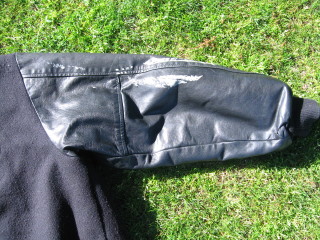 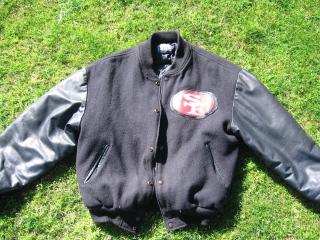 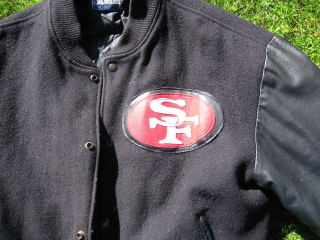 Above are a few pictures of the only piece of 49er swag I own to date. I bought it at a thrift store in the Haight-Ashbury District (Upper) on the way to play drums with the famous drum circle at "Hippy Hill" (better known as Sharon Meadow) right by John St. Clair field (formerly known as Kezar Field). Anybody that lives or has lived in San Francisco knows about it’s micro-climates (right Fooch?), and where I was once warm in Noe Valley now turned very cold once I got off of the bus in the Upper Haight. I went into the thrift store looking for a cheap jacket to buy, and lo and behold, here was this jacket on the rack.

The cool thing about finding it in an Upper Haight thrift store is that anybody that shops at an Upper Haight thrift store probably won’t buy this jacket, thus, I scored it for $20 bucks. It looks homemade, and props to the original owner for making it if it was. The stain on the sleeve came from leaning against a wall in a flat in SF that was just painted. I haven’t had this jacket cleaned in years, and the smells of my all of my years since buying it are embedded as history. I wear it proudly in So-Cal as a giant "F-YOU!!" to all of the So-Cal fans who have pristine Tony Romo jersey’s along with their Charger\Cardinal\1999 Rams\Raider and now Saints jerseys in their closets. I’ve had people want to buy it from me as well for way more than I purchased it, but they will have to pry it "from my cold, dead hands" before I ever part with it.