Share All sharing options for: Statistical Review of the 2009 49ers: III. Defense

Welcome back for Part 3 of my 2009 Niner stat review. If you missed Parts 1 or 2, you can read them here and here.

Today in Part 3, I'll be reviewing the 49ers' defensive stats. I think that, by the end of this post, you'll come to appreciate just how much the Niners' DEF carried the team in 2009. What that portends for 2010, though, is one of those glass-half-full-or-glass-half-empty kinds of questions. If you're an optimist, then they'll probably suggest that the 49ers are a descent OFF away from being 12-4. If you're a pessimist, then you're likely to think that 49ers are a defensive regression-to-the-mean away from being 4-12. Me? I'm a peptimist.

In 2009, only 3 teams had a more-efficient DEF than did the 49ers. Unfortunately, the Jets, Packers, and Ravens all made the playoffs, whereas the Niners didn't; which means that SF had the #1 DEF in the NFL this season among non-playoff teams (Top-8 performance in bold; Bottom-8 performance in italics):

What a difference a year makes. Even without their two starting CBs for much of the season, the Niners' DEF in 2009 was nearly 20% more efficient than their 2008 incarnation. If this isn't a testament to "establishing an identity," I don't know what is. Replacing Mike Nolan's infamous 4-3/3-4 Hybrid with a standard 3-4 Hummer turned a subcompact unit into a menacing tank. Replacing Mark Roman's passivity on the back end with Dashon Goldson's aggressiveness turned a timid bend-but-don't-break DEF into a we-will-bend-and-break-you DEF. Granted, the late-season emergence of Ahmad Brooks, coupled with Aubrayo Franklin's contract-year surge at arguably the 3-4's most important position, provided specific contributions to the overall improvement.  However, a 20% improvement with essentially the same lineup tells me that having a clear identity on DEF is what got them into the Elite 8, and maintaining that identity is what will keep them there going forward.

After the jump, I'll detail the greatness that was the 2009 San Francisco DEF...

In comparison to this year's playoff teams, the story is one I'll repeat frequently in this post: Playoff teams were above-average overall, but the NFL Champion Saints, specifically, were average at best. It's a bit more nuanced than that (details to come later), but it's a general theme nevertheless. One interesting thing I'll point out about the above stats, though, is that, unlike the case with playoff OFFs in 2009, playoff DEFs didn't improve much over 2008. As you can see, this year's playoff teams only improved their DEF DVOA by an average of 2.4%, meaning that the path to postseason graduation is - by and large - through improvement on OFF, not DEF. It's true that the champs improved a lot on DEF, but that's where the aforementioned nuance comes in, so stay tuned.

Although the Niners' DEF played better towards the end of the season, the magnitude of the improvement wasn't as large as we saw previously for the OFF:

What might seem peculiar is the volatility in defensive performance from game to game, as measured by DVOA Variance. To illuminate things, here's a graph showing the DEF"s performance variation in more detail: 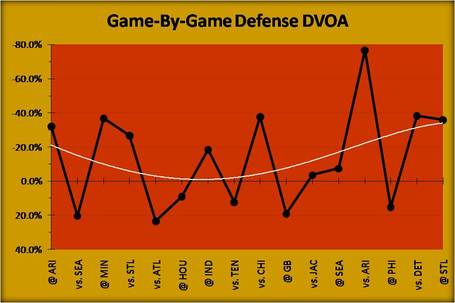 From the white trendline, you see a much smoother performance trajectory over the course of the season than you did for the OFF. There was just one slump during the season (Games 5 to 10); a slump in which the DEF gradually entered and exited. So why the 7th-highest performance inconsistency in the league? Well, it's predominately because of that absurdly efficient, -76.7% performance on Monday Night Football against the Cardinals. Needless to say, it's a bit of an outlier. Take that game out, and their DEF DVOA Variance ranking would vault from 26th to 15th at 5.9%.

One other thing I'll point out is that, even if you keep the ARI game in the variance calculation, and accept a low consistency ranking, it doesn't appear to affect playoff participation anyway. Specifically, the DVOA Variance ranking for the average playoff DEF was considerably worse than their DVOA or Wtd DVOA ranking. Also, the Niners' actual Variance value was similar to that of the average playoff team.

The DEF's home/road splits further confirm that it was the OFF who lacked a home-field advantage:

Now that's a home-road split I like to see: great on the road, but even greater at home. Indeed, that's even better than the average playoff team.

Speaking of playoff teams, here's one of the places where nuance regarding the Saints' DEF emerges. As you can plainly see, they may have been an average DEF overall, but they were nearly elite at home. This Saints-specific trend is also seen generally for the average playoff team in 2009. So, the moral of the story is that playoff teams seem to have DEFs who play at elite- or borderline-elite efficiency in front of their home crowd.

DEFENSIVE PERFORMANCE BY HALF

Here is the Niners' DEF DVOA split by halves:

Finally, another bit of nuance emerges about the Saints' DEF in 2009. Although they were average overall, and below average during the 1st half, they were among the Elite 8 in efficiency when games were within a TD during the second half. In that specific situation, they were actually better than the Niners' DEF!

DEFENSIVE PERFORMANCE BY DOWN

Remember I said in Part 2 that legit OFFs are good on 1st and 2nd down; 3rd down performance is much more random for a variety of reasons.  With this in mind, here's a table showing the 49ers' defensive efficiency by down:

How about being Top-8 on all 3 downs? Is that any good? Well they were 1 of only 4 teams to accomplish that feat, with the other 3 teams (once again, NYJ, GB, BAL) making the playoffs. One interesting thing to note about this is that, of the clear-cut top 4 DEFs in 2009, 3 have strong coaching ties to the Ravens organization. Is that a coincidence? You tell me. Anyway, the whole point here is the stats suggest the Niners' DEF won't drop off considerably next season because they overperform on 3rd down.

According to the table below, the Niners' Pass DEF DVOA made a quantum leap this season:

It's actually pretty interesting that NO and SF both had essentially the same improvement over 2008. We can throw in the NYJ too because they improved from a similarly bad 12.6% Pass DEF DVOA in 2008 to the #1 ranking in 2009. Otherwise, there's not much to say here besides what I've already said about the Niners' DEF being awesome in 2009.

Once again, the Niners' D was all-around great this season. It basically doesn't require much in the way of analysis on my part:

Regarding the playoff teams, though, you'll notice that the average playoff team in 2009, as well as this year's champ, had a run DEF that declined from their 2008 performance. Add to this the facts that (a) NO's run DEF was so bad this season, and (b) the average playoff team had a worse run D than pass D, and what you end up with is the idea that run DEF isn't as important as you think it is; or at least it wasn't as important in 2009 as you think it was.

Speaking of the ST, I'll review them tomorrow...

*DVOA statistics used to produce this article were provided by Football Outsiders.