Share All sharing options for: Statistical Review of the 2009 49ers: V. Quarterbacks

Welcome back for the fifth installment of my 2009 Niner stat review. If you missed Parts 1-4, you can read them here, here, here, and here.

Today in Part 5, I'll begin looking at specific positions, starting with QBs. Although I've already spent several thousand words on Niners Nation comparing Alex Smith to Shaun Hill, there's still much to be said and new ways to say it. For example, how did Smith and Hill compare statistically to the average playoff QB in 2009? Or how about looking at their respective drive stats? Haven't done that before.

So, I hope when I'm done today, we'll be able to put this puppy to bed once and for all.

Below are the main efficiency stats for Niner QBs in 2009, alongside those of the average playoff QB and the Super Bowl champion QB. I've included the usual individual DVOA stats, as well as 3 of the 4 QB Rating components (#1-#8 performance in bold; #25-or-below performance in italics):

Where to begin? Well, one thing that stands out is that Smith was better than Hill in every category except for INT Rate, where Hill was actually the best QB in the NFL this season (!!!). Notice however that - contrary to conventional wisdom - playoff QBs ranked lower in IR Rate than in the other 3 categories; and this trend is reinforced by the pattern of rankings for Drew Brees. So, although it's nice that Hill was so INT-averse this season - a hallmark of the "game-managing" QB - it turns out that frequent completions and TDs are more important than infrequent INTs. And looking at the two Niner QBs, it's clear that Smith's efficiency stats in 2009 fit the playoff QB profile more closely than did Hill's. In fact, his TD Rate - the category in which playoff QBs ranked highest - was nearly identical to that of the average playoff QB.

After the jump, I'll continue beating the dead horse...

So, contrary to what some of you might think, Smith was the more efficient 49er QB this past season. But was he also the more productive QB in terms of yardage per pass? Well, here's the relevant table:

If you don't know what EYds and/or DYAR are, click here for an explanation...Also, remember that these are stats per pass, so comparisons are valid despite differences in playing time.

It's clear from the above table that Niner QBs were nowhere near as productive in 2009 as was the average playoff QB. To boot, given that both Smith's and Hill's DYAR/P was negative, they weren't even as productive (aka valuable) as an average backup. However, once again, Smith was more productive than Hill in 2009: each pass was a full-yard more valuable and 1.5-yards more effective given the game situation.

At this point, I think it's fair to say that Smith was the better QB according to FO's 2009 statistics. Indeed, the only thing that Hill seemed better at individually was avoiding INTs; but, hell, even Drew Brees wasn't great at that. Furthermore, despite playing in a much more free-wheeling style of OFF, Smith actually completed a higher percentage of his passes than Hill did when he was leading the Niners' 3-yards-and-a-cloud-of-dust pass OFF. In other words, Smith was more accurate despite having to make throws that were more difficult. If that isn't enough, here's a table showing Smith's and Hill's respective drive stats, some of which might surprise you (better QB in bold):

Clearly, from a production standpoint, Smith's drives were better than Hill's drives. However, what's most interesting to me, and what pretty much ends the conversation - yeah, right - is that Smith was actually better than Hill at sustaining drives. Given the conservative, run-oriented OFF exhibited when Hill was at QB, you'd expect for his drives to last longer, on average, than Smith's. Also, remember that several of Smith's games involved fast-and-furious comebacks in the 2nd half, i.e., drives in which quick scores were a priority. So, the fact that Smith's average drive lasted 5 seconds longer than Hill's is pretty astonishing, and debunks the myth that a higher-scoring OFF can't also be a ball-controlling OFF.

So, let me get this straight. Smith's more accurate. Smith's more efficient. Smith's average drive scores more points than Hill's and chews up more clock. Remind me what the argument in favor of Hill was again? Oh yeah, I forgot. He doesn't turn the ball over as much. And that's really what Smith-vs.-Hill boils down to in the end. With Smith, so much is gained, and the only price to pay is a slightly higher turnover rate, which by the way didn't seem to mean much for QBs in 2009.

But, we're not at the end just yet. If I still haven't convinced you, here's a graph showing how often each QB's drives ended with a specific result (%s for each QB add up to 100%): 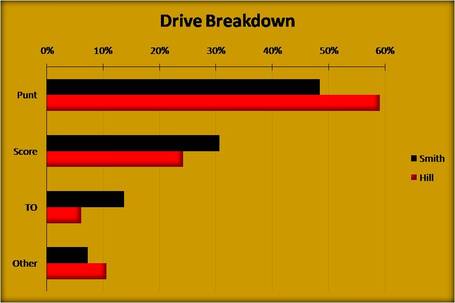 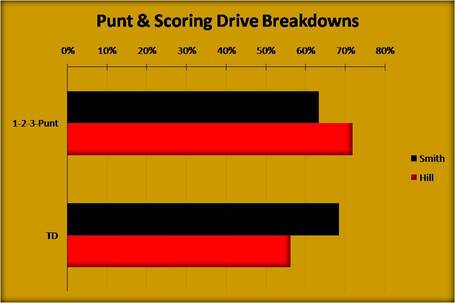 In case it's difficult to read, that first set of bars shows nearly 72% of the punts on Hill's watch constituted the "out" part of "3-and-out." Considering that nearly 60% of all Hill drives ended with a punt, this means that - cover your eyes for this - 42.4% of ALL Hill drives were 3-and-out. I don't care how many INTs the guy avoids. When I can basically flip a coin to predict whether a Hill drive is going to be 3-and-out, it's just not worth it anymore.

And finally, here's another bit of hard-hitting analysis. Not all scoring drives result in the same number of points (Duh!). So, to say that the 49ers were sacrificing scoring with Hill might be an understatement if, in addition to leading a 3-and-out-heavy OFF, he also led a FG-heavy OFF. The second set of bars in the above graph shows exactly that. Only 56.2% of Hill's scoring drives were TD drives, which means 43.8% ended in a FG. Compare this to Smith, whose scoring drives resulted in TDs nearly 70% of the time.

I think I've made a pretty rock-solid case here that the choice between Hill and Smith does not come down to one guy being better for a ball-controlling, high-percentage, conservative OFF, and the other being better for a quick-scoring, deep-passing, aggressive OFF. Rather, their respective 2009 stats show that Smith can do both. His drives ate more clock, lasted more plays, and scored more points; his passes were more accurate; and his yardage was more efficient. What else do you want from the guy? Is it really worth it to go back to Hill just so that the Niners can boast the least-intercepted starting QB in the league? I say no.

So, based on the stats I've presented in Part 5 of the season review, here are the things the Niners need to do vis-à-vis their QBs in order to seriously contend in 2010:

With a full offseason to automate the passing game alongside Vernon Davis, Michael Crabtree, and Josh Morgan, I think these improvements are probably within reach.

*DVOA, DYAR, and EYds statistics used to produce this article were provided by Football Outsiders.

This poll is closed