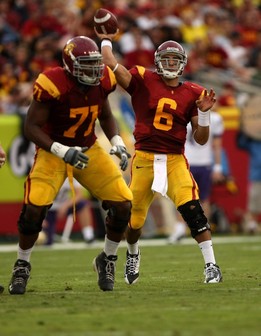 There are certain situations where players convert from one position to another because their particular skill-set suits one better than the other. Charles Brown happens to be one of those types of players. Much like Jason Smith, the former Baylor player now playing for the St. Louis Rams, Brown converted from his original position of Tight End to Offensive Tackle.

In 2005, Brown redshirted as a Freshman and played Tight End. Midway through the season, Brown was converted over to Right Tackle. 2006 Brown was switched again from Right Tackle to play the back up role at the Left Tackle position and would remain there. In that 2006 Season, Brown did get to see brief action in 4 games where he faced Arkansas, Stanford, Oregon, and UCLA. He was ready to take over in 2007 for good and would stay there until this past season in '09.

Brown has fairly decent height and long arms which is good to have at the Tackle positions. One of the main attributes he showcased this year was his ability to slide out and pick up speed rushers. He worked efficiently with the Guards to help wipe out stunts from opposing Defensive Lines. Some of the downfall with Brown has been his lack of aggressiveness at times and he does get beat more than an elite tackle should. A lot of that could be attributed to not holding enough weight as he only weighs 285 LBS. He will have a lot to learn at the next level and may need to go on a steady diet of Big Macs and Hot Fudge Sunday's for a while. If he gains too much weight, it could have an effect on his speed though, so he will need to be careful with just how much he puts on and how he puts it on. It's hard to gauge just how well Brown's game will translate in to the next level but I suspect he will be able to contribute to a teams success.

Bottom line is that Brown was good enough to snatch up the attention of the NFL to be considered a possible 1st Round to 2nd Round selection in this years draft. He should have a decent outing at this years NFL Scouting Combine due to his athleticism which could give him some leverage and may get him overdrafted possibly. To say the least, he will be an interesting player to keep and eye on next week.

Below, well take a look at some highlights from Brown this past season.

This video explains some of what I suggested above. As you can see, Brown does a good job but get's beat on occasion due to his size. The one thing I didn't mention above was his ability to run block. He gets a full head of steam and is able to force defenders back which helps his backs pick up additional yards. He does this pretty good.

All and all, Brown is a decent prospect. It's hard to say if he will begin his NFL Career as a Left Tackle or Right Tackle. Either way, there are still things that Brown needs to do. He definitely has to gain some weight. 285 LBS may have worked in the 80's but these days, and at the NFL level, he may be exposed by it. He should have a good outing at the Combine. Again, he will probably be a late 1st to mid 2nd Round pick. He is 6'6" 285 LBS.