We almost forgot to get this posted. The Super Bowl is coming up this Sunday and I'd imagine everybody will want to get their pick in ASAP.

THIS IS VERY IMPORTANT: THERE IS A TIEBREAKER IN THIS ROUND FOR THE FREE-FOR-ALL - SO IF YOU THINK THAT YOU HAVE ANY CHANCE TO PLACE IN THE TOP THREE, BE SURE TO PLAY THE TIEBREAKER. THE TIEBREAKER IS SIMPLE: PREDICT THE TOTAL NET YARDS FOR THE GAME.

For those unaware, our matchup for Super Bowl XLIV is:

After the jump I've posted the updated bracket and all the necessary rules. Good luck to YoungWillis and cassusriff in our championship, as well as all of us in the battle of the free-for-all. 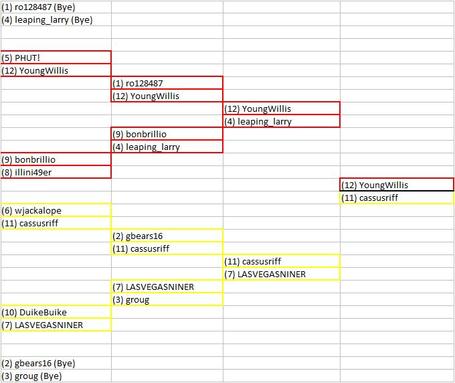 Up until now, folks have just posted their scores in any particular fashion, although howtheyscored has made requests for a specific format. Given the amount of time and effort howtheyscored has to put into determining the final results, I am implementing a requirement for how to format your scores (based on the spreadsheet howtheyscored has created). If you fail to follow this format, any incorrectly formatted scores for the week will be disqualified. The format is "Team A @ Team B: A score - B score." That basically is visitor @ home: visitor score - home score." Here's an example of how to do it:

If you think New Orleans will win 24-14, it needs to appear as this:

If you'd like you can bold the winner (New Orleans @ Indianapolis: 14 - 24), but that is not required (although probably a good backup in case you reversed the score by accident.

If you make a mistake in the formatting I'll reply to your score reminding you to correct it. To correct it, simply reply to your picks and post them in the correct format. Do not post your scores again at the bottom of the thread. I'll make sure and include these directions each week so people do not forgot and lose out on points. As I mentioned above, we're doing this to make howtheyscored's life easier in figuring out the scores. The # of regular commenters has increased dramatically since last season, so we're anticipating a greater # of prediction contest participants. While this is a new rule, I don't think it's all that difficult for folks to follow it.