Where Are They Now Part 2: The skill positions.

Share All sharing options for: Where Are They Now Part 2: The skill positions.

Now that we've hit the off-season things will be a bit slower. I started this series way back in October, and then got busy doing other articles. I'll be returning to these and doing one a week throughout the off-season. I'll first be concentrating on the All-Niner team as voted on by the readers of Niners Nation. Once I'm done with that I'll move on to some of the more famous teams/players from the early days of the Niners. If you have any requests please let me know and I'll trade to include them.

The first part of the series was on the QBs and can be found here:

Where Are They Now Part One: The QBs

This article will deal with the running back, full back, and tight end.

Next week's installment will deal with the offensive line.

Craig was drafted in the second round of the 1983 draft, and he immediately had an impact n the team. That first year he had a total of 12 touchdowns. In Super Bowl XIX he rushed for 58 yards, caught seven passes for 77 yards and became the first player ever to score three touchdowns. The next season he became the first player ever to have 1,000 yards rushing and 1,000 yards receiving in the same season. Unusually enough Craig played in a playoff game in every single year of his career. He had the really distinctive high stepping run that was so effective at eluding tackles.

Since leaving the Niners, Craig has done a number of things. Professionally he gives inspirational speeches (through TSE Sports & Entertainment). He promotes a protein mix, and has recently joined Valentine Asset Capital (I'm assuming for his name recognition as I can't find any indication that he's got any kind of economic or investment experience).

Roger Craig has written a book (with the help of Matt Maiocco) "Roger Craig's Tales from the San Francisco 49ers Sideline", which you can buy from Amazon. It's a collection of stories from the glory years.

His kids are just as involved in athletics as he is. His oldest daughter Damesha was a sprinter for UCLA. The next oldest Rometra played guard for USC, and his son Rodgrick plays basketball for Texas Tech.

He remains a candidate for the Hall of Fame, and while he didn't make it this year, he was a semifinalist for the second team.

During his spare time he studies tae kwon do and runs marathons. He actually started his long distance running while playing for the Niners. He's a regular competitor in the San Jose Half Marathon. Last year he did the half-marathon in a pretty good 1:44:43, which was good enough to put him in 1121 out of 9672 racers. 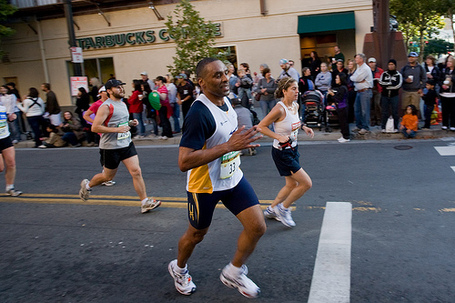 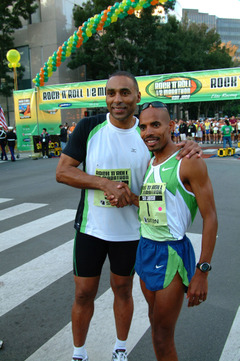 Runners World interviews Craig about what got him into long distance running.

Another nice article about Roger Craig and running

Interview with Tom Osborne. At the very bottom of the page is a nice tidbit about recruiting Roger Craig

In my mind Rathman epitomizes what a fullback should be. He had great hands, as well as the ability to deliver a punishing block. Like Roger Craig he came out of the University of Nebraska. The 49ers drafted him in the 2nd round in 1986. He played with the 49ers for seven years before heading to the Raiders for one year and then calling it good in 1994. Fullbacks don't generally see much action but Rathman was a bit of an exception to that rule. In 1989 he led all NFL running backs with 73 receptions for 616 yards which is pretty impressive

Tom and his wife Holly have three daughters, Nicole, Alexandra, and Samantha.

Tom also does speaking tours, though I can't imagine he's very involved in that as he's got a full-time job with the Niners now. 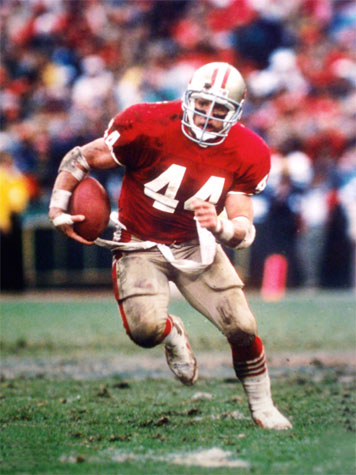 Tom Rathman interview about his philosophy on coaching.

Brent Jones
I loved Brent Jones. To me he's the proto-typical tight end. Big, burly, great blocker, but utterly reliable when the ball is thrown his way. I can remember watching Brent go over the middle countless times to get the ball. He was drafted by the Steelers in 1986 and then traded to the Niners a year later. He spent the rest of his career with us. He's one of the few tight ends in the league to get over 400 catches (417) for a total of 5,195 yards and 33 touchdowns.

Upon retiring in 1997 he joined the crew of The NFL Today. He left them in 2004 to work full-time on his investment business Northgate Capital. He's on the board of directors for San Jose Sports & Entertainment Enterprises, which owns the San Jose Sharks. He's a big fantasy football fan (was even interviewed by Michael Fabiano for NFL.com a couple of years ago).

He's done a little bit of high school coaching for the Monte Vista High school in Danville CA (where he currently lives). His girls play soccer so he follows them around (his daughter Courtney plays for the University of North Carolina).

Interview from the Danville Weekly. 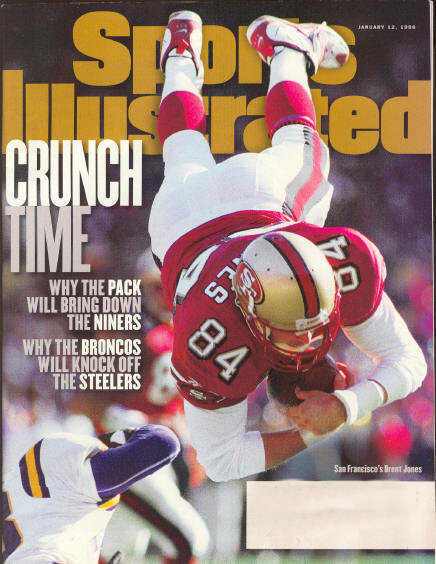 1994 playoff opener vs Chicago. Brent Jones was the first person there after the late hit on Young. (Also look at the second person there).