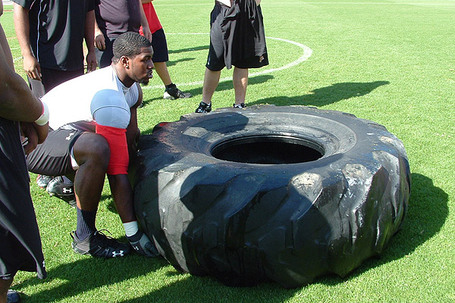 Bruce Campbell could very well be the most athletic Offensive Tackle entering the NFL this year. There have been some concerns regarding injury, but the Maryland Tackle should be as healthy as an ox and as strong as one as a rookie as well. Campbell has been considered in most Mock Drafts up to this point to be a 1st Round pick.

When asked about what he would bring to the table as an NFL Player, Campbell had this to say,

"I feel I can be something special and this is best for me. I have good size and I can protect the quarterbacks' blind side. I played defensive line in high school so I can also think like a defensive player, which is an advantage."

This to me sounds like a young man who has a lot of confidence and faith in himself. Confidence is a very important virtue to possess at the next level coming in as a rookie. Campbell should be able to step in an make an immediate impact whether it be at Right Tackle or Left Tackle. Like former Terp, Vernon Davis, Campbell is a gym rat. He works out religiously and likes to keep himself in tip-top shape.

Below, Well look at some of Campbell's accomplishments while at Maryland...

This video showcases just how dominant this Left Tackle can be. Campbell in this feed demonstrates good speed and even better strength. He holds his blocks extremely well and understands what defensive ends are trying to do against him. His strength is in pass blocking, but he is effective in run blocking also.

With everything that Campbell has demonstrated throughout his collegiate career, he has more than likely locked up a 1st Round selection for himself. There is always a chance that a certain player can fall, but if Campbell does in fact fall, he won't slip past the beginning portion of the 2nd Round. I believe that Campbell will be selected within the 1st half of the 1st Round.