Today I wanted to talk about one of my favorite subjects, offensive line play. A brief history of where I come from on this. I attended a small high school in Idaho (graduating class of 125). I played both ways on the football team. Offensively I played RG (nothing more fun than pulling on a sweep and knocking a LB off his feet), and defensively I played RT. We ran a 4-3 on defense.

No, that's not a spud cellar--it's my high school.

Offensively we used a traditional blocking scheme which assigned a particular player to each offensive linemen. If you did a trap block you were still responsible for a specific assignment and you were coached to hit the guy and keep driving. If someone went by you they were someone else's assignment.

When running a zone blocking scheme there are a couple of things that you have to determine. The first is where the blocking will be taken place. Is it an Inside Zone (between the offensive tackles), Outside Zone (just outside the tackles), or a stretch play (inside the last offensive player)?

Once you've determined that the next step is to determine whether you're covered or uncovered. This is the most important part of zone blocking. Let me illustrate

Here we have a 3-4 defense (yes, I realize that the DE are split a bit further out than is normal but this is useful for illustrating the technique of zone blocking) 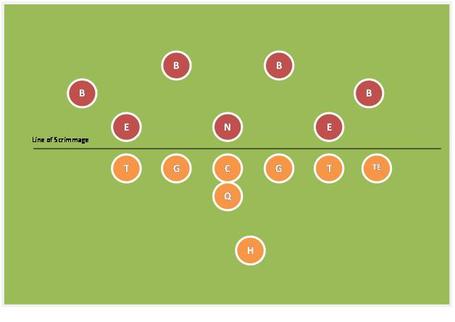 Which of the offensive linemen are "covered". Well pretty clearly we've got the LT, Center and RT covered, with the LG, RG and TE "uncovered".  Now that we've determined what's our position is we make our moves. The ball is snapped and the LT makes his first move. It's not a block straight ahead like you would assume (which is traditional in offensive line blocking). Rather it's a step left and then ahead. The purpose of this is to gain leverage and get a double-team help from the LG. 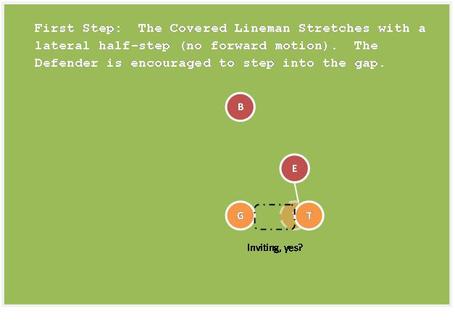 Suddenly the DE sees this gap and says to himself "I've got this play made". Naturally he steps into it, but what he doesn't know is that he's stepped into a trap. 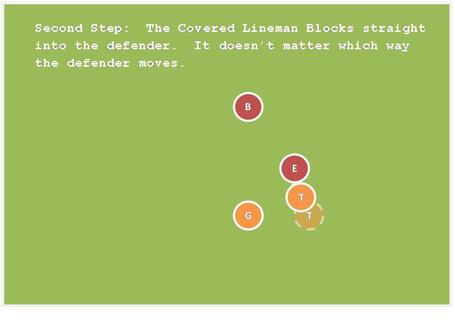 The DE takes the bait and steps into the hole that's been left open. The LT then takes him on at an angle and thus has the leverage to drive him away from the play.

The guard hasn't been sitting on his hands this entire time. He takes a step to the right and up to take on the other shoulder of the DE. Suddenly the DE finds himself with two offensive linemen containing him and driving him away from the play.

Now you may have noticed that there's no blocking assignment here for the LB. Be patient and all will be revealed. The Guard (i.e. assisting lineman) ignores the LB as long as possible. Even though his hands are on the chest/shoulder of the DE he's always got the LB in his eyes (same with the tackle). They're waiting for the LB to make a move. 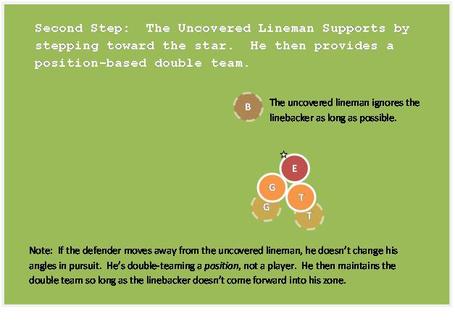 If the LB moves to inside of the DE, then the Guard will move to the second level to pick him up. If he moves to the outside of the play the Tackle will move to the second level and pick him up. Either way he's covered. It doesn't matter if it's a LB there, or if the LB drops into coverage and a safety comes up. What matters is the space there and what the player decides to do.

Now let's take a look at the entire LOS. Here we have the same 3-4 with a LB crowding the LOS in anticipation of a run play to that side. 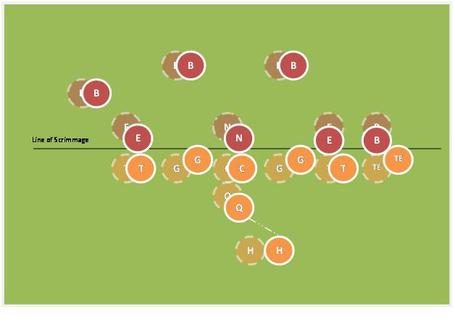 So what's the job of the running back in all of this? Well he has to be patient and wait to see what hole develops. He can't be a dance behind the LOS guy or he'll be dropped for a loss. He has to get the ball, see what's happening with the secondary guys and then head that way. This is very important because sometimes a hole will not be opened up when the RB makes his move. 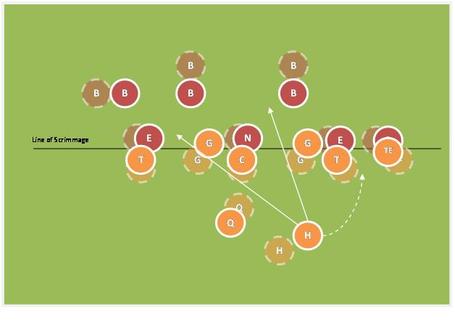 If the defenders try to shift direction and give up the momentum they've suddenly lost all their leverage and will usually find themselves on their backs.

The principle is the same for pass blocking. If you're covered you pick up your guy. If you're uncovered you slide over and help the covered man, all the while waiting to see what happens with blitzes and stunts.

Here are some real life examples. 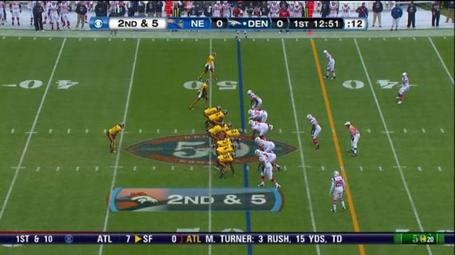 Here we have the Denver Broncos on a passing down before the snap. 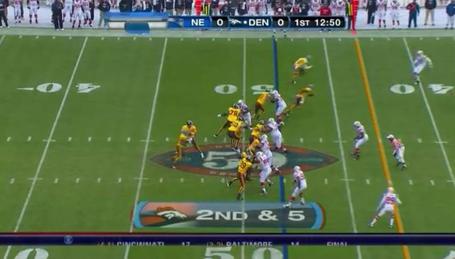 Here the ball is snapped. The LT slides a step laterally and the LG comes at an angle on the end. 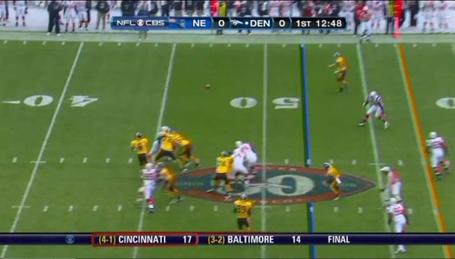 The LG is driving at the DE on the shoulder, which gives the offensive lineman all the leverage. By this point the ball is thrown and the play is over for the linemen. 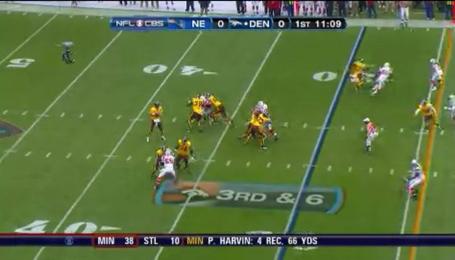 Now on to a running play

Before the snap. The Broncos are in a wildcat formation here. 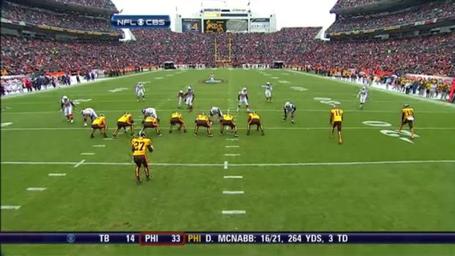 The ball is snapped. The LG pulls. The Center is covered and the RG slides over to help. The TE seals off his man and the LT waits for a defender. Result is a big run off RT. 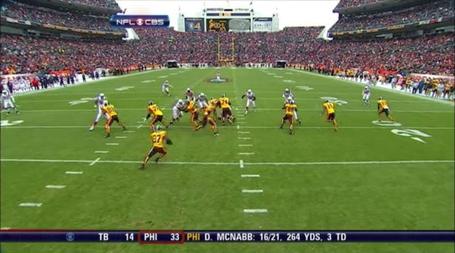 The Niners have been running a quasi-zone blocking scheme. Let me illustrate.

Here's the Monday Night game against the Cardinals. Before the snap 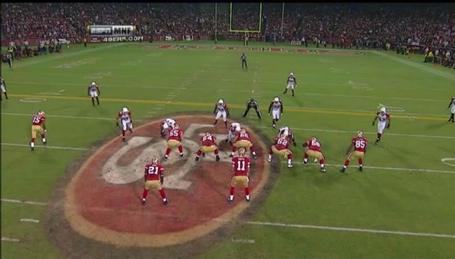 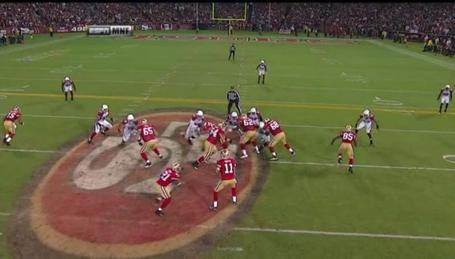 Baas pulls. Sims slides to the left. Heitmann slides a half step left and Rachal takes on the shoulder. Baas picks up the MLB and Gore gets a nice run out of it.

Here's what you want in a lineman if you're using a zone blocking scheme. You want a lineman with great footwork. He's got to be able to slidestep quickly and not get tangled up. You want a quick lineman. Size isn't as important as is quickness. If you can get big and quick, great but your guy has to be able to react fast. You also want intelligent lineman who can figure out the situation quickly.

There are some big advantages to using a zone blocking scheme. Your center doesn't have to call out blocking assignments. Watch the Broncos sometime. You'll never see the center making assignments because the linemen already know what they have to do. It's easy to get leverage and it makes it especially easy for running plays. Denver runs a zone blocking scheme almost exclusively and we know what they've been able to do with their running backs.

Here are some great resources for more information on zone blocking.

Here's a set of YouTube clips of a high school coach explaining zone blocking to his linemen. He does a great job breaking it down. He first does a demonstration on a white board and then walks the players through it. The whole series is about 45 min long.

The total series takes about 45 min to watch but is well worth your time.