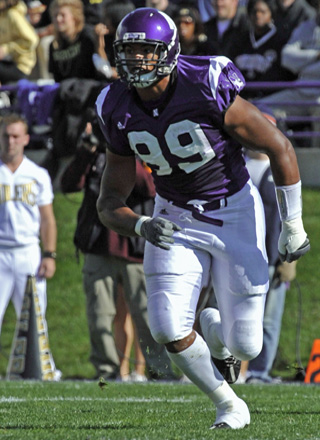 Wootton was one of a rare breed who played college football for five years. His best year was in 2008 when he racked up 10 sacks and 42 Tackles. His final year in 2009, production fell off just a bit. Wootton could be a solid player at the next level and really has some speed rushing off the edge. He's tall (6'7") and against most Offensive Tackles can get low enough to get good leverage to push them out of the way on his way to the Quarterback. Some mock drafts I have seen have had him going in the first round and others in the second. He could be one of those players that sits and watches names pass by the entire evening of the first night of the draft only to be selected on day two. If he does go day two, it won't be long before someone pulls the trigger.

Wootton had choices to go to Louisville, Connecticut, and N.C. State before chosing to go to Northwestern. The reason that the Northwestern  Defensive End played a fifth year is because he got a medical hardship his freshman season due to a neck injury. He would only play three games his freshman year before the injury but would return to play in his Sophomore year. In 2006, Wootton had a stellar season and accomplished every major defensive statistic there was to accomplish; he was the leading guy for sacks on the team, tackles for loss and was the seventh leading tackler. The final three seasons of Wooton's career he piled up 15 sacks, several tackles for loss, and always seemed to be batting down passes at the line. He also, even though playing defensive end, managed to pick the ball off 4 times. Not a bad career, not a bad career at all, which will justify the high selection.

Below, we'll look at Wootton's stats, highlights, and other accomplishments followed up with a projection of where Wootton could be selected.

This video illustrates everything that I mentioned above. He is tall, big, fast, athletic, strong, high motor, and it all shows here. He is a true 4-3 defensive end and that would be a best fit for him. He may be too big to play outside linebacker and too small to play 3-4 defensive end, so this may limit where he could be selected. Although if he adds 10 pounds or so, he could possibly be a 3-4 defensive end as well.

Wootton will be an interesting player to follow during the draft. There may be some wait time in the first round and the young man may have to wait until day two to be selected as I mentioned at the top of the article. Wootton was not a top-performer in any of the events at the combine but will have a chance to shine at Northwesterns Pro Day.