Share All sharing options for: Sunday Lunch Swing Around SBNation: Fear The Fin

With two more blogs added, SBNation sits at 245 and gets closer to 250. No, this isn't a goal they themselves have set up, but I figure it's an interesting number regardless. As always, remember that it's 250 blogs and 250 communities just like ours. Well, maybe not just like ours. Still, that doesn't mean that 250 is the number of blogs you'll likely explore, considering I doubt any of us are going to participate in, say, an Oakland Raiders blog, but for the non-team specific, I say it can never hurt to expand your horizons and take on another sport in your free time (read free time as: the six months of football offseason that make us want to go insane).

Last Sunday, I took a look at Inhistoric, a blog focused on sports history, and loved it. Before that I took a look at Bloody Elbow and Uncommon Sportsman. You'll notice this is here on Sunday, I guess the only definitive time I can say to look for these posts is at 11am on the weekends, and Fooch had me move it around (which worked out great because I was rather busy Friday) but nonetheless, it's here and I will continue.

This week I am going to look at a team-specific blog, but it's my understanding that we have a few fans of them here. Not to mention that if you're not a fan of the sport at all, maybe I can sway you. This week I'm looking at Fear The Fin, a blog covering the San Jose Sharks of the National Hockey League. Make the jump to see what I have to say about Plank n' the gang. 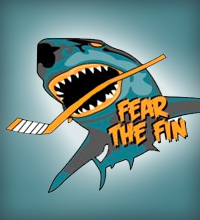 So I started actively going to Fear the Fin about the time the 49ers were eliminated from playoff contention and it's easily my second favorite SBNation blog. If you're wondering what is my favorite, please don't ask, everybody will laugh at you--I promise. That being said, let's get down to some specifics, shall we?

I'm not sure when it was started, but it's been running strong for about three-four years now and is one of the more popular places for Sharks news on the web. The main man there is Mr. Plank, and from what I understand, he's not great with answering e-mails but he nonetheless runs a pretty great site! Plank himself is a laid back guy, and from what I hear: he doesn't afraid of anything. Ok, that last part was probably lost on some of the oldies we got here (said with fondness) but nonetheless should be appreciated by Plank and his crew.

The content is great, coverage is fast and discussion is wide. If anything happens with the Sharks, you can hear about it there. Sometimes it's more on the biased side, but the news gets reported nonetheless. The main reason I stayed was for community. They're a whacky bunch, to be sure, but I can honestly say the first time I commented there I felt right at home. Not only was my wit and sarcasm accepted, it was embraced and encouraged.

They do lose sight occasionally and get off-topic, but if something should be talked about it will. There's a ton of jokers, but you won't find anyone there dissuading actual Sharks or NHL discussion. It all works with a fine balance, and it's pulled off very well.

Look, if you're a Sharks fan, you need to go there, that's final. Wherever you go now for your coverage of the team, stop it and go there. If you're interested in hockey, think about becoming a Sharks fan since you're a 49ers fan and a lot of them over there actually come here, regardless of whether or not they comment. No really, go click on some names, you'll see 49ers in more than a few of their members' profiles. That being said, if you're not really interested in hockey I hope you can give it a chance, it's an exciting sport, it's on throughout the NFL offseason, and plenty of fights break out. What more could you ask for?

One last note, there is no [site decorum] over there. It's not exactly encouraged, but keep in mind you may be in for some dirty language, especially during gameday threads, but that's not any different then those threads here, no? At any rate, the phrase "TWSS" is probably said more at Fear The Fin than any other site on the internet, and with that, I'm going to end this article and say: check it out, folks. Enjoy your lunch, I know I'm enjoying mine. (At the time of writing it's Saturday night, but I plan on gorging myself on a delightful bread bowl come posting time tomorrow.) Hope you enjoyed the read, folks!