Share All sharing options for: The Shaun Hill 49ers era comes to the End of the Road 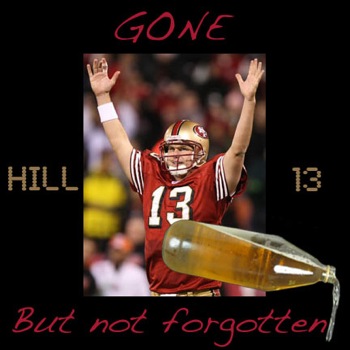 Just before lunch yesterday, word came down that the 49ers reportedly traded Shaun Hill to the Detroit Lions for a 2011 seventh round pick.  Although the trade is not finalized (awaiting Carr's signed contract), it would seem to be more or less a done deal.  Given the 49ers recent acquisition of David Carr, this trade was not exactly a shocking announcement.

We had a quick thread to get discussion going, but clearly a man of Shaun Hill's deserves a better send-off than that.  Whatever your opinion of Shaun Hill, he was involved in a fairly eventful three seasons.  He went 10-6 as a starter and created an amazing amount of debate about the QB battle he waged with Alex Smith, J.T. O'Sullivan, and others.

So, after the jump, we celebrate the brief shining star that was Shaun Hill and send him off on his way to the Motor City.  We're here to pour a 40 out for our homie as we've come to the end of the road....

The only stat that seemed to matter in the Shaun Hill era was the big W.  Even Hill's most ardent supporter realized the physical limitations.  Shaun Hill was never going to be a superstar.  The argument in support of Shaun Hill came down to the always immeasurable qualities of "leadership" and "being a winner."  Shaun Hill was the quarterback in ten 49ers wins.  While he was not going to put up monster stats, that was the stat that counted for many people.

The Shaun Hill era started rather abruptly in 2007, when Trent Dilfer went down with an injury against the Minnesota Vikings.  Hill replaced him and put up a very Shaun HIll type of line: 22/28 for 181 yards, 1 TD and 1 INT.  Nothing spectacular, but definitely solid.  The 49ers lost, but given the 49ers struggles up to that point, it was easy for people to grasp for something.  Over the next two games, Hill was 32/52 for 320 yards, 4 TDs, 1 INT, and 1 rushing touchdown, both in 49ers wins.

2008 started rather auspiciously for Hill as he was basically removed from the QB competition by Mike Martz before it really began.  Everybody remembers the "tired arm" excuse early in camp.  Just Turnovers came in and one could argue was the equivalent of Rick "Wild Thing" Vaughn before he got the glasses.  Of course, Week 8 was a turning point in that season, and might be viewed as a turning point for the franchise in the coming years.  After losing at the Giants, Mike Nolan was fired and Mike Singletary was promoted in his place.  JTO started against the Seahawks and had an abysmal first half.  Shaun Hill came out to start in the second half, and while the 49ers were battered by the Seahawks, Hill was an efficient 15/23 for 173 yards and 1 touchdown.

Hill finished out the season as starter, and the 49ers 5-3 record while he was starter helped Mike Singletary secure the permanent head coach position going forward.  I was emailing with drummer yesterday, and he made a good point about Hill.  He said Hill arguably helped both his head coaches.  He temporarily saved Mike Nolan's job at the end of 2007, and he helped Mike Singletary secure the head coach job the second half of 2008.  If Nolan lost out in 2007, one would have to imagine there was a good chance he was out the door, even with the Alex Smith injury early on.

The 49ers started off quite well for the 49ers as they raced out of the gates to 3-1.  Even in the loss, against a very good Vikings team, the 49ers were in it right to the end.  Shaun Hill wasn't wowing anybody, but he was operating as an excellent game manager.  Sure there was little upside, but he really wasn't hurting the team.  And yet, that would never be enough.  The 49ers were slaughtered by the Falcons, in a game that saw Hill go 15/38 for 198 yards and an interception.  In a half of action against the Texans Hill was 6/11 for 45 yards and the 49ers were trailing 21-0.  The second half began, and much to the surprise of many, Alex Smith was taking the snaps.

At that moment, while Hill would remain a 49er for several more months, the Shaun Hill era was effectively over in San Francisco.

If a team is going to win a Super Bowl with a game manager quarterback, the team needs some other aspect to be fairly great.  The Baltimore Ravens Super Bowl team was an example of that.  Maybe you don't need an all-time defense, but it better be really good.  And the 49ers defense is moving strongly in that direction.  However, the offense really did need some kind of kick-start.  While Alex Smith might not be the long term answer for the 49ers, he provided a kick start when it was badly needed.

In the end, Shaun Hill is what he is (don't you hate that cliche?).  He's more talented in football than I'll ever be, but in the NFL that's just not enough.  Hill's final numbers?  322/522 for 3,490 yards, 23 touchdowns, 11 interceptions, and 3 rushing touchdowns.  Certainly not bad, certainly not great.  We take it for what it is.

And while he may never be a great quarterback, I hope Hill finds immense success when he's not facing the 49ers.  My interactions with him are limited to the time I took the picture of him in the steroid-free picture.  However, in watching The Joe Show and reading as much as I can about him, Hill seems like the ideal teammate.  He's been a good soldier for the 49ers and withstood a fairly bizarre career path these last three years.  Players like that only deserve the best.

And so Shaun Hill, we pour out a 40 and wish you well in the future.  The post-jump stuff is mostly serious, while obviously we've included a bit of jest into it.  Accordingly, we close with a little early '90s Boyz II Men.  We have certainly come to the end of the road.