Where Are they Now Part 7: The DBs

Share All sharing options for: Where Are they Now Part 7: The DBs

The 1980s and 1990s were the 49er glory years. Everyone focuses on the offenses but the defenses were incredible as well. We've shown that with our reviews of the defensive linemen as well as the linebackers. Today we get to take a look at the cornerbacks and safeties.

This group includes two Hall of Famers, a couple of two-way college athletes, two first round draft picks, an amputee, and a guy who ran the 40 yard dash at a 4.74 at the combine and slipped all the way to the 5th round, as well as the original #21.

The list also includes three people listed in the 49er rap song, so as a tribute to them (and the atrociousness of 49ers rapping) I've included both the video and the lyrics.

Join me after the jump as we learn more about these players. 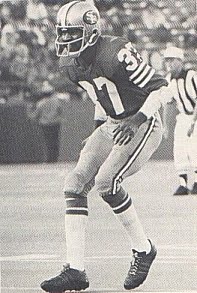 In 1961 the 49ers were blessed with three first round draft picks. With the first one they picked James Earl Johnson from UCLA, a two sport star. His rookie year he played safety, the next season he moved to WR (and had a decent year as a WR), and then moved back to safety for the remainder of his career. He would eventually move to cornerback which he played for most of his career, retiring in 1976. He was known as one of the best man-to-man cover guys during his time and regarded as one of the best CBs to never play in the Super Bowl. He was a five time Pro Bowler, being named All Pro 4 seasons in a row.

His brother Rafer Johnson is also a top-notch athlete, having won Olympic Gold in the decathlon.

He was elected to the Hall of Fame in 1994. His jersey is one of the few 49er jersey numbers to be retired. Other than that I can't find anything on him--it's like he dropped off the face of the earth after football.

They Shall Not Pass written in 1970 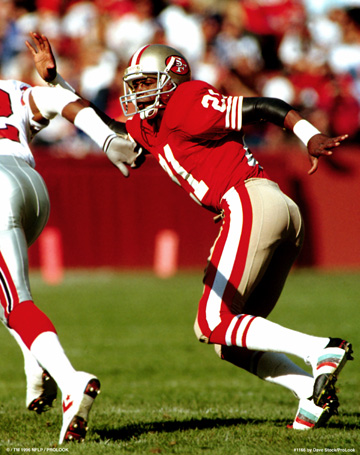 Wright was selected in the 2nd round of the 1981 draft. This was the same year that saw Ronnie Lott being drafted in the first round. He played 10 years in the NFL, all for the 49ers, and retired in 1990. The 49ers defense was ranked 27th in 1980 and in 1981 it was ranked 7th overall thanks in large part to the efforts of Eric Wright and Ronnie Lott.  Wright is just one of five players to play on all four Super Bowl teams. He had groin problems towards the end of his career which limited him somewhat and probably prevented him from being a Hall of Famer.

Shawntae Spencer used Wright as inspiration to improve his game this year. "This offseason, I studied older film (of) Eric Wright," Spencer said. "We talk a lot. He's helped me on a lot of things. Watching his career, being a big corner, he was outstanding. At the time, he was the best cornerback in the NFL. If he hadn't gotten injured, he would have been the best cornerback in the history of the NFL. The film supports it."

Wright joined the team in the 1991 training camp as a DB assistant and took on Merton Hanks as a special project molding him from a fifth round draft choice to an immediate starter.

In 1994 Wright was hired as Missouri's wide receivers coach. He is now one of the 49ers alumni coordinators.

In 2009 NFL listed Ronnie Lott and Eric Wright as the No 3 cornerback tandem in history.

1981 was the draft where Walsh really took control and started turning the organization around. He focused on defense since the 49ers defense in 1980 was simply atrocious. Lott was a first round selection and made an immediate impact his rookie season. He and Eric Wright made one of the most fearsome defensive secondaries in the league. Lott started his career at left cornerback (Wright was the right cornerback), but in 1985 he switched to safety. After the 1985 season he had the tip of his left pinky finger amputated after it was crushed when he was tackling running back Timmy Newsome.

Lott retired in 1995. In 2000 he was elected to the Hall of Fame on his first ballot. He was also selected as a member of the NFL's 75th anniversary team

In 1989 Lott founded the All-Stars Helping Kids foundation. It's essentially a charitable equity firm. They collect donations from athletes and other organizations and then give grants to other worthy organizations.

By leveraging the power of sports and the commitment of individuals and businesses, All Stars is proving that we can impact more kids if we join forces. Collectively, we are leveling the playing field to give disadvantaged children in low-income communities a greater opportunity to realize their true potential.

He lives in Cupertino California with his wife Karen and his children Hailey, Isaiah, and Chloe. He manages a $2.4 billion private equity firm as well as owning a Toyota dealership and a Mercedes Benz dealership. 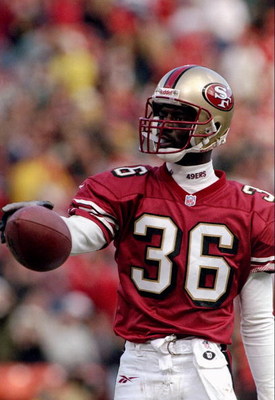 Merton Hanks is one of my favorite 49ers of all time. I can remember his incredibly long neck as well as the Funky Chicken dance he was famous for. Hanks had some of the best teachers in his career, being mentored by the likes of Eric Wright. He earned all-Big 12 honors at Iowa but a slow 40 time (4.74) in the combine dropped him all the way to the 5th round of the 1991 draft where the 49ers grabbed him. He was a steal, becoming a great safety in the league and was an instrumental part of the 1994 Super Bowl team. Hanks was named to four Pro-Bowl teams in a row. He finished his career with the Seattle Seahawks.

Jerry Rice gave him the ultimate compliment, comparing him to Ronnie Lott

Rice, who should know, unequivocally tabs Hanks as the league's best safety and bristles at the notion that the lanky Hanks is not a hard hitter. "That's bogus," Rice says. "He's like a smaller Ronnie Lott. He doesn't mind sticking his head in there."

"It came from watching Bert and Ernie on Sesame Street with my daughters," Hanks said. "We were playing around with it and then one day it made its way to the practice field, then it popped up on game day. That's the long and short of it."

Merton Hanks' daughter Milan has autism and he spends much of his free time doing charitable work for autism foundations as well as speaking about it.

Sports Illustrated shot of his family in 1995 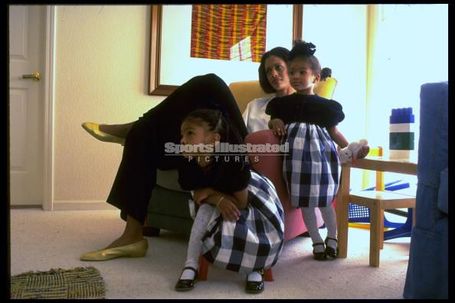 He currently works for the NFL as director of football operations (don't ask me what his responsibilities are because I can't find 'em anywhere).