Share All sharing options for: Football University: The 3-4 Defense

The history of the 3-4 defense is a little fuzzy, at least in regards to it's use in the pros. It's generally accepted that it was developed at Oklahoma and that Chuck Fairbanks brought it with him to the Patriots from his head coaching gig at Oklahoma. However Bill Arnsparger used it with the Dolphins in 1971 and 1972 before Fairbanks came along, but it wasn't a regular part of their rotation. Hank Stram also flirted briefly with the 3-4 nearly 40 years ago but didn't really stick with it. Perhaps the man who was most influential in bringing the 3-4 to the pros was Joe Collier who spent 20 seasons with the Denver Broncos from 1969 to 1988 and introduced the 3-4 there. Over the years the 3-4 has waxed and waned in popularity.

In 2004 only five teams used the 3-4 defense. Those were the Patriots, Steelers, Texans, Ravens and Chargers. In 2009 there were thirteen. (The Cardinals, Ravens, Browns, Cowboys, Broncos, Packers, Chiefs, Dolphins, Patriots, Jets, Steelers, Chargers, and Niners all ran a 3-4). Next year both the Bills and the Redskins will be switching to a 3-4 as well, bringing the total # of 3-4 teams to 15.

Four of the top five overall defenses in 2009 were 3-4 defenses. Three of the top five sack leaders were 3-4 teams. Although neither Super Bowl team ran a 3-4, seven of the twelve play off teams ran a 3-4. Since 2000 the New England Patriots and the Steelers have won five Super Bowls between the two teams, and both run a 3-4.

It would not surprise me at all to see 20 or more teams running a 3-4 by 2015 (or even sooner). There are a couple of reasons why the 3-4 is gaining in popularity. The first is that it's really hard to find quality DE in the draft--guys that can consistently get pressure on an opposing QB. By going to a 3-4 you can reduce (but then you need to find a monster of DT to be your nose tackle). The second (and more important in my mind) is that the 3-4 allows defensive coordinators to be much more creative in their schemes and make it that much harder for opposing offenses to counteract.

Despite the many teams using it in the pros there are only about a dozen Division I college teams that use the 3-4. I would expect that number to increase dramatically over the next several years since college football tends to follow the same trends as the pros.

Join me after the jump as we get into some specifics regarding the 3-4.

At it's heart the 3-4 defense is pretty simple. You have three defensive linemen, four linebackers, two cornerbacks, and two safeties.

The requirements for players in a 3-4 are different than for players in a 4-3, and it all starts with the nose tackle. Joe Collier spent 20 seasons with the Denver Broncos and was the one who brought the 3-4 to Denver. Bill Belicheck has credited Collier with teaching him the 3-4 originally. This is what Collier has to say about the 3-4.

"You build it from the inside out," Collier said. "The nose tackle and the inside linebackers, those are three guys that are very important. But when you go through it, the nose tackle is probably the single-most important guy."

What do you want from your nose tackle?

Just like an offensive line can make a QB look pretty good the nose tackle can make your ILB look pretty good. Patrick Willis owes at least part of his success to the outstanding job that Franklin has done up front since we switched to the 3-4.

Your nose tackle needs to be a massive guy. Generally you want him around 6'0 or 6'1 and around 330lbs or so (the average size of the starting NT in the NFL in 2009 was 328 lbs), though nose tackles do come smaller (Jay Ratliff at 303 lbs) and much bigger (Kris Jenkins at 360lbs). His job is to tie up both the center and the two guards, preventing them from reaching the LB. If he does this, he's done his job. If he can collapse the pocket as well, even better since this means that the blitzing LB has a clear shot at the QB. 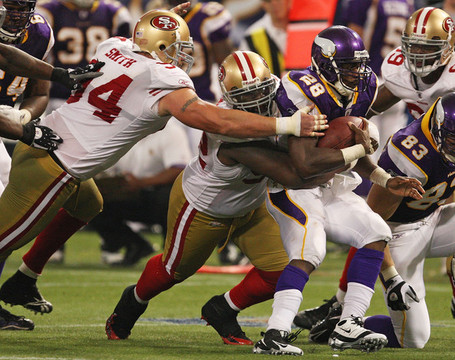 The DE in a 3-4 have similar jobs as the nose tackle. They are there to provide some pass rush, but mostly to tie up offensive linemen and force runs to bounce outside where the linebackers can make plays. In a 3-4 team your linemen won't generally have big stats--the fact that Justin Smith does is a testament to his ability as a player. The pass rush comes from the OLB in a 3-4 based defense.

Your outside linebackers in a 3-4 were generally college defensive ends who are too small to play that position in the pros. You want them to be around 240-260 lbs. They have specific responsibilities as well. The weak side LB (the weak side of the line is the one opposite of the tight end) is the speed rusher. You'll sometimes see our OLB switching spots on the field based on the offensive alignment and this is why.

He's the rusher, he's the speed guy. Has to be good enough in the rush to beat tackles one-on-one enough to make plays and always beat any backs who try to block him."

The strong side linebacker has a different job. He needs to be able to be strong enough to take on a blocker as well as quick enough to drop back into coverage.

"This is a tough position to play, because he has to be quick enough to help you in the rush and drop out and cover that tight end or back a lot. But he's also got to be strong enough to get in there against the run, because most teams are going to be dominant to the strong side in the run game."

Finally your inside linebackers need to be quick enough to get side to side in a hurry, though if the front linemen are doing their job it's an easier transition for them.

Very few teams run a 3-4 all the time, because it's difficult to get pressure on the QB in a passing situation (in fact that's one of the major weaknesses of a 3-4). To rectify this problem Dick LeBeau invented the zone blitz. Basically you have your three down linemen rushing the QB, and then one of your outside linebackers also rushes the QB. The rest of the linebackers fill the gaps in the secondary with help from the safeties and do so in zone coverage, rather than man to man. The cornerbacks will still generally play man coverage. On almost every play at least one of the linebackers is rushing the quarterback, sometimes two or three.

This is the defense that the 49ers mostly play, except on passing downs when we pull out the nose tackle and have two defensive ends and two linebackers. A big disadvantage of this scheme is that it leaves you vulnerable across the middle to seam routes from tight ends (Owen Daniels anyone?) as well a vulnerable to the screen since one of your OLB is caught up in rushing the passer.

The benefits to the 3-4 are immense. With a 4-3 (four down linemen), your defensive packages are pretty static. There's not much that you can do to be creative. With a 3-4 the variations are endless. Allow me to demonstrate.

Basic 3-4 alignment from the MNF game. In this sample the two OLB are up a bit closer to the line of scrimmage than is normal for most 3-4s, but it's what we do. 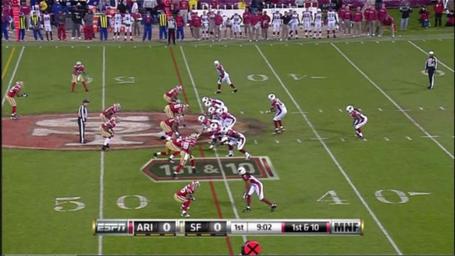 You can blitz both OLB, but we hardly ever do that. Mostly we blitz just one OLB though we'll have both crowd the line. 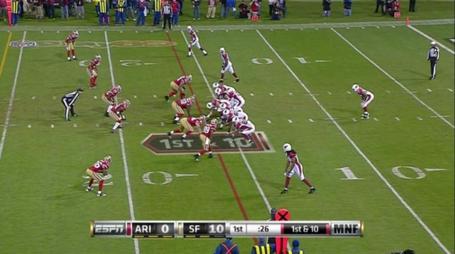 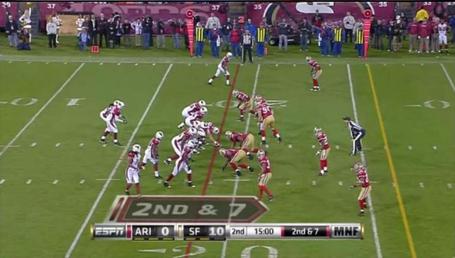 You can stunt your LB 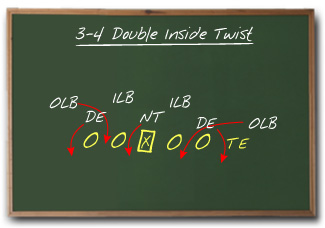 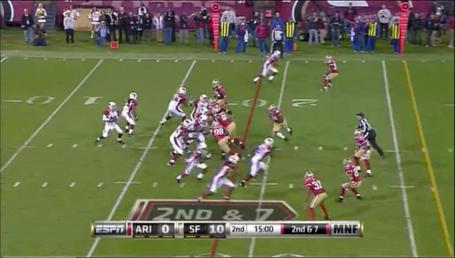 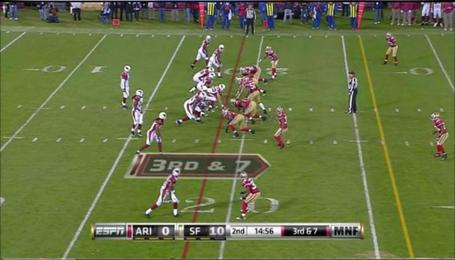 Benefit of doing that is that you overbalance the offensive line, leaving 3 linemen for 4 defenders 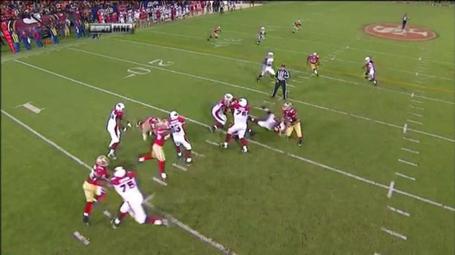 You can have everyone standing. This confuses the offensive line and opposing QBs since they have no idea who is coming or where they're coming from. 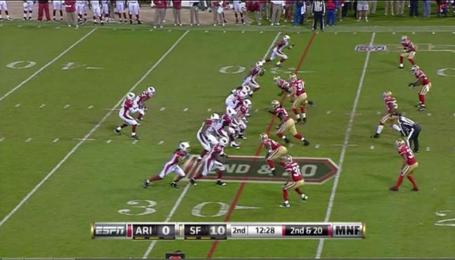 In my view the 3-4 defense allows for more creativity than does the traditional 4-3. Thankfully we have a defensive coordinator who is very creative with his defensive schemes. The standing up and moving around that you can do in a 3-4 can completely confuse and demoralize an offense (see Manning, Peyton and the Colts game), as well as provide great pressure. On that MNF game we had 4 sacks, 6 FF, and 2 INTs. Kurt Warner avoided at least three more sacks by his quick throwing--almost any other QB would've been dropped even more.