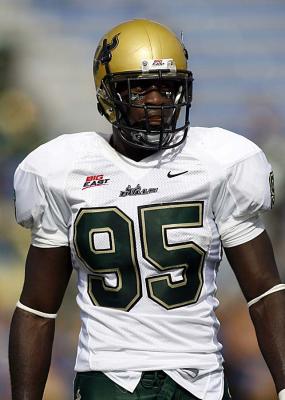 28 players left to go and just 28 more days until we sit on the edge of our seats waiting for the Roger Goodell to walk up to the podium and announce the 49ers 13th and 17th picks.

Today we'll take a look at George Selvie. Selvie was a player that was receiving very high praise entering the '09-'10 Season. In 2007, Selvie sacked the quarterback 14 times which is an average of more than one sack per game. 2008, Selvie's production fell off a bit in sacks but his tackles for loss went up. People were hoping that there would be an increase in production this year but low and behold, it fell off even further than the previous year.

Because of the fall off in production from his sophomore year, his stock has fallen down the boards considerably. He may prove to be a better fit as an outside linebacker in a 3-4 Defense where his pass rushing skills will be maximized to the fullest.

Below, we'll look at some of Selvie's accomplishments while at South Florida.

This is a very long clip that showcases alot of Selvie's flaws and attributes. Some of the feed are from 2008 and others from this past season.

Since Selvie has been sliding down the boards and did so all year long, it's going to be hard to gauge where he's selected. I believe I have only made this statement in only a handful of these articles, but it seems that there are only a handful of players that fall in to that category. Selvie saw limited action in the Senior Bowl but really didn't do much to stand out and show people he was the guy everyone saw his sophomore year when he racked up 14 Sacks. He measured at 6'3" and weighed in at 252 LBS at the combine.