Where Are They Now? The Coaches, Part 1

Share All sharing options for: Where Are They Now? The Coaches, Part 1

Now that we've finished the all-time Niner team I figured the next step would be to move on to the coaches. The Niners have actually been fairly blessed in the head coaching department. Since the formation of the team in 1945 there have only been 16 head coaches. The shortest tenure of any head coach was Fred O'Connor who took over the team mid-season of 1978 and coached the Niners to a 1-6 record. He replaced Pete McCulley who had coached the Niners to a 1-8 record

Bill Walsh owns the record for the longest tenure as Niners coach at ten seasons. Walsh owns 5 different Coach of the Year awards (Associated Press, Sporting News, UPI twice, and Pro Football Weekly), Seifert owns three (Pro Football Weekly, Sporting News twice), and Dick Nolan owns one. Of the 16 head coaches only 6 of them have winning records. The winningest coach of them all was George Seifert who won 76.6% of his games. By comparison Bill Walsh won 60.9% of his games. Two head coaches are in the Hall of Fame--Bill Walsh and Jack Christianson. Of the 16 coaches, six of them have led the Niners to the playoffs. George Seifert played in the most playoff games at 15 (he won 10), but Walsh has a slightly better record in the playoffs (10-4).

Join me after the jump as we look at the head coaches from the last decade. 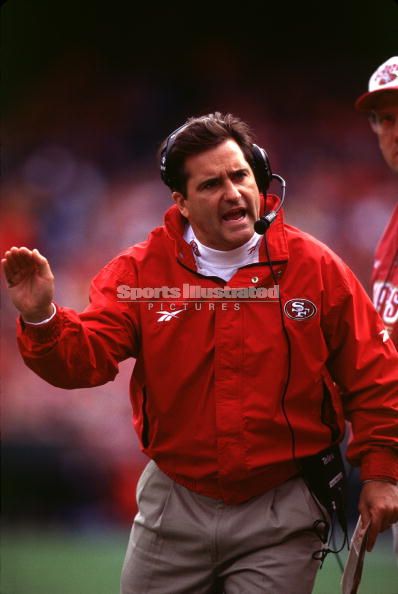 Mariucci was the winningest coach that the 49ers have had this decade, which is incredibly sad since he only coached the Niners for three seasons in this decade. He was hired as the head coach in 1997 to replace George Siefert. His first year coaching he went 13-3, winning the NCF West but losing to the Packers in the NFC Championship. He would reach the playoffs four times during his tenure and compile an overall record during the regular season of 57-39.

Mariuchi had a long, winding road to being a pro football coach. He was a standout QB at Northern Michigan University, where he led them to a Division II championship in 1975. He started out as a college coach, spending time with NMU, Cal State--Fullerton, and Louisville. In 1985 he was hired by the USFL's Orlando Renegades as a wide receiver coach. In 1986 he joined the coaching staff at USC, and then moved to Cal where he was eventually promoted to the position of offensive coordinator. In 1991 he was hired as the Green Bay Packers QB coach (where he worked extensively with Brett Favre). In 1996 he returned to Cal as the head coach. Despite finishing a dismal 6-6 as head coach he was the leading candidate for several head coaching spots, but ended up in San Francisco. 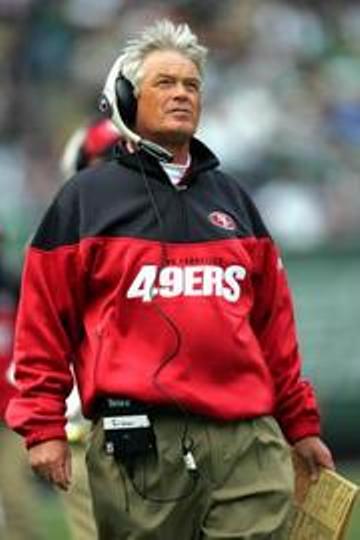 Erickson is one of those college coaches who's name seems to always be in discussion for head coaching gigs in the pros, even though his pro record isn't so hot. Erickson has never worked in the real world, having gotten his first coaching job right after graduating from Montana State. He was an assistant coach there for one year, took a high school coaching job for one year, and has spent most of the rest of his career as a college coach. He was hired to be the Seattle Seahawks' head coach in 1995. He was a medicore coach, never having a winning season. HIs overall record for the Seahawks was 31-33. He never made it to the playoffs and the highest he finished in the NFC West was 2nd.

After the unceremonious dumping of Mariucci in 2002, the Niner organization needed to find a new head coach. The list of finalists included the Jet's defensive coordinator Ted Cottrell, the Bears defensive coordinator Greg Blache and New England's defensive coordinator Romeo Crennel. Jim Mora Jr was also interviewed, but ignoring advice from Bill Walsh who was the 49ers consultant at the time, Terry Donahue went outside of the pros and interviewed several college coaches before deciding that Dennis Erickson was his man. Erickson was signed to a 5 year, $12.5 million guaranteed contract. His first season the team went 7-9. In 2004, his team went 2-14, and tied the worst record ever for the 49ers. This prompted the Yorks to fire both Terry Donahue and Erickson. Erick's record with the 49ers was 6-26. His total record as an NFL head coach is 37-59.

Sports Illustrated article from when Erickson was hired.

In 2010 he plans on running an offense at ASU similar to what was run at Texas Tech. 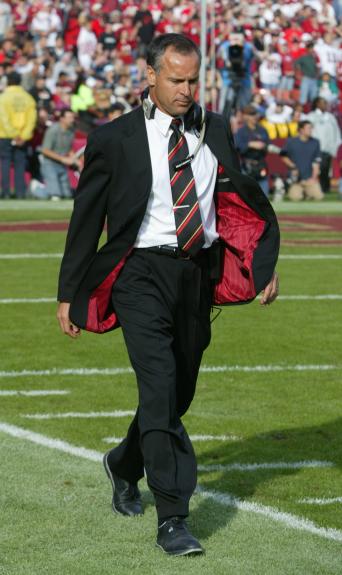 Nolan's ties to the 49ers went back to the 60s and 70s when his dad, Dick Nolan, was the head coach of the team. His father ended up with a 54-53-5 record over an 8 year time period. Unfortunately Mike would not be as successful as his father. his biggest victory would be convincing the NFL to allow him to wear suits at home games (all of which were made by Reebok as is all other NFL apparel). Hired in 2005 he was given both the job of head coach and GM. His hiring was initially viewed with favor because of his extensive defensive pedigree.

He played safety for the University of Oregon, where by all accounts, he wasn't that good--but he knew his ball, and he especially knew defense, a legacy from his father. After graduating he worked as an assistant coach for his alma mater for several years. In 1987 he was hired as a linebackers coach by Dan Reeves who was head coach of the Denver Broncos. In1993 the New York Giants hired him to be their defensive coordinator, a position he would hold until 1995. He would follow that with stints with the Washington Redskins (1997-1999) and the Jets (2000 to 2005).

His pedigree as defensive coordinator was good enough that several ex players publicly gave him their support, among them Brent Jones. In his role of GM he would pick Alex Smith #1 overall in 2005. His management style was clear from the very beginning. Three days before the 2005 draft he still hadn't told John York or Paraag Marathe who he was going to be picking with the first selection.

After a dismal 16-32 record in his first three seasons, the Yorks stripped him of his GM duties for the 2008 and 2009 seasons. Mid-way through the 2009 season he was fired and Mike Singletary was named the interim head coach.

SF Gate on the hiring of Nolan