Share All sharing options for: Pro Football Focus.com and the 49ers Secondary

A couple of weeks ago I wrote an article on ProFootballFocus.com's offensive line rankings and highlighted the 49ers. Today I wanted to talk about the much maligned secondary (which has been unfairly criticized to a great deal in my opinon). Before I do that though I wanted to update the offensive line postings. PFF did a study on pass production productivity. They wanted to see how many sacks, hits, and pressures each tackle gave up in the league, so they went through their database and came up with some answers. They also threw in a bunch of disclaimers.

This isn't to say who the best pass protecting linemen are (our gradings do a much better job of that). The PBP Rating doesn't take into account the quick throws or how long a player was tasked with protecting the quarterback. It simply looks at objective stats and adds some weight to the arguments of certain players being poor pass protectors and others excelling.

Surprisingly enough the 49ers had three offensive tackles make the listings. Two of them made it in the best pass production list and one made it to the worst production list. 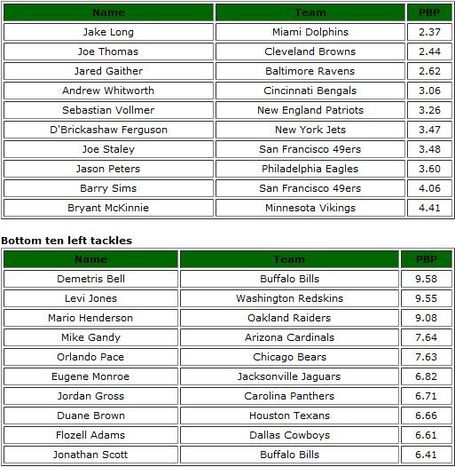 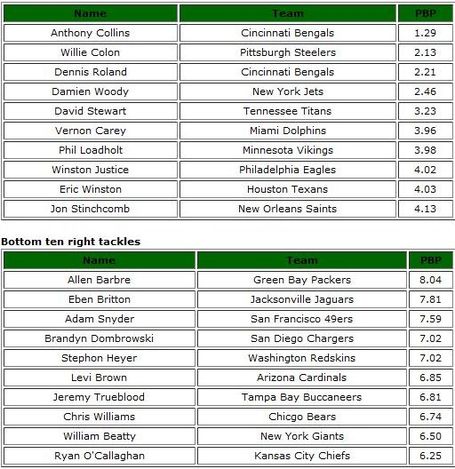 They've also done a study comparing the interior linemen and none of the 49ers make any of those lists. Some interesting names on the list--Stephen Neal (UFA) is one of the top 10 pass blocking guards. Daryn Colledge (RFA) was among the worst guards in the league in pass productivity. Among centers some predictable names are there. Jeff Saturday and Nick Mangold are in the top 10 while Kevin Mawae ranks among the worst centers in pass blocking.

With the secondary we've got some good news and some bad news and as usual, some surprising news. I love PFF because they have really detailed stats on secondary players. In their rankings they have information on the number of times that a CB or safety was thrown to, the number of times that receiver caught the ball, the number of YAC, and the total number of yards, as well as QB hits, pressures, sacks, and tackles. Join me after the jump as we go through PFF's database to see what it says about the 49ers and see if it's got any valuable information for us.

The first thing I want to do before going on a tour of the 49ers secondary is show a graphical representation of the defense as a whole. 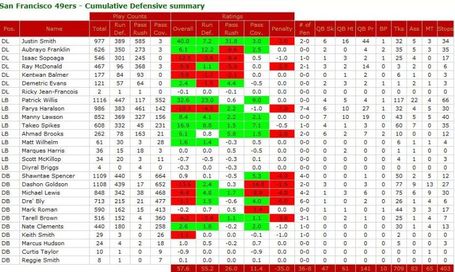 As you can see we've got some studs. Smith is the top ranked DE in their rankings, Willis is the top ranked LB. They're showing Spikes as being very solid still and among the better ILBs with Ahmad Brooks having a breakout year as well and very solid in all facets. What interests me is that they're saying we actually have decent pass coverage for the most part. The two players who have the worst pass coverage are Goldson (and I'd argue he made some improvement) and Lewis). Unfortunately those are our two safeties and that's where coverage is most important and why we need a cover safety, not CBs like everybody seems to mock to us.

Let's look at who PFF has as the best CB and safety so we can get an idea of what to shoot for. According to PFF the best cornerback in the league is Charles Woodson with Darrelle Revis a close second 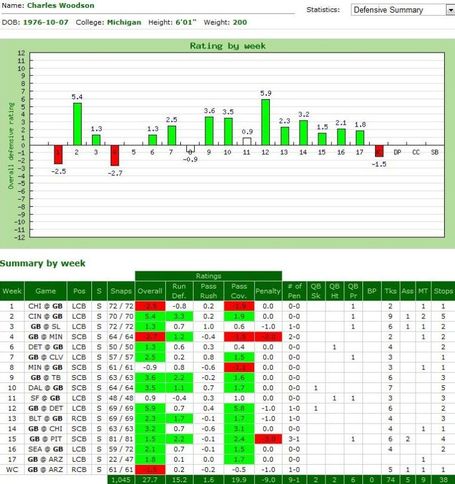 As you can see Woodson has very few negative plays and lots of positive plays which is why he's the number one overall.

The coverage chart shows some interesting things as well 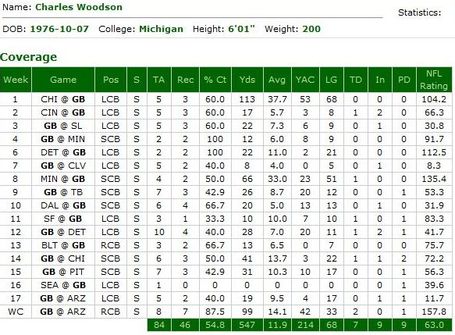 The first thing it shows is that there is no such thing as a shut down corner. The best CB in the league still allowed an average of 54.8% of the balls thrown his way to be caught. What he excels at though is the aftermath of those receptions. Very few YAC, and few yards total. That's what you're looking for in a DB. 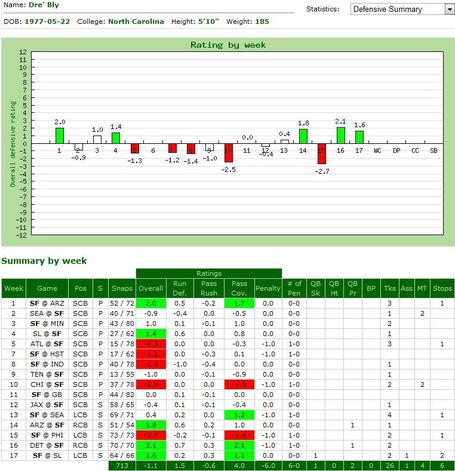 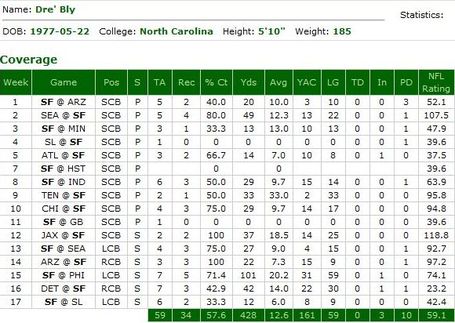 Bly's coverage skills aren't too bad either. He allowed a 57.6% completion rate, and 12.6 yards per catch average which isn't too shabby. He's still got what it takes to play in the league. 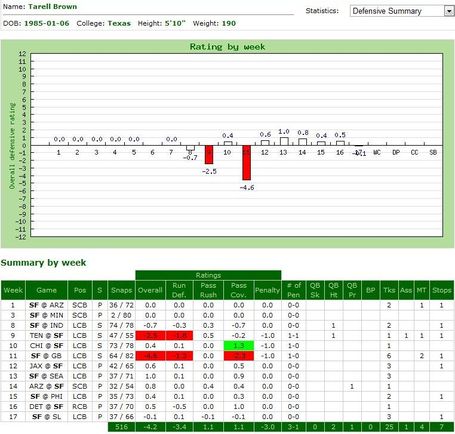 As you can see Brown is also very consistent. He had two bad games, one against Tennessee (when everybody sucked), and the one against Green Bay. Otherwise he's very consistent though he has the same issue as Bly in that he doesn't have big games either. 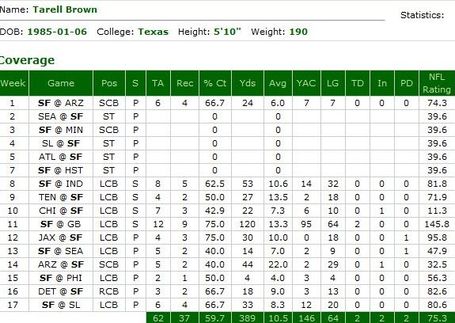 His coverage skills are less than Bly's at 59.6% average completion. He's also more susceptible to the big play. 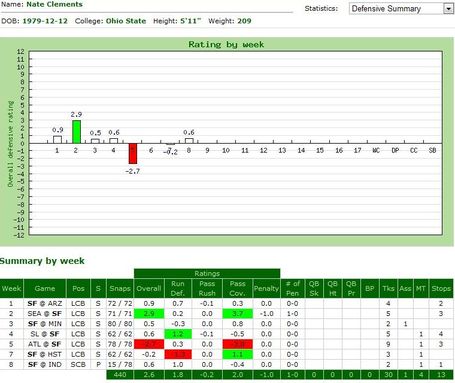 As you can see he's also very consistent though he has better pass skills than both Brown and Bly. The Atlanta game kills him because of the 90 yard TD run he gave up against Roddy White. Other than that he was very good before he got hurt. 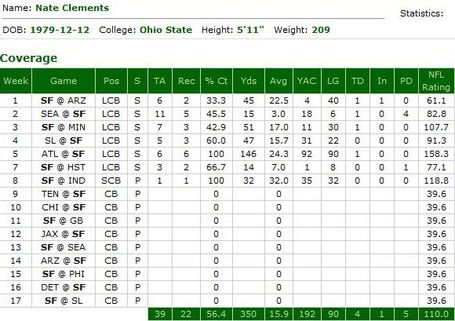 The 54.6% completion rate is actually better than Woodson's. Again what kills him is the YAC and that number is skewed because of that 90 yard TD run. 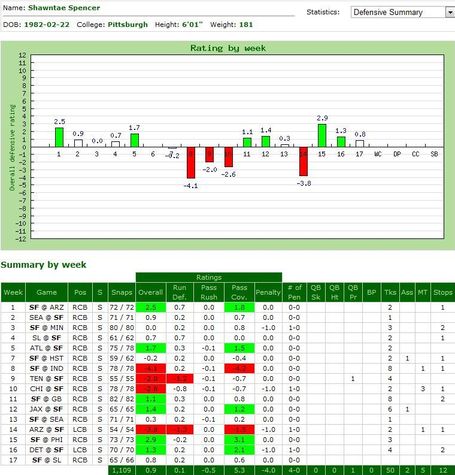 Spencer is also pretty good in coverage. His issue is with run support--he makes very few good plays, so when he screws up he has nothing to balance it out with. 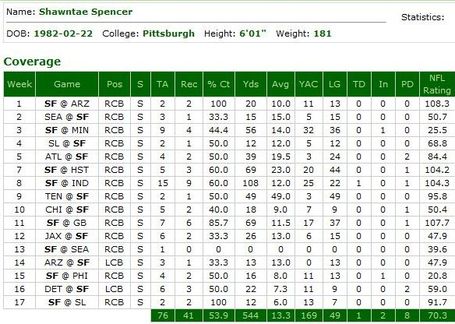 This is an even more interesting breakdown to me. Only a 53.6% completion rate? That's good enough to rank him 20th best among all CBs. Of course everything else is mid level. Here's hoping he can come back next year even better.

Moving now to the safety which is our biggest area of concern. We have Goldson and Lewis as the starter with Roman acting as more of an extra back in nickel or dime coverage. PFF has Ed Reed ranked as the best safety in the league. Like the other top players he makes few bad plays and lots of good plays. 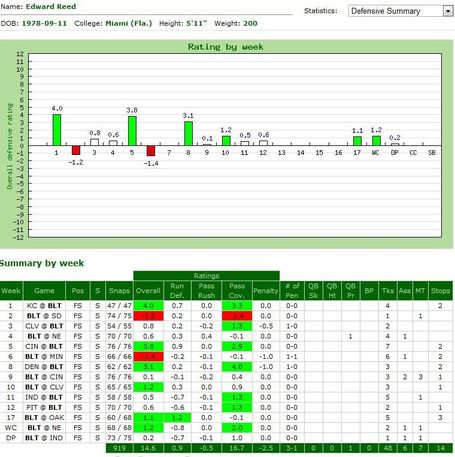 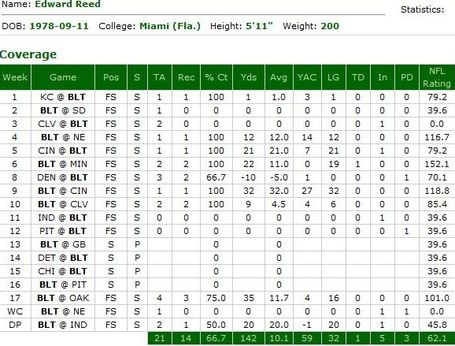 His completion percentage is actually pretty high, which for a safety is actually not surprising to me since being directly targeted is very unusual. What's very impressive is how few yards those passes gain, both from the initial completion as well as from the YAC. 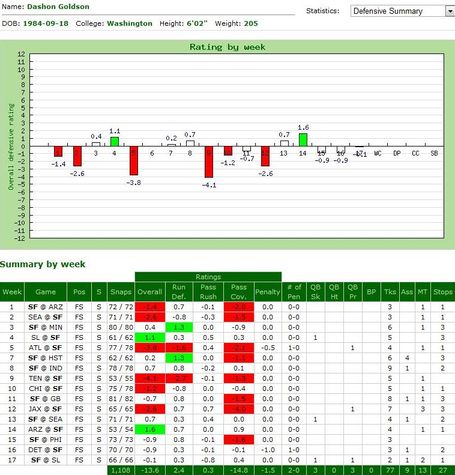 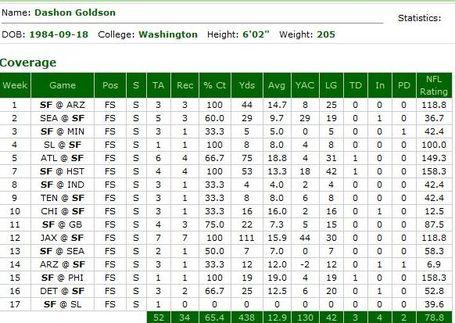 What strikes me is how poor his pass coverage is when he's targeted directly. He's also a guy who runs hot and cold. Against AZ he only allowed 33% completion, 50% against Seattle, 100% (on only one catch) against phlly and 66% against Detroit. The coverage skills are one reason why he might be better at strong safety. 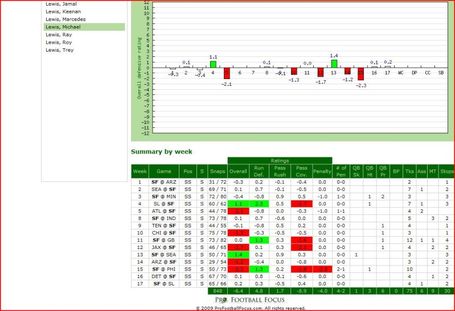 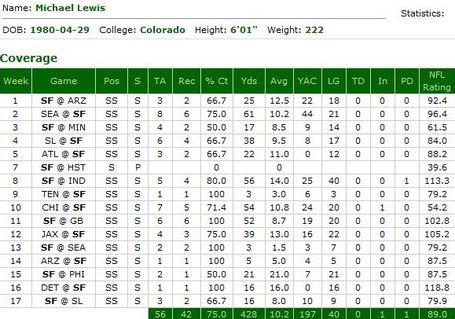 Lewis' run coverage was marginally better than Goldson's according to the data, but the pass coverage was the same or worse. 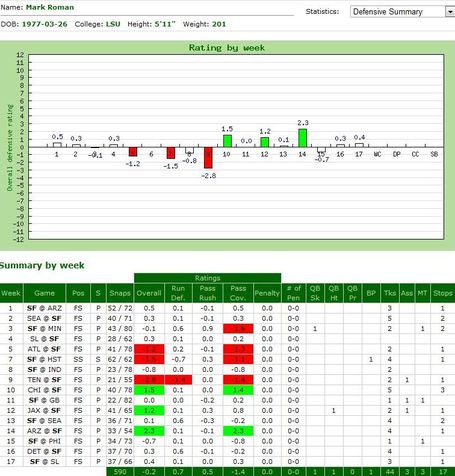 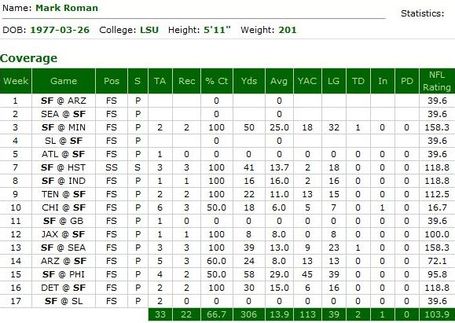 Mark Roman is also a much maligned player (mostly because of the Minnesota game). The interesting thing that the charts show us is that he's actually pretty solid for the most part. Essentially his big issue is that he doesn't make any plays on the ball (which you need to do if you're going to play safety). His completion percentage is 66% which is higher than either Lewis or Goldson. Essentially he's middle of the pack.

1. We need a pass protection safety to help over the top

2. Goldson is probably better suited to move to strong safety

3. Our conerbacks are actually solid. Not spectacular, but not horrible either

4. Clements is still one of the better CBs in the league. PFF has him ranked 24th overall (even after giving up a 90 yard TD)

6. When you filter out for starters (players taking 600 or more snaps), Spencer moves up to number 21 on the list and Bly moves up to 26.