When East Meets West: A Detailed Look at the Offensive Tackle Positions

Share All sharing options for: When East Meets West: A Detailed Look at the Offensive Tackle Positions

Oh, East is East, and West is West, and never the twain shall meet,

But there is neither East nor West, Border, nor Breed, nor Birth,

tho' they come from the ends of the earth!

It's probably pretty easy to guess which side of the fence I landed on, however I didn't have the numbers at hand. I knew that generally speaking, right tackles are bigger and bulkier than are left tackles, and that left tackles are much quicker than right tackles. Wanting to get some hard data on this I undertook a little research project over the past week or so. I went to NFL.com, pulled up the depth charts for all 32 NFL teams, and looked at the starting right tackles and the starting left tackles. I then created a spreadsheet to track this info. In the spreadsheet I included weight, height, years in the league, and what position they played in college. Join me after the jump as we dive into the nitty gritty of the material.

The accepted wisdom in the NFL is that the left tackle needs to be quicker on his feet and faster to react than a right tackle (unless that right tackle is protecting a lefty QB). The obvious corollary to the need for speed is that the guys on the left side need to be smaller, to help them move faster. Now there will be exceptions (there always is), but that's the norm. On the right side you want the big mauler guys.

Does that standard wisdom hold up to cold, hard facts? Well yes and no. Your average left tackle weighs in at 316 lbs and is 6'5" tall. (This is from a small of 295 lbs to the largest left tackle at a whopping 345 lbs). Your average right tackle weighs in at 319 lbs and is also 6'5" tall. (Smallest at 300 lbs, largest at 343). The really interesting part is where the distribution lies. 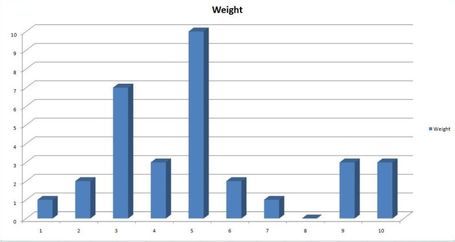 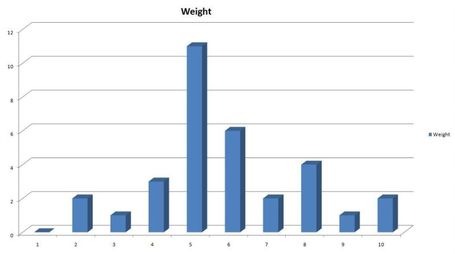 Both groups have a strong cluster at the 315-319 mark which I found very interesting.

The other question that was brought up was regarding the necessary skill sets to play left tackle. One contention was that if a player doesn't succeed at left tackle he can just be slid over to right tackle without a problem, and that a large portion of NFL right tackles were college left tackles. I didn't think this was true as there's a completely different skill set involved, so I wanted to take a look at college position and current NFL position.

In listing the college position I used the one that they played the most games at. As an example Duane Brown (left tackle for the Houstons) started his college career at tight end. He was then moved to right tackle for two years and finished up his college career with one season at left tackle. For tracking purposes I listed him as a college right tackle. If a player spent the same amount of time at different positions I listed him as the position he played last.