Share All sharing options for: Caption This: Your possible future backup quarterback 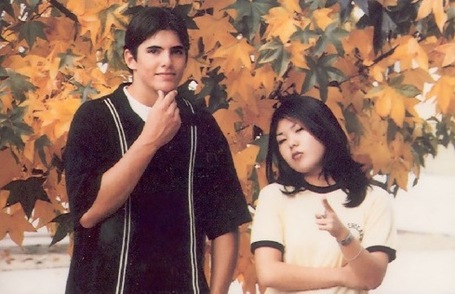 After the jump I've posted the winning caption for the Jerry Jones/Mark Cuban picture.  For our next caption this contest, we are fortunate to have a classic picture that is just asking to be captioned.  For those that missed it, yesterday we had a running thread for David Carr's pow wow with the Bay Area media.  The only problem was that it never actually took place, as Carr was out the door before the media could speak with him.

The glory of the whole thing was that the open thread yielded some comedic gold, including some intriguing photos like this.  When you're sitting around waiting for a press conference to start, it's easy to get bored.  Thankfully we've got some incredibly creative people.  TexansDC wandered over into the thread and posted this picture of David Carr and Darcy Maeda, who were voted Most Likely to Be Famous at their high school.  We know where David Carr is.  A quick google search revealed a few details, and even a t-shirt, involving Darcy.

Anyways, I'm not sure what kind of captions folks will come up with, but I'm sure people can nail a few good ones.  This was the "Most Likely to be Famous" photo, so if you want, you can even make your caption a "Most Likely" about Carr.

Pinky: "What are we going to do tonight, Brain?"
Brain: "The same thing we do everynight, Pinky… try to take over the world!!!"