Share All sharing options for: The signing of David Carr and the impending doom for one unlucky 49ers QB

And so your fearless leader makes a cameo appearance from sunny Mexico. When I checked in on the site yesterday, I noticed the 49ers signing of QB David Carr, and the subsequent barrage of comments that resulted. Maybe not quite the level of Carr's epic weekend press conference, but sufficient nonetheless. And it's understandable that such a signing would trigger this level of response. The 49ers QB position has been one of great debate and at times, angry vitriol. This is not the 49ers bringing Moran Norris back into the fold, or signing Takeo Spikes to a contract extension. This is the most divisive position on the team.

So first off, where are we at? Well, the 49ers have corralled four quarterbacks: Alex Smith, David Carr, Shaun Hill and Nate Davis. What does this mean for the 2010 season and beyond? Well, I think we can all agree Alex Smith is not going anywhere in the coming season. Given that the 49ers just signed David Carr to a 2-year deal, I'd imagine they like his chances of making the roster in August. That leaves two quarterbacks that draw amazingly strong opinions. It's amazing because of how little experience both guys have in the grand scheme of things. Obviously Hill has much more experience than Davis, but compared to most QBs, it's not much. Of course, given the evolution of the 49ers QB position over the last five years, that's not exactly shocking.

After the jump we cut to the chase with the Hill/Davis debate and we roll out a picture that hasn't been seen around these parts since last training camp...

In the Carr signing thread, I noticed a couple comments from folks stumping for Shaun Hill. His performance down the stretch of 2008 was a strong factor, among many, in the 49ers being in a position to offer Mike Singletary the head coach position. There were many factors, but Hill's performances certainly can't be discounted too much. And, of course, Hill has quite the fan-club among 49ers fans.

At the same time, barring a major injury, I really would be shocked if the Shaun Hill was a member of the 49ers on week 1 of the 2010 regular season. In fact, I'd be a bit surprised if he was a 49er at the beginning of the preseason games. It wouldn't shock me if he was around to compete, but I'm not expecting to see Hill in a 49ers uniform at the start of training camp.

The only thing I have to base this prediction on is my belief that the team would want to use that third QB position for developing a younger QB. Alex Smith is arguably the QB of the present (depending on your feelings about David Carr). Shaun Hill is not the QB of the future, and I really don't see anybody arguing otherwise (but feel free to have a go at it). Nate Davis may not be the QB of the future, but the 49ers don't know anything for sure yet. Ok, let's correct that. On the surface, to the fans, the 49ers do not appear to know much about the long term potential of Nate Davis.

In looking at Nate Davis, we're talking about a guy with limited pro experience against hardly talented opposition. He put up big numbers at Ball State, which could mean everything, or could mean nothing. Some will throw out the Ben Roethlisberger argument, but obviously one can counter with the assortment of MAC QBs that have not hit the big time. Simply put, it's one small piece of a much bigger argument.

So how do I feel about Nate Davis? Well, I know we don't know enough to throw him out there in the middle of a regular season game with big consequences on the line (so no, he should not be the starter at this point). At the same time, I also think he does have a lot of talent. He's a guy with potential and I would love to see him evolve into a stud in this league, guiding the 49ers back to Super Bowl glory. Of course, if we're throwing out wishes, why not just wish for Alex Smith to show why he was the #1 pick and let him be the one to return our beloved franchise back to the mountain top.

If we look at the third QB position, it just doesn't seem logical to use the spot on Shaun Hill. The argument for keeping him around would be that the team thinks it has a legit shot to make some noise around the league, and they want to have as much back-up security with legit experience at the QB position. If Smith or Carr went down, having Hill be able to step in as the #2 QB would probably be rather valuable. At the same time, I remain convinced that if the team needed another backup QB because of injury concerns, there would be some decent enough talent out there.

I realize Nate Davis's "potential" may never amount to anything. And if that's the case, the team didn't really waste much given that he was a late-round pick-up. However, I really don't see why somebody wouldn't want to keep him around to see what more could develop out of the youngster. People say he put up decent numbers against crap competition in the 2009 preseason. So, maybe give him some more playing time against the better units earlier in preseason games. And if that doesn't happen, I'm fine letting him sit and learn for another year. I suppose this could be a bit of just worrying too much about him blowing up after leaving the team. But given that he's cheap (4 years, $1.9 million total) and in a position that really shouldn't have much impact on the team's 2010 season, what harm is there in keeping him over Hill at this point?

On a closing note, seeing as Shaun Hill might be on the next train out of town, I thought I'd roll out a picture I took of Hill at training camp last season. I'd say it more or less says all we need to know about the man. 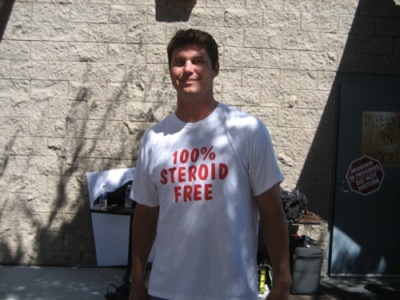