Where Are They Now: The Coaches, Part 3

Share All sharing options for: Where Are They Now: The Coaches, Part 3

I'm amused by how often ideas get reused in professional football, and how football schemes go through phases. We talked about the 3-4 defense a couple of weeks ago and I found it ironic then that it was invented in college, but found it's popularity in the pros. The wildcat is basically a variation of the single wing, a formation created by "Pop" Warner way back in the early 1900s. That formation would be used in college, then find it's way to the pros, then disappear by the mid 50s. 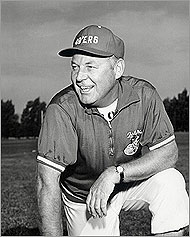 "Red" Hickey spent over two decades as an NFL scout for the Dallas Cowboys, but it was during his five seasons with the 49ers that he would invent an offensive scheme that would change football and revolutionize the game.

Hickey was a good enough football player to get drafted, but would only play three years in the league, being drafted by the Cleveland Rams (who would end up moving to Los Angeles during his playing days). That playing time was interrupted by WWII, and Hickey would spend three years in the Navy as a gunner before returning to the Rams in 1945. In 1949 he would retire from football to take a job as an assistant coach with the Rams.

In 1954 he was hired as an assistant by 49er coach Red Strader, and when Strader was fired in 1955 Hickey would say under new head coach Frankie Albert. As an assistant WR/QB coach Hickey would invent the "Alley-Oop". We all know it as a basketball play but it was originally designed to use R.C. Owen's phenomenal leaping abilities to get over the heads of the defender and with Y.A. Tittle throwing it was incredibly effective.

Albert resigned as head coach in 1959 and the 49ers offered the job to Hickey, taking an unprecedented (for them) step of giving him a three year contract. It was during second year that Hickey would change football forever. The 49ers had been inconsistent all year long and were scheduled to face a Colts team that had been dominating offenses with it's defensive line. The 49ers were scheduled to face the Colts on November 27. The story goes that Hickey called together his coaches and asked for a show of hands from anyone who thought the 49ers could win with their current offense. Not a single hand went up. Hickey would then scrap the single T formation and create the shotgun formation for the game. He reasoned that if a QB had an extra 7 steps it would give him that much more time to throw. He would prove to be right as the 49ers would go on to shock the football world by defeating the Colts 30-22.

The head coach of the Colts would later admit that he had spies at the 49ers practice before the game but never thought that the 49ers would have the guts to run that formation.

Sadly that would prove to be the highlight of Hickey's time with the 49ers. He resigned midway through the 1963 following a 45-14 thrashing by the Vikings.

Following the 1963 season he would join the Cowboys as an assistant coach. After being turned down for the head coaching job of the expansion Falcons in 1966, he resigned as coach and became a scout for the Cowboys for well over two decades. When Tom Landry was hired as head coach of the Cowboys he would ask Hickey to show Staubach the shotgun formation and would use it as the basis of his spread offense.

Here's a cool tidbit from the SF Chronicle when Hickey was hired as coach.

1958
Dec. 17: "This is the best day of my life," said Howard "Red" Hickey, an Arkansas Irishman who was born to coach 41 years ago. Hickey had just been given a three-year contract to replace Frank Albert, who retired unexpectedly as coach of the 49ers. "This is the best job in the world, and there is no place to go except down," Hickey said after the 49ers had shown extreme confidence by giving him a long-term contract in contrast to club policy. Albert quit for the sake of his family. His wife, he said, was being insulted in stores where she shopped, and his 6-year-old daughter worried about completed forward passes. Asked how his family would like the pressures of a head coach, Hickey said: "I've wanted to be a coach since I was a little kid. My wife, my high school sweetheart, knew it then. If she doesn't like it now, it's too late."

Want to go way back? Here's an article from October 12, 1959 from the Sports Illustrated Vault. It's a must read, if only for the historical value.

It Helps To Be Mean If You Aren't Too Big 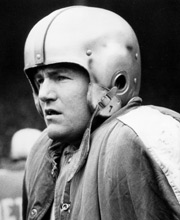 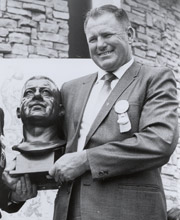 Christiansen had a much more successful playing career than did "Red" Hickey, though his coach career would be less illustrious. Christiansen played his college ball at Colorado State University and was drafted by the Detroit Lions in in the sixth round of the 1951 draft. He was a dominating defensive back, playing in five Pro Bowls and winning All-Pro honors six years in a row. Amazing for a guy who was 6'1" and only 162 lbs. He also returned punts, running back eight of them for touchdowns during his career. Christiansen set a punt return record his rookie year that has yet to be broken. In two separate games he ran two punts back for TDs, a pretty impressive feat.

He retired from football in 1959 and was immediately hired as an assistant under "Red" Hickey. (Coincidentally he would be joining a staff that included his former college head coach). When Hickey resigned during the 1963 season Christiansen was appointed interim coach.

The 49ers would only win two out of the following eleven games, but the highlight of the season would be a victory over the Bears, the eventual champions. Christiansen struggled as a head coach, going 26-38-3 over his tenure. His single best year was 7-6-1. Christiansen would be fired in 1967

Jack fared a little better as a college head coach, going 30-22-3 during his tenure. He wasn't a very good recruiter and lacked the discipline required to keep his players off academic probation. He was fired in 1976. In 1977 he spent one year as an assistant for the Chiefs, and after a head coaching change was hired in 1978 to be the defensive backs coach for the Seahawks.

After another coaching change he was let go during the 1982 season and was picked up by the Falcons. Sadly he would only spend one year with them before being diagnosed with cancer. Christiansen would spend the next 30 months battling the disease but to no avail. He died June 29, 1986.

Six weeks before his death he was inducted into the Michigan Sports Hall of Fame.

Christiansen was inducted into the NFL Hall of Fame in 1970