I like to think of the West Coast Offense as a grown up version of sandlot football. As a kid playing football you wouldn't run a set play, instead you'd tell your receivers what routes to run and then throw to the open guy. That's essentially what the West Coast Offense is. Because it's that simple it's also very easy to adapt and change to just about any circumstances.

Some of the winningest coaches at the NFL and college level have used the WCO, and in fact it was actually developed separately by at least three different head coaches, Don Coryell, Bill Walsh, and Lavell Edwards.

Bernie Kosar was actually the one who coined the term "West Coast Offense". In an interview with Sports Illustrated he compared the 1993 Cowboys offense to those of the West Coast. By this he meant the Chargers under Sid Gillman and later the Raiders under Al Davis (who once upon a time was a brilliant football mind), and the St. Louis Cardinals under Don Coryell. The reporter mistakenly applied the term to Bill Walsh's passing offense of the 80's and, despite opposition from Walsh, the name stuck.

Also in 1993 Bill Parcells scornfully mentioned the offense in a post-game interview after the Giants beat the 49ers in a playoff game. Parcells derided the so-called "finesse" teams in favor of power running, and after his Giants won he asked a reporter "What do you think of that West Coast offense now?"

Now when we talk about West Coast Offense we're almost exclusively referring to Bill Walsh's brand, but I think it's actually more of a philosophy of coaching than it is an exact offense. Right now I want to take a look at the three coaches who had a pivotal role in developing the WCO. Next week we'll actually look do some chalk talk and break down some playbooks. 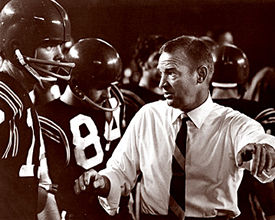 Don Coryell brought it to the Chargers in 1977 and won three consecutive division titles in 1979, 1980, and 1981. His offense is designed around a passing game that features mostly short and intermediate passes, combined with an inside power running game and the occasional downfield throw. The wide receivers line out across the entire formation to spread the offense. Typically two of them go deep and other are intermediate. When the defense starts backing up to prevent the intermediate and deep balls then the offense moves to the inside run game, powering up the middle to eat up the clock and further wear down defenses already tired from running around.

Coryell's overall record was 111-83, and is the first coach to ever win more than 100 games at both the collegiate and NFL levels. He would win 5 division championships with his offense. 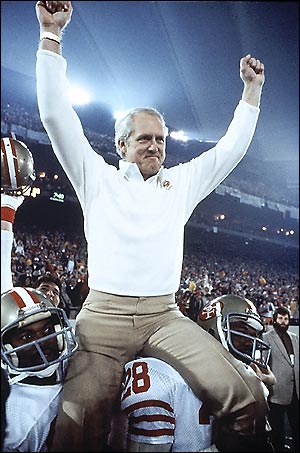 Walsh's system used more of a timing system than did Coryell's. This timing system sometimes required a QB to throw the ball before the receiver reached that point in his route. The WR in Walsh's system also had more options as to what routes he would run, so if the QB and the WR weren't on the same page the QB would end up looking foolish as he throws a ball to no one (best case), or tosses an interception (worst case). If you have a mobile QB this makes it even more deadly for the defense, and it's why offenses that use a mobile QB and the West Coast Offense do so well. (It's also one reason why I think McNabb will have some good success with the Redskins.) 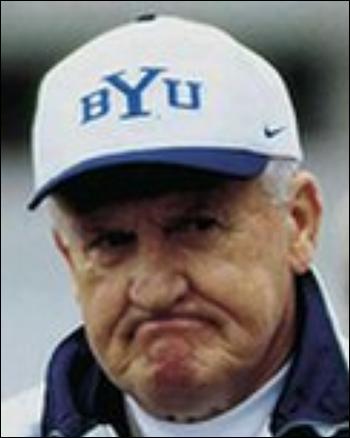 Lavell Edwards also developed a version of the West Coast Offense during his time at BYU. He was hired as head coach in 1972 and installed his system that year. Previously BYU had tried to run first and then pass, but they had a dismal record. Edwards decided to do the opposite and went pass first and then run. His playbook utilized the simplicity of the West Coast Offense. Receiver positions would be named (generally x,y,z). Routes would also be named. Edwards could then call in a play and read off a combination of route and receiver. This allowed him to keep his playbook very short. He had less than 15 basic pass plays, and less than 5 basic run plays. This allowed the offenses to learn the playbook quickly and then perfect it.

Edwards would go 257-101-3 during his career at BYU. He would go 7-12 in Bowl Games, and win one National Title. His quarterbacks threw for well over 100,000 yards and 635 touchdowns. His coaching tree includes two Super Bowl winning coaches, and several college head coaches.