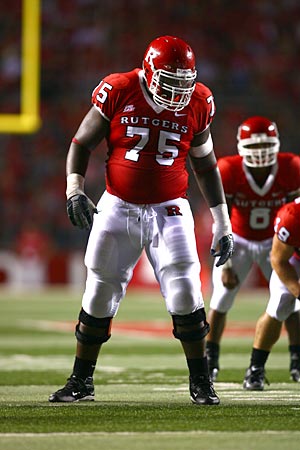 5 MORE DAYS UNTIL THE DRAFT...

Many people have speculated both positive and negative things about how well Anthony Davis will be at the next level. The biggest question mark that has been noted is his lack of work ethic. Sometimes players are just lazy and things like that cannot or will not be coached (See: JaMarcus Russell). Plenty of people will disagree saying that if he lands in the right situation, he can be coached to work hard to be a good professional. While there is truth to both those statements, it will solely be up to Davis to show the world what he is made of.

As we move closer to the draft, Davis' stock has slipped just a bit. Some of the more recent mocks I have seen have Davis being selected anywhere from the Giants all the way down to the Cowboys with the 27th Pick. There is some chance that he could end up with the 49ers with the 17th Pick if he slips past the Giants at 15. He could be an immediate starter at right tackle coming in to the league. So far, Davis has worked out and met with a few teams; the 49ers are included as one of them.

Overall, it is hard to predict how someone's game will translate in to the pro's. On one side, you have your "sure-thing" players that bust, and on the other side you have your "sure-thing busts" that turn out to be stars. The NFL Draft is one of the biggest guessing games in any pro sport. My guess is that Anthony Davis won't be anything more than an average tackle at best in the NFL. I am sure there are opinions that differ from that, but he struggled against some of the better competition of the Big East at times in the years leading up to this.

Below, we will take a look at some of Davis' highlights and then I will provide a projection on where I think he could end up in this years draft.

Anthony Davis is wearing number 75 in this video for those of you who have never seen him play. The feed here illustrates some of Davis' strengths and weaknesses. He will have to work hard at the next level.

Davis is a monster as far as size is concerned. He stands 6'5" tall and weighs 323 LBS. That is the one thing he has going for him, he is a mountain to get around. However, he doesn't possess quickness off the ball which often leaves him exposed agains the quicker and faster competitors. His lateral movement isn't great and he is stiff out of the snap. These weaknesses make it hard to see the positives because they are pretty vital to success for a lineman in the NFL. There are a few positives though. Davis has decent pass protection skills and holds his ground well in that regard. In the run game, he whiffs sometimes though. We will see how well he does here very shortly.