Where Are They Now, The Coaches Part 4

Share All sharing options for: Where Are They Now, The Coaches Part 4

The picture is of Kezar Stadium. I wanted to include a shot of it since all these coaches worked out of there.

Join me after the jump.

Lawrence T. "Buck" Shaw was the first head coach of the San Francisco 49ers. Shaw was born in the 19th century (March 28, 1899), and died March 19, 1977. Oddly enough Buck Shaw played very little organized football. He played one football game in 1918 for Creighton university. In 1919 he transferred to Notre Dame where he was a track and field star and came to the attention of Knute Rockne who drafted him for the football team and turned him into a star.

He played left tackle and right tackle clearing running lanes for the legendary George Gipp, and that was the entirety of his football career as a player.

Rockne recommended him to several schools looking for a coach and started working as the line coach for Nevada in 1925. Four years later he went to Santa Clara University as an assistant from 1929-1935. At that time they only had enough money to hire coaches on a seasonal basis, so the rest of the time he had to find other work. He was working for Standard Oil in 1936 when he was offered the head coaching job. He was head coach from 1936-1942 and in that time went 47-10-4. His first two seasons coaching he won back to back Sugar Bowls over LSU. In one game he actually couldn't fly with the team due to illness but he called in plays over the telephone.

In 1942 Santa Clara dropped football due to WWII and Shaw stayed to help develop the campus physical training program for the Army.

In 1950 the 49ers joined the NFL and retained Shaw as their head coach until 1954. His total record with the 49ers was 71-39-4, which is second only to George Siefert for winning percentage. Shaw stayed out of coaching for a couple of years but in 1958 was lured back in with the head coaching job for the Philadelphia Eagles. In 1960 he beat Lombardi's Green Bay Packers in the NFL Championship game (the only head coach to ever beat Lombardi in an NFL championship game), and retired from football in 1961.

Strader spent most of his life in coaching, but only one season for the 49ers. His coaching career started in 1928 with the head coaching job for Regis College in Colorado which he held for 4 years. In 1932 he returned to California as an assistant at St. Mary's College and stayed there for 8 years. In 1940 Slip Madigan retired as head coach and Strader was offered the job. In 1942 Strader joined the Navy and spent the next three years in the service.

Once the war was over he joined the All-America Football Conference as a backfield coach for the New York Yankees. In 1948 he became interim head coach and took the Yankees to the playoffs in 1949. In 1950 the AAFC merged with the NFL and Strader stayed on as head coach of the Yankees. He had a heart attack that year and in 1951 the owner of the Yankees fired him.

Strader would sue the Yankees and win $10,000 plus expenses for the firing.

In 1952 he spent a season with the 49ers as an assistant coach and a scout before resigning. The next couple of years saw him working in construction and continuing to scout. He was briefly considered for the head coaching gig for the Baltimore Colts but they decided on Weeb Ewbank.

10 days after Shaw's firing Strader was hired as head coach of the 49ers. Strader's 49ers had a strong pre-season, but would open the season 3-3. After a bitter loss to the Rams a fan would actually hang Strader in effigy outside Kezar Stadium (maybe the only head coach in the NFL to have that happen) and the 49ers would end the season a paltry 4-12. Strader was fired December 19th of that year. Almost a year later he would die of a heart attack. 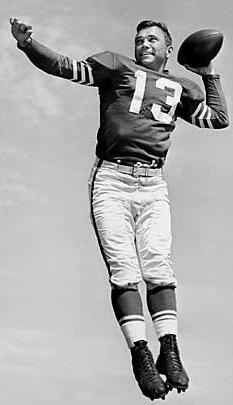 Albert was a rather mediocre head coach but one of the great players of the games. Albert played his football at Stanford University and was good enough to be drafted in the first round by the Chicago Bears as the 10th overall player in 1942. However like most everyone else his career was put on hold for WWII and he spent the next three years in the war.

In 1945 he joined the Los Angeles Bulldogs of the Pacific Coastal League, but spent just one season there. However he came to the attention of head coach Buck Shaw who signed him to play for the 49ers. He would spent the next seven years as a 49er, throwing for over 10,000 yards, no mean feat in those days. In 1948 he was named the co-MVP of the AAFC. The other co-MVP was Otto Graham.

Albert's last two seasons with the 49ers were spent competing with Y.A. Tittle for the QB job.

Albert would lose the QB job and head north to play for the CFL's Calgary Stampeder's where he would stay until 1955. After Strader was fired Albert was offered the head coaching job of the 49ers, even though he had never coached at any level.

Albert was notable for having once punted the ball 79 yards during a college game, as well as being credited for inventing the bootleg. Albert would die in 2002 from complications arising from Alzheimer's.