Now we get to dive into the nitty gritty of the the West Coast Offense. We're going to be using Bill Walsh's playbook from 1985, which I've uploaded if you want to take a look at it yourself. It's 356 pages long and packed full of information. It's also hard to read at points because it's been copied so much that some of the letters are faded and there are some weird page angles that cut off some of the details. It's still a fascinating document. I also have Holmgren's 49er offense from 1991, Cowboys' 1992 offense (which is rather amusing since it appears to be written in a loose leaf notebook) and the Rams' 2000 offense, all of which use variations of the West Coast Offense.

I won't be going over each of those simply because that's far too much information to try to absorb (there's a reason that college players sometimes have a tough time making the switch to the pros). We'll mainly focus in the 1985 playbook and i may take a look later through the 1991 playbook.

Join me after the jump as we look at the 1985 offense.

This section we'll be looking at the basics of the offense. This includes huddle information, basic formation information, snap counts, etc. 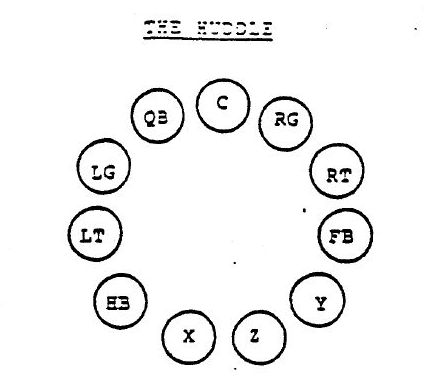 Walsh wanted his players to huddle up in essentially the same order that they would line up on the field. The next picture showing the basic formation shows how the huddle unfolds itself into a straight line.

As you can see each spot is labeled. The outside WR ix the X receiver, the Tight End is the Y receiver, and the Z receiver is lined up back of the line of scrimmage. Sometimes the Y receiver will be an actual WR, but not often. The QB is under center and the two backs are lined up next to each other.

In the huddle the players would've been told the following info:

The sequence after the huddle is important too. The WRs leave the huddle first, and the offensive line does not drop into their stance until the QB says "Set", at which point they drop. At that point several things might happen.
Examples of play counts
The colors refer to formation lineups.

There are several basic formations that the 49ers used, and they all had specific names which enabled the play calling to be simplified. In order of frequency: 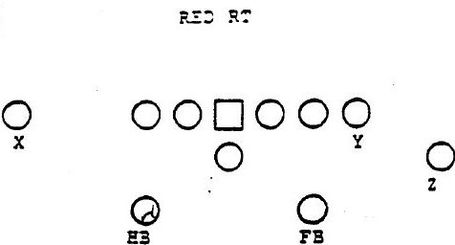 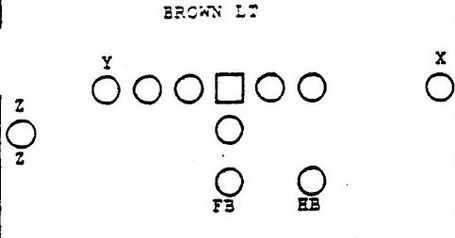 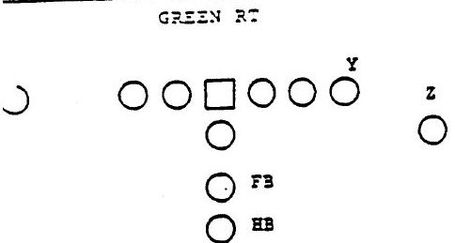 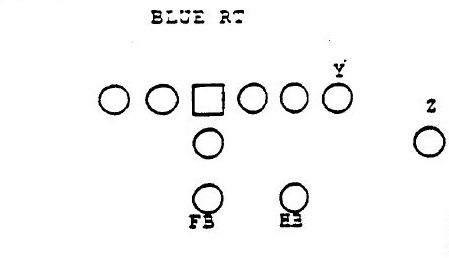 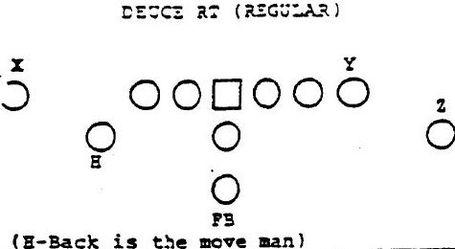 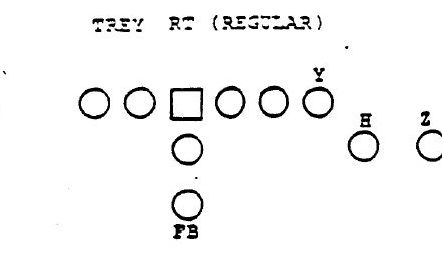 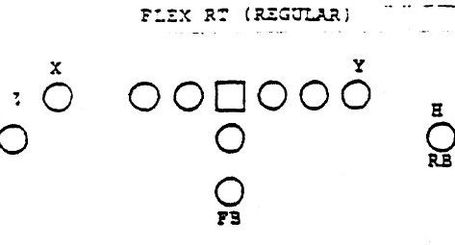 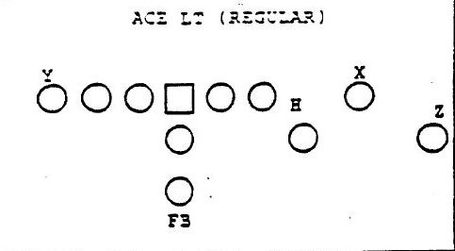 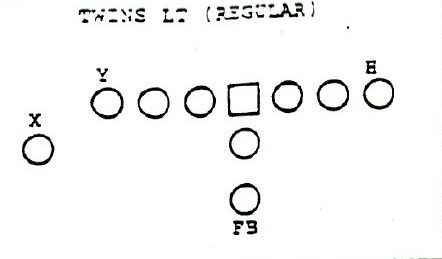 On this formation the copy cuts off the Z receiver which is lined up even with the X receiver.

So here's the run-down of what would happen at the beginning of a play. The center would start the huddle 8 yards back from the LOS. Quarterback would line up next to the center and the rest of the players in their designated spots. The QB relays the play, in this case we'll say it's Green 58 (58 being the play number), but he tells the team to check with him.

By telling the team to check with him he's letting them know he might be calling an audible at the line of scrimmage.

When he comes up to the LOS he sees that a LB is crowding, giving every indication that he'll be blitzing, so he decides to audible. He starts the snap count with "Set", pause "Red 52", pause, pause, Hut, Hut.

As soon as the players hear the color, they know that it's now a "live" color. A "dead" color would be if the QB stuck with the original play which was Green 58. Since it's an audible they also know that the snap count is on two. The reason the QB gives the two second pause after calling the play is to give players an opportunity to process the play.

Once the ball is snapped the players fulfill their responsibilities (hopefully), and yardage is gained.

Next time we'll be getting into blocking assignments, which probably covers 1/3 of the playbook, and after that it will be WR routes, at which point we'll probably be done. I'm trying to go slow with this because some of this stuff is kind of complicated, but I don't know if I'm going too slow, which is why I've included the poll.