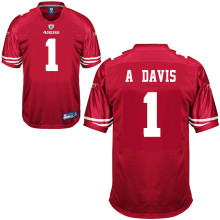 The 49ers leapt over the Miami Dolphins, acquiring the Denver Broncos 11th pick of the draft, in exchange for #13 and their 4th round pick. With that the 11th pick, the 49ers selected Rutgers offensive tackle, Anthony Davis. I know a lot of folks are wondering why they made the move up to get him when either Davis or Bulaga was potentially going to drop to 13. I'm curious to hear what football ops has to say about this move up and the pick of Davis.

At ESPN.com, Davis gets exceptional for awareness and pass protection, but average for toughness and run-blocking. For those wondering, Davis was 11th on our Big Board, while Bulaga was 5th.

After the jump I've posted some in-depth details on Davis, courtesy of the NFL.

Considered to be one of finest athletes in the 2010 NFL Draft, Davis has the long wingspan, large hands, balance and body control teams look for in a quality pass protector. With his ability to come off the snap at a low pad level, along with his lateral agility, some professional teams are also considering him as a potential pulling guard at the next level.

Davis has drawn comparisons to Jacksonville's Eugene Monroe, due to his athleticism. He has shown flashes of brilliance on the football field, at times. Teams just hope that as he matures, both on and off the field, that he will begin to show the consistency that his athletic potential displays. He has made more of an effort in recent years, especially in controlling his weight issues.

Davis originally joined the Rutgers program as a 363-pound freshman, but worked hard prior to the 2009 to maintain his weight, pleasing teams when he arrived in Indianapolis for the NFL Scouting Combine and checked in at 323. Still, most teams felt that he could have used another year of experience at the collegiate level mastering the art of playing the demanding left offensive tackle position.

Davis attended Piscataway High School, where he was a three-year starter on the offensive line. He was named first-team All-American by USA Today and competed in the U.S. Army All-American Bowl after his senior season. He received a four-star recruit rating from Rivals.com, as that recruiting service rated him the fifth-best offensive guard in the nation and the top prospect in the state of New Jersey.

When Davis chose to enroll at Rutgers instead of accepting a scholarship offer from Ohio State, he became the first top prospect from the state of New Jersey to perform for the Scarlet Knights during head coach Greg Schiano's tenure. As a true freshman, he played in every game, moving into the starting lineup vs. Syracuse, where he remained with the first unit for the final eight contests.

Even though he was not the team leader in blocking consistency grades (82.58%), knockdowns (89) or touchdown-resulting blocks, his reputation as an athlete saw the Walter Camp Foundation honor him with All-American second-team honors in 2009. The league coaches only named him to the All-Big East second-team.