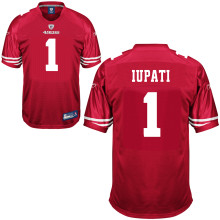 The 49ers completed their first round (barring a trade) by attempting to really rebuild their offensive line by selecting Idaho guard Mike Iupati. I'm a bit surprised the 49ers went with two offensive linemen, but given that RT and LG were two major areas of concern last season, I suppose we shouldn't be surprised.

Over at ESPN.com, Iupati got exceptional marks for toughness and run-blocking, with above average marks for awareness and pass blocking.

I realize some folks don't like this pick, particularly combined with Davis. However, when your biggest concern is the offensive line, I personally think the team has added some very interesting options. Baas and Snyder are on notice.

After the jump I've posted some background on Iupati, courtesy of the NFL.

While offensive tackle is generally considered the "glamour" position when professional teams analyze blockers eligible for the draft, many teams feel that it is an offensive guard who is the finest prospect among the 2010 draft’s "big men" - Michael Iupati.

By the end of his 2009 campaign, even the casual football fan recognized his ability to dominate the action in the trenches. As a senior, he became the first Idaho Vandal to earn All-American accolades since Hall of Fame offensive guard Jerry Kramer in 1957. Kramer received honorable mention while Iupati garnered numerous first-team mention.

Iupati was named one of three finalists for the 2009 Outland Trophy, alongside Russell Okung of Oklahoma State and eventual winner, Ndamukong Suh of Nebraska. Since the inception of the award in 1946, only major college players were bestowed that honor. The last time a non-BCS school featured a player who was even a finalist for the award was in 1992 – offensive tackle Willie Roaf of Louisiana Tech.

Iupati is no stranger to the media that covered the Western Athletic Conference, though. The two-time winner of Idaho’s Wayne Anderson Coaches Award, he was recently selected to the WAC’s All-Decade Team. He was the only active player chosen to that unit.

The left offensive guard led the major colleges with a blocking consistency grade of 90.38% in 2009, as he went on to solidify his "pedigree" with an excellent week of displaying his skills vs. the more publicized linemen during practices leading up to the Senior Bowl. He was just the eleventh player in school history to play in that prestigious all-star classic, and the first since 2000. Based on reports from every pro team, he certainly made a lasting impression.

"Mike's performance this season has established himself as potentially the best offensive guard in the upcoming NFL draft," Senior Bowl President and CEO Steve Hale said. "Anyone who watched him play this year knows that he was clearly a difference maker for the Vandals."