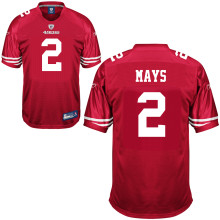 The second round got a bit crazy, leaving the 49ers with a wide variety of possibilities at the 49th overall pick. They went with a guy who won't need to start right away, but fills an area where need is not too far off, at strong safety. I'm a big Michael Lewis fan because he is great in run support and does what is asked of him. However, after his concussions this past season, it's clear he's not going to be in the NFL, or at least with the 49ers, for a whole lot longer. In Mays, the team gets a guy who could slot right into that role in the future. Many considered Mays nothing more than a big-hitter, lacking in coverage skills, but given the role of Dashon Goldson as the proverbial "ball-hawk," Taylor Mays is a very nice complementary pick.

After the jump, I've posted some background info courtesy of the NFL.

Most sons grow up wanting to be just like their fathers. Taylor Mays, however, did not follow the same football path of his father, Stafford, who was a 255-pound pass rusher during his National Football League career with the Cardinals (1980-86) and Vikings (1987-88).

"My dad retired in 1989, so it wasn't like I ran around NFL practice fields when I was young. But he gave me a lot of insight. He could tell me about things because he went through them," said Mays. Mays instead became a safety, commanding the center of the football field while stationed deep in the secondary. Built like a linebacker, but blessed with the speed that many cornerbacks covet, the Trojans defensive back relished his role as the man assigned to keep the opposition from scoring.

It was a natural fit for Mays playing in head coach Pete Carroll’s zone concept. A former prep track star, his quickness, combined for the perfect set of skills. Carroll was an assistant coach with the Vikings when Taylor’s dad played in Minnesota. Mays developed quickly and was thrust into the starting lineup after just one college game under his belt as a true freshman. He was productive his entire career, delivering 276 tackles in 51 games at USC. Mays was projected to be a first round pick in the 2009 NFL draft, but returned to school for his senior season.

At O’Dea High School, Mays was one of the most highly-touted prep players in the country. His blazing speed and athleticism made him star on both the football team and the track and field squad, where he was a two-time 3A state champion in the 100 and 200 meters. In 2004, Mays earned Student Sports Junior All-American honors while posting 89 tackles, five interceptions, and five pass deflections defensively, with 614 yards and seven touch-downs on 25 receptions (20.6 avg) on offense. He also returned twelve punts for 392 yards (32.7 avg) and three touchdowns.