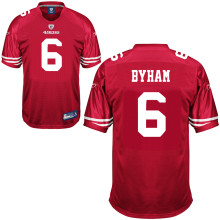 With the 182nd pick, the San Francisco 49ers selected Nate Byham, TE, Pittsburgh. Here's what Mocking the Draft had to say about him:

Strengths: Byham is arguably the best blocking tight end in this year's draft. He's powerful playing in line and doesn't need help blockers. Smooth moving to the second level to attack linebackers. He has surprisingly soft hands and can make tough catches. He's hard to take down in the open field once he gets his momentum going. Good size and length.

Weaknesses: What keeps Byham likely in the third day of the draft is his lack of athleticism. He's pretty slow and doesn't release especially well. Doesn't get separation and need to use his body to get open. Doesn't have the best agility to make defenders miss in hte open.

Final word: Byham should have a good NFL career, but he's not a spectacular player. He's a good blocker with strength. But his receiving skills are only average.

The 49ers sounded like they wanted to add a blocking tight end and here he is.