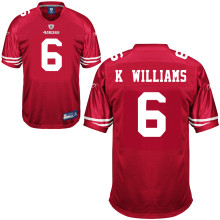 With the 206th pick of the 2010 NFL Draft, the San Francisco 49ers drafted Kyle Williams, WR, Arizona State. Here is his scouting report from nfl.com:

Williams is an undersized wide receiver with good punt-return skills and excellent vertical speed but is very raw when it comes to the finer points of running routes, reading coverages and setting defenders up. He gets to top speed quickly but can struggle trying to get off the line against a good press corner. He tends to telegraph his routes and will round off his breaks on hard cuts, but he has the tools to improve with good coaching. He definitely has something that can't be coached, and that is speed, which will cause teams to want to jump on him earlier than his production and skill level would dictate.