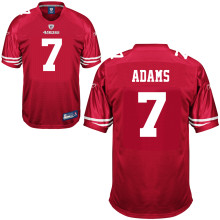 With the 224th pick of the NFL Draft, the San Francisco 49ers selected Phillip Adams, a cornerback out of South Carolina State. I can't find much in the way of a scouting report, which probably isn't a good thing. More to come when I can find it.

CalCalender has provided some info from this link:

Adams said that after overcoming the big-school snub, his first clue that he might have a future in the game came when his coaches moved him from safety after his freshman year. That's when things began to blossom for him, and he's continued to prove himself over the years.

"I think when they moved me to corner, that really made me feel like I could play at the next level," Adams said. "When the coaches said something to me about it, I was skeptical at first, because I felt pretty comfortable playing safety. But after I got in there, I got to a point I felt like I could cover anybody."

At 5-foot-11, 192 pounds, he's solidly built and not afraid to tackle. He's also shown a strong instinct for the ball, with 11 interceptions in four years, two of those returned for touchdowns.

After the season, he was invited to play in a pair of postseason all-star games, the HBCU Senior Bowl and the Texas vs. The Nation game.

There, he impressed NFL scouts with his ability to play press coverage, one of the biggest demands when any college player moves up a level.