Where Are They Now: The Coaches, Part 2

Share All sharing options for: Where Are They Now: The Coaches, Part 2

At this stage of the game these posts are more of a "Who were they and what did they do?" rather than a "Where Are They Now?" kind of thing. Some of these coaches have barely any information about them, and it will get worse the further back we go. I'm basically going to do a bit of a biographical sketch, highlighting any unusual or interesting things that I find, and then as much detail as I can find about what they did after their stint with the 49ers.

I'm jumping straight to the 1970s because we only had 3 coaches from 1979 to 2002. We've already talked about Steve Mariucci in the last one. You can't really talk about George Siefert without bringing up Bill Walsh and I don't feel comfortable talking about Bill Walsh as there has already been volumes of information printed about him. I particularly recommend The Genius: How Bill Walsh Reinvented Football and Created an NFL Dynasty. It's less than $4.00 at Amazon and is a great read if you want to know more about Walsh and what he did for the 49ers.

The 1970s were a bad decade for the 49ers. We had six head coaches during that time frame, a record of 58-82, three playoff appearances, two NFC championship appearances, and no championship victories, as well as one coach of the year winner.

Dick Nolan played nine years in the NFL as a DB and safety. It was while playing with the Giants that Nolan met Landry, a fellow player. Landry became a head coach of the Cowboys in 1960, and when Nolan retired from football in 1962, Landry hired Nolan as an assistant coach. In 1968 the 49ers hired him as head coach.

The chemistry began to change when Dick Nolan showed up," former 49ers quarterback John Brodie said in a statement released by the team. "He was as tough as any man I've ever known . . .

His first couple of seasons were not very impressive, but in 1970 the 49ers would go 10-3-1 to clinch their first NFC West title, which would be followed with two more in a row. The team was built on a strong defense that would feature a couple of future Hall of Famers. The NFC championship game was played at Kezar Stadium (the last game played there), and the 49ers lost to the Cowboys 17-10.

Dick was a defensive strategist," said Dave Wilcox (HOF outside linebacker) in a statement released by the 49ers. "He changed the attitude of the 49ers from what had been going on there for a while.

After the Saints fired him he was hired to be the defensive coordinator of the Oilers for a year, and then a Cowboys defensive assistant from 1982 to 1990. In the late 90s he would develop dementia and would eventually be diagnosed with Alzheimer's, passing away in 2007. 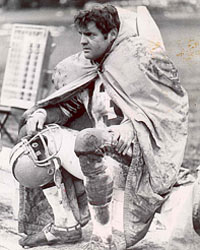 Monte Clark would inherit the 49ers for just one season. He was actually drafted by the 49ers in the 1958 draft and played for three years as a defensive and offensive tackle. He would be dealt to the Cowboys for one year and then to the Browns where he would play right tackle until his retirement in 1969. In 1970 he was hired as the Dolphins offensive line coach under Don Shula. He was there for six years, including the final two as offensive coordinator. During that time he received several offers to coach other teams, but finally settled on the 49ers.

He was officially hired Jan 13, 1976, and would assume both GM and head coach roles. One of his first moves was to bring in quarterback Jim Plunkett, a former #1 pick. Plunkett was on the downside of his career but the thinking in the league was that he had a couple of good years left, and he led the 49ers to a great 6-0 start before losing a tough game in overtime, starting a tailspin that would end with an 8-6 overall record.

Clark was hired by the Lions to be their new head coach and started with them the 1978 season. He would be their head coach until 1984, taking them to two playoff games and posting an overall record of 43-61-1.

Clark would stay out of football for five years, before tossing his hat back in the ring as the Dolphin director of player personnel in 1990. He also coached offensive line at Stanford for two seasons (1993-1994), rejoining the Dolphins again in 1995 for one season as offensive line coach. In 1999 he was hired by the Detroit Lions as a special consultant, a role he would keep until his death last year from liver disease.

Meyer does not have the shortest stint as 49er head coach but he comes close, which is a shame because he coached for a very long time and was actually a very influential coach for a great many players. Meyer graduated high school in 1943 and immediately joined the Air Force. He would fly 25 missions as a B-17 bombardier. After his release from the Air Force he decided to go back to school and choice Denison University in Ohio, a team coached by Woody Hayes. He would play QB for Hayes and set several team records.

After his graduation he would be an assistant coach at Denison for five years and Wake Forest for three years. He eventually found himself coaching at Alabama under Bear Bryant where he would develop Joe Namath and Ken Stabler into stars. When Nolan was hired as head coach of the 49ers he lured Meyer to the team. Meyer would only stay there for one year before moving on to be QB coach for the Jets from 1969 to 1973. The Rams hired him as offensive coordinator and he would stay in that role until 1977 when the 49ers hired him to replace Monte Clark.

He wouldn't last long as a 49er head coach though, going 5-9 in his first year and being let go at the end of the season.

Now he actually coaches club teams in Finland, Germany and Italy, a gig he landed in 1991 when Finland asked him to come and hold a QB clinic. He says he would jump at the opportunity to return to the NFL if one ever came his way.

In a recent interview with the Gadsen Times, he was asked if he ever thought about going back to the NFL.

"You bet," he said, quickly, with a smile that told the whole story. He has always loved football, and always will.

"I never thought of doing anything else, except coaching football," he said.

One interesting side note--Jimmy Raye was a WR coach for Meyer during Meyer's single season with the team.

Poor Pete McCulley. He was brought into an impossible situation. A career assistant he'd never held a head coaching job at any level when Thomas hired him to be the head coach of the 49ers. To make things worse McCulley came to the team with a roster that started eight rookies. Thomas also gave up the 1979 first round pick to acquire OJ Simpson who would go on to rush for just under 600 yards on the season. Steve DeBerg was the QB for the Niners for most of the season. After a 1-8 record McCulley would be fired.

From 1982 to 1987 McCulley was QB coach for the Kansas City Chiefs. After the 1986 season which saw the Chiefs with the lowest total offense in the NFL he was let go along with two other assistant coaches.

O'Connor was thrust into the same horrible situation that McCulley had faced and didn't do any better, leading the Niners to a 1-9 record. Just like McCulley he had never held a head coaching job, but had spent his entire career as an assistant. (I believe this was deliberate--Thomas wanted control, and didn't want any experienced coaches who could stand up to him). Before the 49ers O'Connor had been a QB coach and offensive coordinator for several colleges, including Villanova and Maryland. He was the QB coach for the Chicago Bears from 1975-1977 (who hires a QB coach to be a head coach of an NFL team?).

After being fired at the conclusion of the 1978 season he was picked up by the Redskins to be their RB coach, which he did until 1980. In 1981 he was hired by the Montreal Alouettes of the CFL to be their offensive coordinator. In 1984 he accepted a position as Athletic Director and Head Football Coach of the Catholic University of America, a position he would hold until 1990. Since 2000 he has been with Florida Atlantic University in many roles, including QB coach, assistant coach, and as needed RB coach and WR coach.