After a bit of a break due to slight negligence on my part and also the NFL Draft, it's time for me to continue my weekly blog spotlight with your swing around SBNation. I should be back on these throughout the rest of the offseason, or whenever Fooch pulls the plug on me.

SBNation reports that it has 252 blogs currently, and I know there's at least a few more beyond that which aren't listen yet. I don't really have 252 additions of this planned, you see, plus I don't think anybody here wants an in depth look at the Raiders blog, the Packers blog... things of that nature. But it's impressive, isn't it?  Not even factoring in the community that's still at least 252 people on our network dedicated to sports writing.

Last time I did this I took a look at Fake Teams. The weeks prior I looked at Ridiculous Upside, The Daily Forehand, Mocking the Draft and Inhistoric. Today I went with two blogs, both centering on the same thing with their own styles. Boxing blogs Bad Left Hook and The Boxing Bulletin. 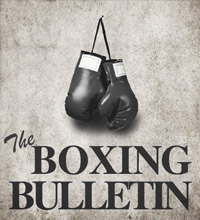 So hopefully all of that formatted correctly and you're not looking at a horrific, failed HTML attempt above. Either way I'm not doing it again so you get what you get! Bad Left Hook and The Boxing Bulletin are both blogs on our little network that are focused on the hugely popular sport of boxing.

And from what I can see, they're great blogs. They both have a good-sized community and both offer unique coverage. If Bad Left Hook doesn't have something, then The Boxing Bulletin will,and vice-versa. I've only been looking into them for about a day now (didn't quite know when I was going to get back to doing these posts) but if there was a time to check them out, it would be now.

I'm not an avid boxing fan, but there is a fairly big fight tonight. Floyd Mayweather vs Shane Mosley, a fight which I'll be watching. As most of you know, I'm a big MMA fan, this is actually going to be my first boxing event I order myself and watch all the way through. I want to get into the sport, seeing as how after I linked to the MMA blog in one of my first Saturday Swings, I found that there were a couple of you here who are into boxing.

So while I can't talk a whole lot of in-depth about these blogs, I know they are well respected around the internet and have content coming in daily. They cover just about everything boxing, from the big hype-fests of fights to some of the very small promotions with live blogs, previews and open threads. It's worth heading over and checking both of them out, joining, seeing which one suits you best, and keeping it as your source of boxing coverage and community on the web. So check out Bad Left Hook and The Boxing Bulletin, and enjoy your lunch!