A not so Family Feud

Share All sharing options for: A not so Family Feud

This week the NFL Network has been re-airing some great documentaries on big high school rivalries in the country. Last week they featured the Jenks/Union rivalry (which brings upwards of 30,000 fans to their games). (My wife attended Jenks High School before moving to Idaho). This week it was Pahokee vs Glade Central.

That sparked memories of my own high school playing days. I thought I'd do something a little different and take a trip down memory lane with you.

I grew up in Shelley, Idaho (pop 3500 when I lived there). Our biggest rivals were the Firth Cougars (six miles down the road). The population of the city was only about 400, but the high school serviced most of the county. The high school enrolled about 300-350 students (my high school had about 400-450 students in any given year) They were in a different class than we were so the game didn't have any playoff implications but it was widely regarded as the most important game of the season. Whenever we played (which was usually in October) the games would be sold out, which meant that there would be about 2,000 people watching.

This year the game was played in FIrth, which has no stadium just a few rows of bleachers and all the standing room you could ask for. 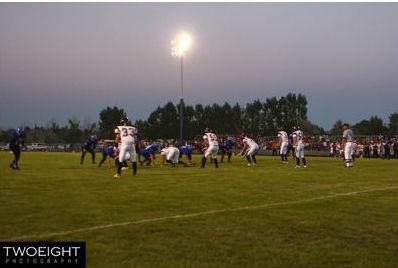 Not a huge fan of the new uniforms. When I played the red was much darker. The home uniforms are now white and red which I think is horrible (we had black and red for away games and red and black for home). 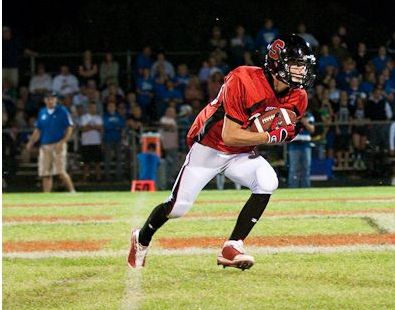 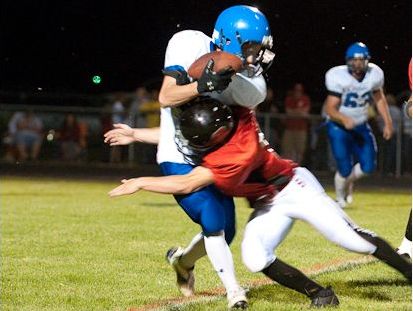 I have to give a shout out to my high school which went 12-0 last season and secured another state championship. The senior QB played the championship game with a dislocated shoulder. 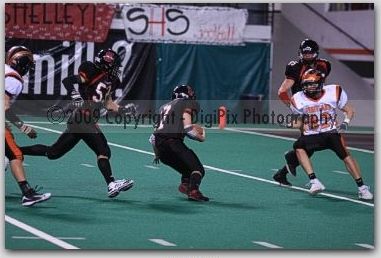 Join me after the jump as we look at a few other notable high school rivalries.

Idaho Falls vs Skyline aka The Emotion Bowl

Played in Idaho Falls at the Ravsten stadium (named after a former coach of both teams), this rivalry is dubbed the Emotion Bowl and is a huge deal for the town of 50,000 (and part of the Great American Rivalry series). The rivalry started in 1968 when Skyline High School was split from Idaho Falls High School. To save costs the city decided to use just the one stadium (which can seat 6,000+), so the schools share the stadium during football and track seasons.

The game is standing room only, and the winners get to paint the goalposts in their school's color. Last year there were more than 6,000 in attendance. Since it's played in mid to late October it's always cold, and we often see snow. I live a block from the stadium and attend every year. To me this rivalry epitomizes the best things about high school football.

This year the Skyline Grizzlies were the #2 ranked team in the state and were 5-0 heading into the game. Their overall record in the game had been 25-19, so they had a slight edge and most people thought they would win. Their rivals were a paltry 2-3 and were expected to be blown out. The Tigers won handily, 28-13 on a strong performance by their Senior QB. 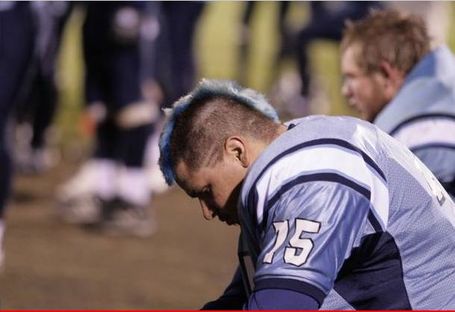 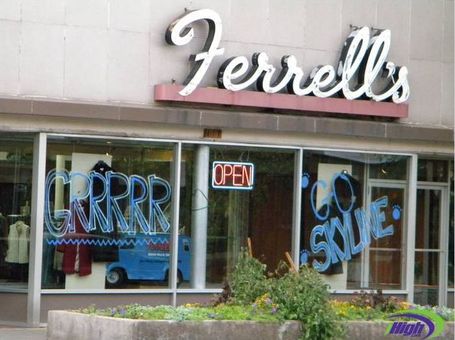 Jenks vs Union aka The Backyard Bowl

This is a huge football rivalry in the city of Tulsa, Oklahoma. These two teams are perennial powerhouses and send players off to college regulary. This year two of their players made it to the NFL. These were CB Dominique Franks (we had lots of talk about him here at Niners Nation) who got picked in the 5th round by the Atlanta Falcons, and LB Phillip Dillard who was picked in the 4th round by the Giants. Franks attended Union High School and Dillard attended Jenks.

This rivalry is a touch bigger than the Emotion Bowl rivalry, but not by much (I kid, I kid). The game is normally played at Chapman stadium (home to the University of Tulsa) and draws 20,000+ regularly. The maximum attendance for this game was 40,035. 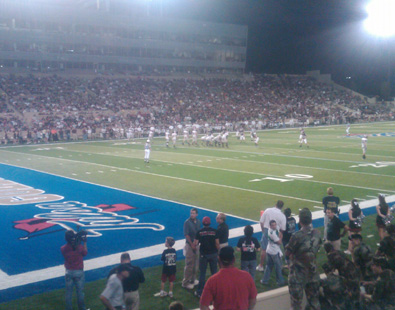 How good are these two teams? Since 1996 no other team has won a state championship--it's been either Jenks or Union. Part of that is due to the size of their respective schools. Union's enrollment last year was just over 4300, while Jenks' enrollment was 2903. A bigger part of their success is their coaching, and the fact that they've developed feeder programs. Basically every youth football team in Tulsa runs one or the other of the high school's offenses, so by the time the kids are ready to play high school ball they know the system inside and out.

This year Jenks would come into the game ranked #2 in the state whilst Union would come in ranked #1 overall. Attendance at the game was 18,753. Union led for most of the game but the Jenks team refused to die, mounting a 4th quarter rally that fell just short. The final score was 27-25.

Union would end up ranked #6 in the Nation by USA Today and Jenks would be ranked #21--pretty impressive I'd say. 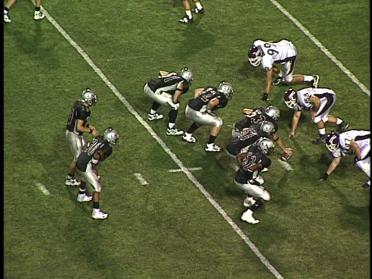 Union runs away with the game 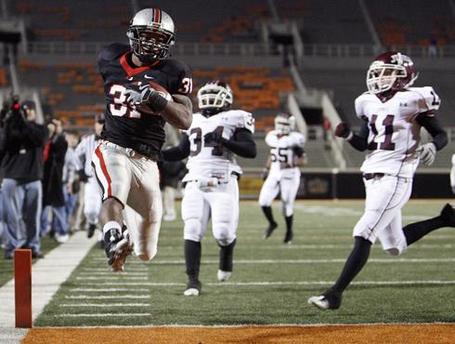 No nickname needed for this one. The two Ohio communities are only 7 miles apart (all the best rivalries come from teams in the same town or just down the road). The teams have been playing since 1894. That's just incredible. Massilion holds the edge in this one with an overall record of 63-50-5.

Things that make this rivalry unique--the obvious one is the age. The second is that it's always played on a Saturday afternoon, and it's always the last game played during the regular season. This gives the communities plenty of time to hype the game, and hype it they do. Las Vegas even gets in on the action--supposedly this is the only high school rivalry in the country that gets a betting line. Highschoolrivals.com ranks this game as the number one rivalry in the country. At the Massilon Hospital newborn boys are actually given footballs when they're born.

The game is played at Fawcett Stadium (which is also the stadium that hosts the Pro Football Hall of Fame game), and like the Backyard Bowl can regularly draw 20,000 spectators.

This year the Masillion Tigers beat the McKinley Bulldogs by a score of 10-7. 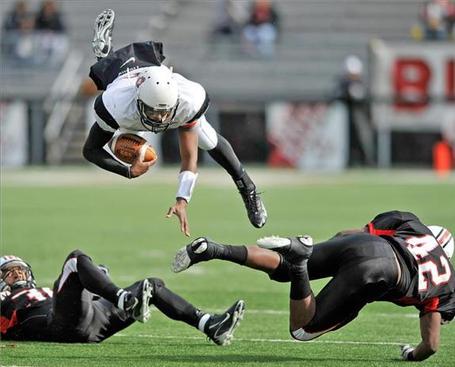 Make sure to catch the ball before running with it! 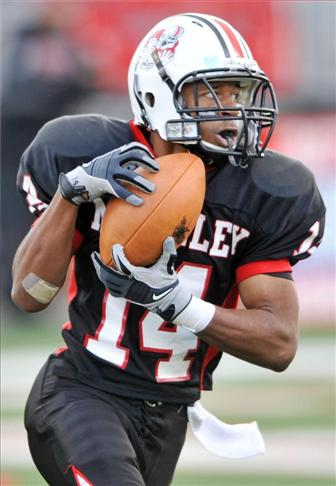 (These photos were swiped from CoachesAid.com which has a breakdown of every single game played in this series.)

Great article from NPR about the rivalry