The Greatest Rivalries in the NFL: 49ers--Cowboys

Share All sharing options for: The Greatest Rivalries in the NFL: 49ers--Cowboys

My story on high school football rivalries was so much fun to write that I thought i'd make it a regular feature during this off-season, though rather than have it be about high school, or even college ball I thought I'd make it about the NFL.

One of the great aspects of the NFL is the rivalries that develop between teams and fans. There are some great ones too--Browns vs Bengals, Raiders vs Broncos (especially in the 80s when Elway was playing), Jets vs Dolphins, Redskins vs Eagles, Pats vs Colts. Some teams have more than one rivalry they've been involved with. The Eagles are such a team. The Niners had a rivalry with the Rams for a very long time, though not so much anymore. Their rivalry with the Giants during the Parcells era was stuff of legend as well.

However the most storied rivalry of them all (from a completely unbiased perspective of course), is that of the 49ers vs the Cowboys. For 30+ years these two teams have battled for the NFC championship and a trip to the Superbowl. We've raided each other's rosters and have sent half a dozen players to the Hall of Fame between us.

Over the years the Cowboys and 49ers have faced off 31 times. The Niners hold the edge with a 16-14-1 record in the series.

This series actually started way back in 1960. Since then the two teams have met in the playoffs six times, where the Cowboys hold the edge 4-2.

The most famous game of this series is probably the 1981 NFC championship. The Niners were hosting it that year. In front of a sold out crowd the two teams battled back and forth, with the Cowboy's withering defense wrecking havoc on th 49ers offensive line. With 4:54 left in the 4th quarter the 49ers had the ball on their own 11 yard line and were down 27-21. Joe Montana engineered an 89 yard, 12 play drive to put the 49ers up 28-27. The final play happened from the Cowboys six yard line.

The beginning of the drive got off to a bad start with a poor throw and an incomplete pass. LenDale Elliot than ran up the middle for 6 yards on a draw. On 3rd down and 4 Montana drops back and fires to Solomon who catches it for a first down at the 23 yard mark. Next play was a running play to RB Lenvil Elliot who gained 11 yards on a scamper around the right side.

Everybody was expecting the Niners to pass, including the announcers. When Walsh saw the Cowboys put in their Nickel defense he saw an opportunity to run it and he took advantage of that. The final drive was almost evenly split between pass and run, including a surprise reverse on a crucial down.

On the final series of plays the 49ers had 1st and 10 on the Cowboys 13 yard line. The first play Montana missed a wide open Solomon in the end zone. The second play was an end around that netted 8 yards. The final play took place from the 5 yard line. Montana rolls right and has a tough time finding someone open. He had defenders all over his face and then threw a high pass in the back of the endzone that Clark caught.

There was still more to come though. The Cowboys had 51 seconds to drive down the field to within field goal range, and they had the weapons to do it. The game saving moment came on a shoulder collar by Eric Wright on a Drew Pearson catch. Had Wright not made that grab it's quite possible that Pearson waltzes into the endzone.

Also, if Clark had missed that catch (which at first blush appears to be a thrown away ball by Montana) Montana's legacy and the 49er legacy might be completely different.

To give you an idea of how epic this rivalry of the 1980s was.

There are four Cowboys from that 1981 team enshrined in the Hall of Fame. There are three 49ers from that team. Both head coaches are in the HOF.

Here's a bit of a different view of "The Catch" than what we normally see. 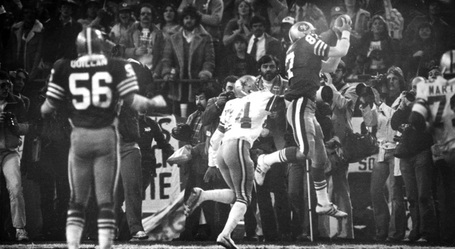 For your viewing pleasure two clips from YouTube showing the final drive.