Last Saturday I took a look at a blog on minor league baseball called.. well.. Minor League Ball. The week before that, I covered Blog Huddle, the official State of SB Nation blog in this post. In the latter post, I linked to all of my previous 'Swings, so go ahead and check that out if you want to see 'em.

I've also made it a goal to visit all 254+ sports blogs here on SB Nation and contribute some form of posting at least once. It's not a part of this series of posts, but I felt like noting that and maybe I might touch up on it a bit in the future. I just want to experience all of them a little more than just examining from the sidelines like I do for these Swings.

Today I'll be looking at NASCAR Ranting and Raving. If you didn't figure as much, it's our resident NASCAR blog. 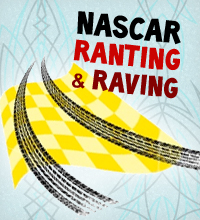 The sport of NASCAR has been a guilty pleasure of mine for years now. It's kind of an anomaly. Almost everyone gets into any one sport through someone else, but nobody I know enjoys it at all. Nobody in my family, and not a single friend of mine could name off any drivers outside of the usual suspects of Jeff Gordon or Dale Earnhardt. I just flipped through the channels and came across it. So I sat and watched. There wasn't even a crash in the time which I was watching that first race. I just enjoyed it.

I know a lot of people that would contend that it isn't a sport, but I laugh at those people. No really, I'm laughing right now just thinking about it. But the validity of the sport in those peoples' eyes doesn't affect this blog, which steamrolls ahead with the same line of thought that I share.

For those of you who do think it's a sport, I highly recommend this blog. They cover everything Nascar, they have a large amount of links to other sites (aww yeeeah, Niners Nation is on the list of top football blogs!) and their own coverage is top notch. I wish I had given this blog a longer look but I was running out of time when I started this. I guess the fact that I know it's a great blog made it a much easier choice for a fall back option. I could then recommend it to you without using it that much or saying a whole lot and be confident I didn't lead you astray.

Anything you can find at any of the bigger NASCAR sites you can find there. Coverage of every race, exclusive interviews, driver access, things of that nature. It's all there, and it's all prompt. They have an excellent team of front page writers and contributors, and a large enough readerbase to keep discussion-worthy topics.. well.. full of discussion. It's just a great blog run by some good guys and if you're a fan of NASCAR there is literally no reason for you to be going anywhere else for your coverage. Seriously. Go now.