Hoosiers remains one of my all time favorite sports movies, ranking just below Rudy (which was written by the same guys who did Hoosiers) and Remember the Titans for me. It was a risk making the movie.

They needn't have worried. Hoosiers is very nearly the perfect sports movie. Yeah it's your typical David vs Goliath but it never feels cliched (though that whole romance thing with Gene Hackman was just weird), but best of all it's based on real events (the best sports movies are).

Of course like most movies based on actual events it's only loosely based on real events.

The movie follows the fortunes of Hickory High School (only 64 boys) as they compete for the Indiana state basketball trophy at a time when every high school, regardless of size, competed in the same class.

I have three favorite scenes from the movie. The first is when Hackman deliberately gets himself thrown out of the game so that Hopper can come in and finish coaching. The second is when the team arrives in the big city and they measure the court to show that a basketball court is still a basketball court, even if it's in a big city, and the third is the montage of the town loading up in their cars to follow the team around.

Join me after the jump as we separate more fact from fiction.

The movie is based on the story of the Milan High School who won the 1954 high school state basketball tournament. A couple of things were the same. The Milan High School team played the state championship in the Hinkle Field House, which is where the movie set the final climatic scene. 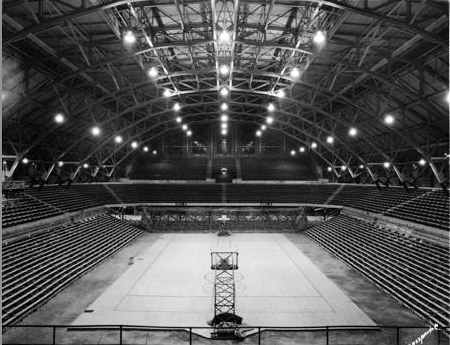 The movie depicts the Milan team as being huge underdogs. Granted they were a small school, going against a much bigger team, but they were actually one of the favorites since they had made it to the state semi-finals the year before and were returning four starters.

There was no coaching controversy with the new coach. The previous coach Herman "Snort" Grimstead (why don't players and coaches have cool nicknames like that anymore) was fired after the 1951 season for ordering new uniforms without the superintendent's permission. The new coach, Marvin Wood, made a couple of waves initially, but after his successful first year he had no problems.

Milan cruised through the tournament, winning by double digits in every game, where in the movie nearly every game came down to the wire.

Of the 73 boys enrolled at Milan, a full 58 of them tried out for the team which fielded a roster of 10 players. The town drunk had no real counterpart (which is a shame because that's one of my favorite subplots),

The coaches were completely different as well. Gene Hackman plays the coach who's got a bit of a shady past and a temper. Marvin Woods was only 26 when he was hired, had a wife and kids, was soft spoken and practiced right along with his players.

The final game was not played against a predominantly black team, though the semi-final was. The semi-final game was played against Crispus Attucks which was an all-black school. There's even a connection there in the movie. Ray Crowe, who played the part of the coach of the South Bend school (the state finals) actually coached the Crispus Attucks team in 1954 when they lost to Milan. The following year Crowe would coach his team to a state championship.

During the final game the production team had trouble filling a stadium with extras, even after inviting people to show up. They arrived at a creative solution when they invited two local high schools to play their games at the fieldhouse, and then shot crowd scenes from those games.

One final tidbit. Brian Billick names this as his all-time favorite sports movie.

Anyone who coached any sport has to love that movie because it shows a man, who first of all, loves coaching, and secondly, understands that leadership is not a popularity contest. He has his beliefs about how the game should be played, how players should be treated, and he is very consistent. If he fails, he fails, but he will do it his way. It's a beautiful thing when you see his players buy into his program. That's what every coach strives for because that's when you know you have a chance to win.