It's about lunchtime (for me at least, don't know about you) and last I checked it's Saturday, which means it's time for another Saturday Swing around SBNation. In case you're wondering, I'm on these the rest of the offseason as far as I know.

So last week I took a look at Bad Left Hook and The Boxing Bulletin, two fantastic blogs that jointly provided SBNation's boxing coverage. Before that I took a look at such sites as Inhistoric and Ridiculous Upside. I'm thinking next week I will link to all of my previous swing's around our little (not really) blog network here.

This week I take a look at SBNation's soccer coverage, mainly looking at a very good blog: Daily Soccer Fix. So make the jump and I'll fill you in on all you need to know about soccer on SBNation. 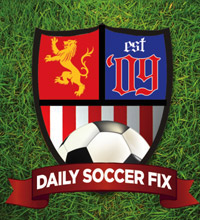 Next month the 2010 World Cup begins. Throughout the year, Daily Soccer Fix covers all aspects of soccer within the US--the MLS and anything pertaining to the US' World Cup team. It seems like the last few weeks each sport I've covered I've expressed that I'm not big on it, but I'd like to be.Soccer is no exception, be it national or international--and I will be following, for the first time, the World Cup this year.

SBNation has a blog dedicated to solely international soccer, but at least for the time being (as I understand it) they have moved to the default SBNation soccer coverage page  for the duration of the World Cup, a page that can be found here.

The editor, Steve Davis, writes for SI.com as well, and looking through some archived articles it's definitely good stuff. Daily Soccer Fix deserves a bigger community than it has, so when you get set for the World Cup, be sure to head over there for coverage focusing primarily on the US and check out SBNation's main soccer page for full coverage. Don't forget about the MLS either, there's plenty of good coverage to be had. Check it out, soccer fans.

And yes, Niners Nation, LondonNiner is paying me a wealthy sum to advertise his existence in as many front page posts as I can.