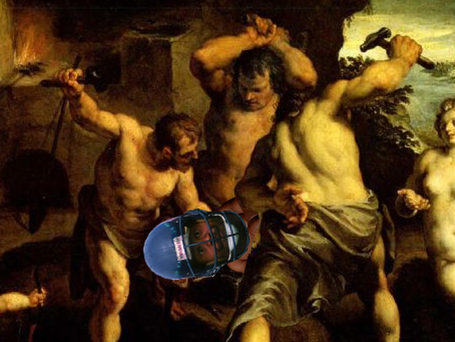 It had been 3000 years since the last true hero had walked the earth, but the Gods were ready to be heard from once more. Zeus summoned Vulcan, Hermes, Hades and Ares and laid forth is command:

"The world needs a great hero, one who will deliver great championships, first to just a windy sinkhole that nobody really cares about, but later he will lead the football team of the gods to victory!

"Vulcan you must oversee the Forging of this great hero, cast him of Iron and Gold that he may be strong but also have some bling. Hermes, you must make him fast enough to snatch a man's heart before it's last beat. Hades, you must give him a persona of fear that his opponents will shrivel and cry to their mommies when his mere name is mentioned and Ares you must make him battle ready and Fyisical (with and F).