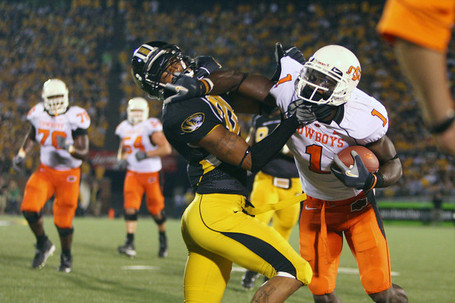 Jason LaConfora broke the news (via twitter) that Dez Bryan has just signed a deal with the Dallas Cowboys. Adam Schefter is reporting that the deal is a 5 year, $11.8 million deal that includes $8.5 million in guaranteed money. As a comparison last year's 24th overall pick was DL Peria Jerry. His rookie deal was 5 years, $10.35 million with $7.55 million guaranteed. Looks to be about a 10% increase this year over last.

Colt McCoy has also signed a four year deal that could be worth up to $5 million.

I'm bumping this post to the front page since it's excellent information regarding most of the rest of the picks.

Bradford's agents begun negotiations last week for his deal. I suspect that the 49ers have had contract talks with Rosenhaus for Anthony Davis when Rosenhaus visited the front office last week. Joe Haden better get cracking on a deal if he wants to make it to the Brown's training camp which starts this week.

Since no one else is tackling the subject, I am going to self-designate and step up to take care of it. There hasn't been much going on around the league. In fact, it's been downright boring these last few weeks! But there has been some movement on the rookie front.

In my prior post on the subject I covered the status as of 7/13 and I speculated on the estimated contracts that our top 3 picks will receive. Feel free to check out that FanPost for the numbers and logic.

After the jump, an update on things around the NFL in regards to the status of rookie signings....

As it stands right now (12:33pm Texas time, 7/22), 168 of 257 2010 draft picks have either signed their contracts or agreed to terms. As expected, the flurry started at the lower end picks and is working its way up into the upper rounds. It's obviously easier to get a lower-round pick to sign, since most of them are just happy to be in the NFL at all.

Currently, the highest pick to sign or agree to terms is pick #35, Brian Price, DT, UCLA signed with Tampa for 4yrs, $5.32mm. Coupling this contract to the calculations I made int he prior post, I think I was pretty close on what we can expect for Taylor Mays - about 4years, $4mill or so...

Everyone around the league - and I am sure the 49ers front office especially - is watching for what happens with Sam Bradford (#1 overall pick to the St. Louis Rams). According to NFL.com, the Rams are confident they'll get their deal done in time to have Bradford in camp. That means there will be a whirlwind of activity here shortly as other teams look to sign their 1st and 2nd-rounders, slotting off Bradford's deal. Obviously, he's got the QB premium, but his contract will still serve as the benchmark for all the others.

According to FoxSports.com it's going to be somewhere around the $50million mark. They arrive at that number in a similar fashion that I arrived at my estimates: take a look at history and calculate the inflation rate year-over-year. In 2008, Matt Ryan (#1 QB, #3 overall) got about $35mill. In 2009, Matthew Stafford (#1 overall) received about $42million in "guaranteed" money, a 20% increase. Using that number, Fox Sports says "It's difficult to imagine Bradford not receiving between $45 and $50 million "guaranteed" " I tend to agree with that.

I will keep everyone posted as things develop or, if you prefer to avoid my commentary, you can check out the updates for yourself.

Looks like the signings are going to come fast and furious over the next couple of weeks. Since my original post, we’ve had 4 more 2nd-rounders sign and a slew of other lower-round picks. Talks have begun with many (if not most) of the 1st-rounders, so I’m sure we’ll see something pop soon enough.

Who will be the next 1st round pick to sign