Concussions and the NFL

Share All sharing options for: Concussions and the NFL

How serious is the issue of concussion related brain damage? In 2008 the NFL asked the University of Michigan's Institute for Social Research to conduct a survey of over 1,000 retired NFL players. (To participate in the program a player had to have played for at least three years.) The study used the National Health Institute's survey (which is a broad questionaire put together by the government to collect data on health issues across the country). Their findings are startling.

As you'd expect some issues were present among retirees at normal rates (kidneys, prostate, etc.), a few higher (sleep apnea, high cholestrol), and some lower (heart attacks, ulcers). Those aren't too surprising. The shocking news coame when the team asked about dementia, specifically "Have you ever been diagnosed with dementia, Alzheimer's disease, or other memory-related diseases".

6.1% of players 50 and above reported yes. To understand how shocking this, normal rates for this question in the US are 1.2% of the population that's 50 and above. Players 30 through 49 were at 1.9%, which is 19 times the national average. That's shocking.

Sadly I suspect that the number of cases diagnosed are under-reported.

George Visger played defensive line for the 49ers. He suffered his first concussion in the 9th grade. During one regular season game Visger was struck violently in the "ear hole" (side of the helmet) by a Cowboys offensive lineman. Visger played the rest of the game but can't remember a bit of it because of the concussion he suffered. Trainers told him later that they broke 25-30 smelling-salt capsules under his nose to keep him in the game. Now he has no short-term memory at all. He's a living example of the movie Memento and has to write everything down or he won't remember it. He has impulse control issues which cause him to blow up violently at his family for no reason.

Sound familiar? It should, there are literally dozens of individual anecdotes like this one.

They AP conducted a survey about attitudes towards concussions. They interviewed 5 players from every team to get a good cross section of the league, nearly 10%. Of these 160 respondents a full 30 said they had downplayed or hidden the severity of a concussion.

Washington Redskins kick returner Rock Cartwright remembers his brain "shaking like a bell" when he was walloped in a game against the New York Giants a few years ago.

"You know how a bell vibrates? That's how my brain was going at that time," he said. "I think five minutes later, I came back to myself. I went back out there and played football."

The NFL's data shows 1 reported concussion every other game (120 to 130 per year). This survey suggests that the rate of concussions might be closer to 1 per game or more. The NFL has begun putting a serious emphasis on concussions, but not many players are going to be willing to go talk to a coach or trainer, even if they knew what to look for.

When players pride themselves on being "warriors" and "gladiators", it's tough to admit that you're woozy and want to sit out. Just last year Been Roethlisberger got ripped apart by his teammate Hines Ward for sitting out a game due to a concussion he'd suffered earlier. The pressures involved for "bubble" players or guys trying to break into the starting lineup are even worse.

So having said all of that, what exactly is a concussion?

At it's most basic a concussion is a bruise of the brain. Inside the skull there's a layer of fluid between the brain and the skull. This fluid acts as a cushion against any jarring movements. If the movement is too violent the brain can hit the skull with enough force to cause damage.

Obviously any major head trauma (the kind that occurs in football daily) can cause this. What's not well-known is that you don't have to get hit on the head to get a concussion. Any sudden movement of your head off it's axis can cause it. For example, if you're in a car accident and your head and neck snap forward violently, that could cause a concussion. 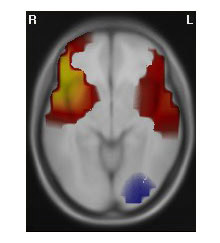 Here we have a 3d model of a damaged brain caused by a concussion. The red areas show parts of the brain that are over-active, the blue parts that are under-active. The symptoms of concussions are varied but usually fall under one of four categories:

Obviously not all of these can be diagnosed on the sidelines, but a coach or trainer should be able to spot when someone is dizzy or has blurred vision. They should also be able to determine if a player has impaired mental facilities. Once it's been determined that a player has a concussion the NFL has put in new guidelines regarding when a player can return.

I think that's a great step in the right direction, however I don't think it's enough. Coaches are going to be busy on the sidelines, and trainers might not feel comfortable bringing it to the attention of the head doctors. Personally I think the best solution is to have team doctors that are hired by the NFL and that report directly to the NFL. This would eliminate an inherent conflict of interest that happens when the doctor works for the team. It also has the benefits of allowing for more accurate reporting of data as well as standardization of those reports.

The NFL is slowly moving the right direction here. For the longest time they head their collective heads in the sand regarding brain trauma links and football. Some of the new rules are great in protecting player's safety, but there's still much more to be done.