A day late and a dollar short on the Caption This! this week. To everyone who was expecting to see this on Friday, I apologize. I had an internal clock error which caused me to somehow ignore all external clocks. But Saturday isn't so bad. It's just one day late.

And, actually, now that I think about it I still have my dollar.

In any case, last week's "make fun of Alex Smith and Jimmy Raye" Caption This! worked so well as a reverse jinx that I seriously considered giving it another week to propel us to victory against the Chiefs. My reasons for not doing this are two-fold: 1) I only believe in jinxes as long as they are convenient, and 2) It would be inconvenient for me to not be able to use this picture of Jerry Rice.

This week's picture is a bit of a change of pace. The Caption This! picture is usually good for a hearty mocking. In this case, though, I don't think it's possible to mock the G.O.A.T. Sure, he's wearing a ridiculous red and gold coat (also: ridiculously awesome - please send one of those my way, Jerry). Sure, he's throwing up fake gang signs. Sure, he's leaning back like Fat Joe taught him the proper technique. Sure, that guy in the background has more chins than I do. But for all of those things that would normally call for a good verbal thrashing on their own, there is absolutely nothing to make fun of in this picture.

It's just too damn cool.

But that doesn't mean we can't have fun with it. I, for one, believe that this picture is ripe for a wide range of awesome captions. So, you know, enjoy. Use the comments to provide your captions. Rec' the ones you like the most. 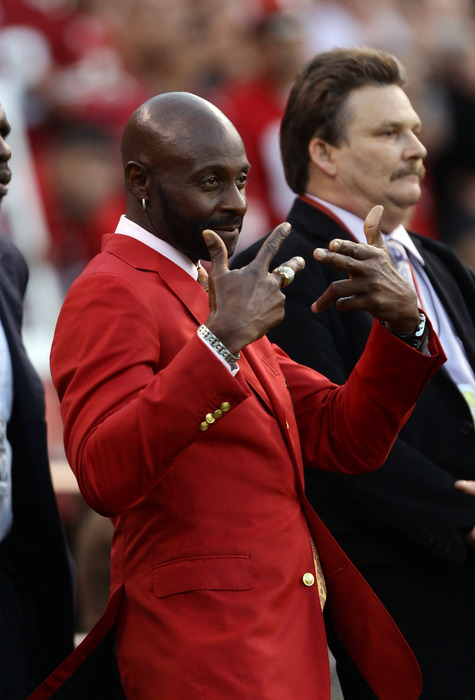