The 49ers signed Brett Swain yesterday as a replacement for Joshua Morgan's active roster spot. Swain will not really replace Morgan's role in the offense as Ted Ginn Jr. and Kyle Williams will get greater opportunities for that. However, in light of Morgan's absence, would it really surprise anybody to see the tight ends filling more of the role than anybody else?

Whether we're talking about putting the tight ends into more traditional wide receiver roles, or simply utilizing them more as we currently see them, the 49ers are playing from a position of strength when it comes to their tight ends. They bring incredible athleticism to the table and they block quite well, putting the team in a position to mix them in frequently to pass and rush situations.

This isn't exactly shocking information if you've consistently watched 49ers games this season. However, it is worth noting considering the level of success the 49ers had from three tight end sets. I picked my favorite play for a bit of a modest breakdown.

After the jump, check out a shot-by-shot look at Vernon Davis' first touchdown against the Bucs.

The situation saw the 49ers leading 24-3 on their opening drive of the third quarter. The 49ers were having their way with the Bucs at this point so I suppose only so much can be gained from this breakdown. Nonetheless, given that we'll see plenty of three tight end sets, it is a play to keep in mind against the Lions and really throughout the season. 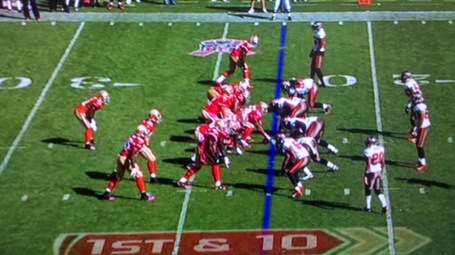 In this initial shot, at the bottom of the screen you see three players in a bunch formation. These are actually the 49ers three tight ends. Delanie Walker is the lead tight end, with Justin Peele back and to Walker's left and Vernon Davis back and to Walker's right. So, this situation shows the 49ers in what might be the only team from which you'll see a trips tight end formation.

The picture doesn't show it perfectly, but the Bucs have nine men more or less "in the box." They have Aqib Talib out wide on Josh Morgan and safety Sean Jones playing back in a more traditional deep spot. The shadow on the bottom right side of the picture belongs to free safety Corey Lynch. He stayed in close to cover Peele coming out of the trips set. 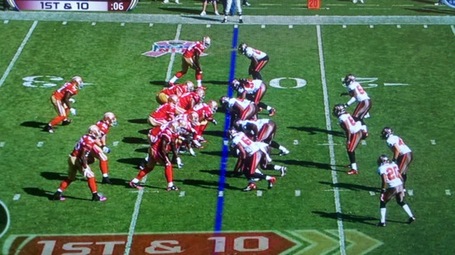 I don't have video, so you'll have to take my word for it, but in the above picture, if you can't tell, Frank Gore is moving in motion to his left. Opposite him, Bucs linebacker Geno Hayes is mirroring Gore and moving to his right. Based on what I understand of football, we're seeing a bit of a giveaway that Hayes is in man coverage on Gore. 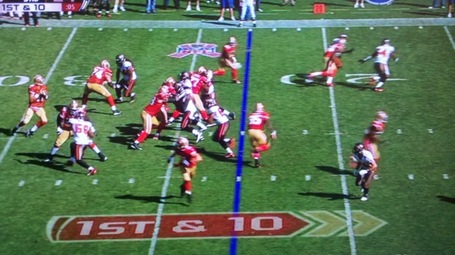 This picture shows Smith dropped back after the snap. Peele is going into the right flat, Walker is running an up and in pattern (we'll see more of that below), and Vernon Davis is running a little crossing pattern over the middle. As you can see, Geno Hayes (#54) has pulled out of the middle. He looks like he is doubling up on Morgan, but he basically crossed paths with Aqib Talib and was picking up Gore out of the backfield.

As this above picture shows, if Alex had been required to go into a quick Captain Checkdown mode, he had Gore to his left and Peele to his right in the flat. Neither would have gotten a first down, but could have gotten some decent yards for the 49ers. Fortunately, for the 49ers, Tampa sent two bliters up the middle, which completely cleared out the field for Vernon Davis. 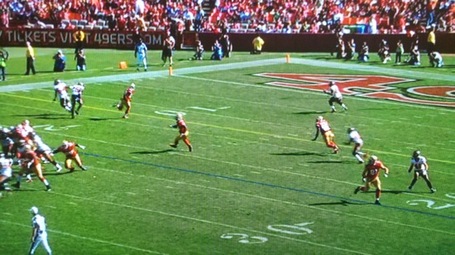 This shot is a later replay FOX showed during the subsequent Bucs drive. As you can see, there is nobody within a good ten yards of Vernon Davis. Alex fired to Vernon who then turned up field and scored his touchdown. As this shot shows, Ronde Barber is covering Delanie Walker to Davis' right (Peele vs. Lynch is at the right edge of the picture). He was able to catch up to Vernon after the catch, as shown below, but his angle of attack left him on his knees trying to grab Vernon below the waist. Not gonna work. 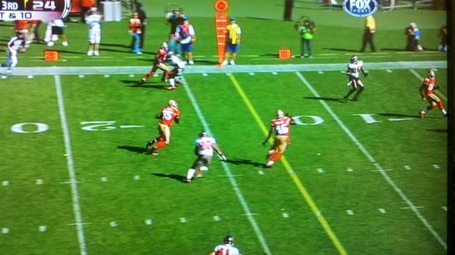 This final shot shows Barber closing on VD, but as I said above he would quickly be coming in behind Davis and unable to properly tackle him. What is sort of interesting is that you see Aqib Talib at the top right of this shot. He saw Davis with the ball but made barely even a half hearted attempt to go after Davis. I am guessing it was after this play when Davis told Barber to get his guys playing harder. Sean Jones made the final tackle into the end zone, but Walker got a chip in to slow him down and Davis scored.

This shows a mix of the value of the tight ends and also the value of Alex Smith being so solid at picking up the blitz. When a team can go with hybrid heavy-spread formation, they are extremely dangerous. More importantly, as I was discussing with Florida Danny last night, the scheming and play-calling helped get Alex's first option open.

In year's past, the blitz would have overwhelmed the line, or Davis might have been covered, and Smith would have quickly checked down. This year, he hit his guy and there was plenty of room to spare to get in for the score. It really is a thing to behold when an offense is clicking like this.

It is not at all surprising that Greg Roman and Jim Harbaugh are mixing in all sorts of tight end formations. During Harbaugh's time at Stanford, and even now after he has left the program, the Cardinal have dominated in part thanks to strong tight end play. They can show you power and from there either run you over or carpet-bomb you to no end. It may not be "flashy" like some other spread-out offenses, but it is a sort of punch you in the mouth spread attack.