Aldon Smith Brings His Own Brand Of #BeastMode

Share All sharing options for: Aldon Smith Brings His Own Brand Of #BeastMode

With all apologies to Seahawks running back Marshawn Lynch, our own Aldon Smith might be worthy of the Beast Mode moniker. There are plenty of other possibilities out there, so feel free to work up some possible nicknames for the terror that Aldon Smith brings to offensive linemen and quarterbacks.

For this past week's game against the Tampa Bay Buccaneers, in lieu of a snap-by-snap breakdown, I took a look at his two sacks. He sacked Josh Freeman in the second quarter and sacked Josh Johnson late in the fourth quarter. The two sacks provided a glimpse into both his power and athleticism. The power is huge for sacks, but his general athleticism could help him develop into an all-around outside linebacker.

This first sack came with a little under four minutes remaining in the second quarter. The Bucs had a 3rd and six, which meant nickel situation and enter Aldon Smith. 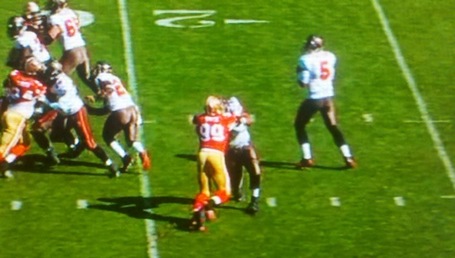 Smith was lined up at right defensive end opposite left tackle Donald Penn. Although Smith was basically standing up on the play (as opposed to being in the 3-point stance), Ricky Jean-Francois as off the field, leaving Justin Smith and Ray McDonald as the only two traditional defensive linemen. I mention this because yesterday there were some questions about whether Smith's sacks on Sunday came as a DE or OLB. They came as a DE.

As the picture above shows, Smith has engaged Donald Penn. Penn has begun sliding to his left trying to block Smith away from Freeman, who was operating out of the shotgun.

The next two picks should be viewed in succession. 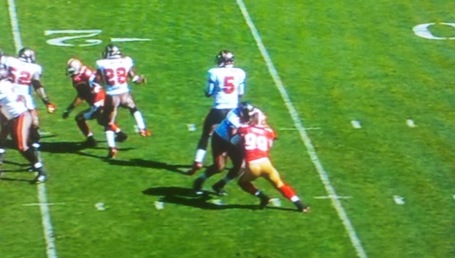 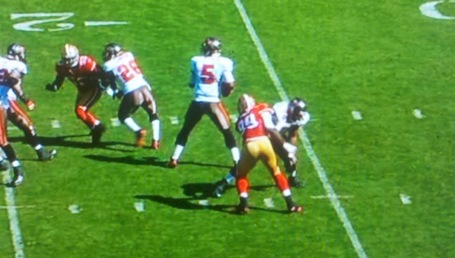 The first of these two pictures shows Smith sort of leaning to his right and then the second picture shows him back to his left and basically jerking Penn out of the way. This is what I meant when I referenced his strength. He basically threw Penn aside like he was nothing. 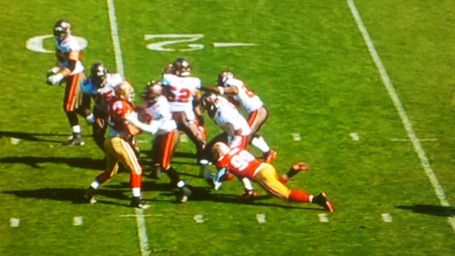 And Smith gets the sack. One of the things that was a little less than spectacular on the play was that he went down to the ground rather quickly to make the sack. The fact that he was able to take down a physical guy like Freeman was helped by the collapsing pocket, but ideally he would stay on his feet a bit more to gain some additional leverage. In reviewing the film, he appeared to slip a bit so it might not be his fault, but that is something to work on a bit. He actually had a similar play when going after Michael Vick, and given how shifty Vick can be, staying on your feet is going to be better in the long run.

Aldon Smith's second sack came after Josh Johnson entered the game in the fourth quarter. Once again, he was at the right defensive end opposite Donald Penn. It's worth noting that Demarcus Dobbs and Ian Williams both got playing time on this particular drive. 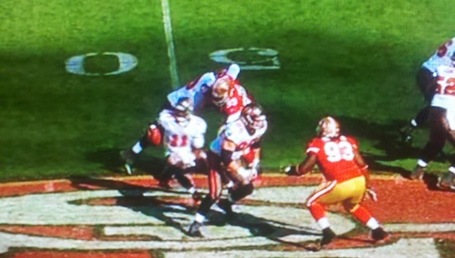 The Bucs were in a shotgun formation and once again Smith was able to get pressure against Penn. He pushed him back towards Johnson and was just about to get around Penn when Johnson spun out of the way. 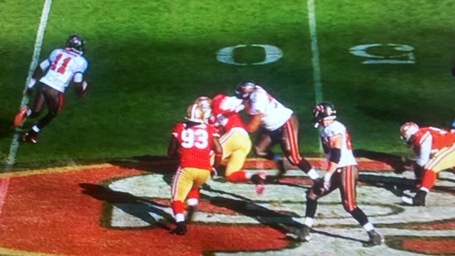 Johnson rolled out to his left and Smith appears to be losing his footing as Penn tries to push him away from the scrambling Johnson. Right after this picture, Penn gave Smith a shove to send him a little further outside and away from Johnson. 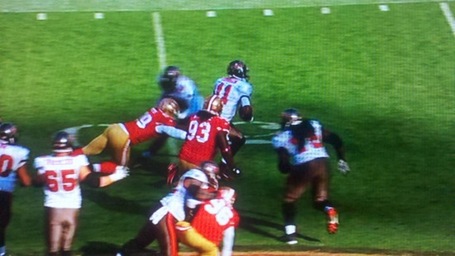 However, Smith quickly recovered and caught up with Johnson. Prior to this picture, Johnson stopped on a dime and had a sort of quasi-pump fake. This slowed him just enough that Smith was able to gain ground. This picture is just prior to Johnson going down. There would still appear to be a solid foot of space, if not more between Smith and Johnson. After seeing Smith use his power, let's see him use his ridiculously long arms to take down Johnson. 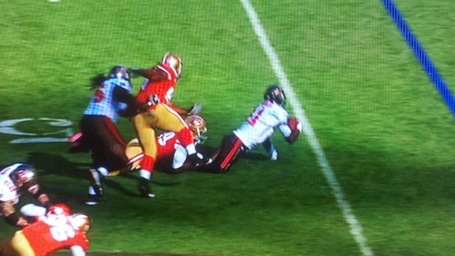 And down goes Johnson! Smith had to dive to make this tackle as there was enough space that Johnson might have been able to get away otherwise. Smith used his freakishly long arms to grab hold of Johnson. Mix in that strength and Johnson was not getting away.

In only five games, Aldon Smith has quickly developed into a fearsome pass rushing weapon. He has plenty to improve upon, but his raw strength and athleticism are absolutely filthy. He has shown some pass rush moves but on these two sacks he appears to have relied primarily on his power and athleticism to win the one-on-one battles. As he learns and utilizes other pass rushing techniques, he could be an even more dominant force for the 49ers.